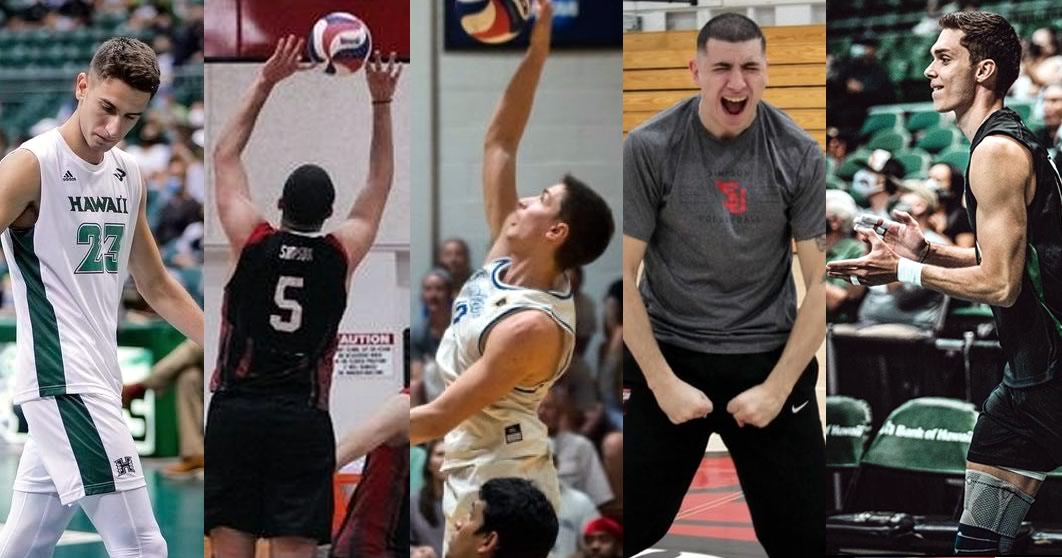 Dimitris Mouchlias & Spyros Chakas
2022 started off the right way for Mouchlias and Chakas’ Hawaii University! With 4 wins in 4 matches, the Rainbow Warriors are preparing for their regular season by playing with teams outside their conference. The Greeks of Hawaii started very dynamically, with incredible stats recording two wins against Loyola (3-0, 3-1). Overall in both matches, Mouchlias had  20 [9-11] kills, 1 assists, 1 ace, 7 [3-4]  blocks and 13 [7-6]  digs and Chakas had 11 [8-3] kills, 1 assist, 1 ace, 4 [2-2] blocks and 4 digs. HU then welcomed Edward Waters at their home gym on January 14th and 16th. The Warriors were bad hosts, as they literally swept them in 3 sets in both matches, with all the players of the team getting playing time. Overall, Mouchlias had 7 kills, 2 blocks, 2 digs and Chakas had 12 kills, 2 blocks and 4 digs.

Angelos Mandilaris
Another great start for Mandilaris' Ball State with 3 wins in just 3 matches against Maryville University, Tusculum University and George Mason University. The Cardinals won in 3 in all 3 matches without leaving room for the opponents not only to reach more than 20 pts per game, but also not to reach double-digits. The graduate student from Chalkida participated only in the last match against George Mason, where he outdid himself and finished the match being the top scorer with 20.5 points and having the 2nd highest hitting percentage (58.3%). More specifically, he recorded 16 kills, 1 assist, 3 aces, 3 blocks and 3 digs.

Mixalis Kagialis & Nikos Klagasidis
Obligations have also started for Simpson University, Kagiali and Kalagasidi. Unfortunately, their season did not start perfectly as they suffered two defeats. On the 22nd, the Redhawks were defeated by #7 Menlo College in 4 despite the amazing appearance of the Greeks. Kagialis, being his team’s first scorer with 11 points, had 9 kills with 52.9% efficiency, 1 ace, 1 block and 2 digs and Kalagasidis had 2 kills, 33 assists, 1 block and 8 digs. The next day, they fought so hard but couldn’t make it as they lost to Hope International University in 5. The Athenian middle recorded 8 kills, 1 dig, 2 block assists and 2 solo blocks and the setter from Thessaloniki had 4 kills, 40 assists, 7 digs and 3 block assists.

Next obligations:
28/01 vs Hope International University
29/01 vs # 3 Vanguard University