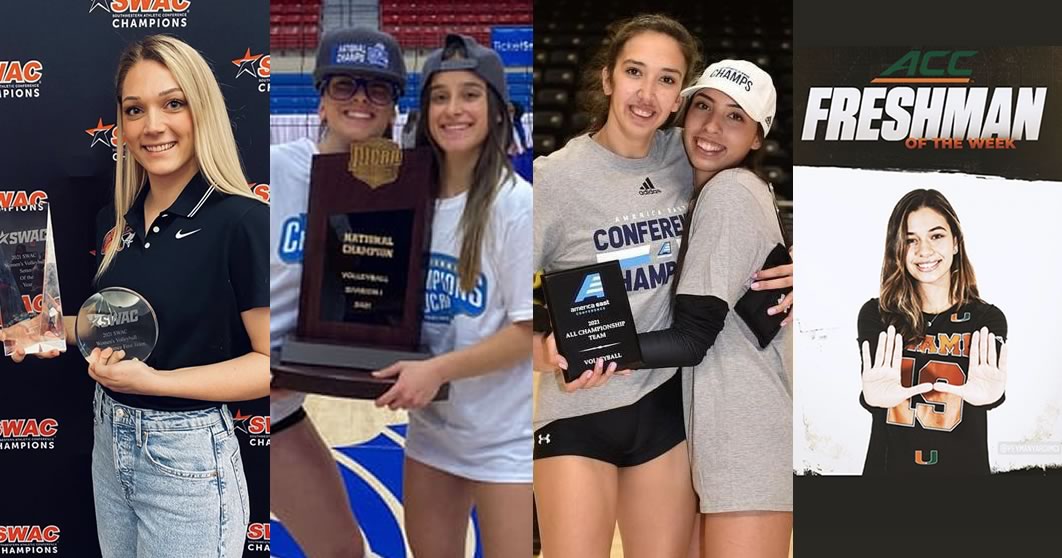 Ozkan’s Iowa Western won the NJCAA D1 National Championship for the 2nd season in a row and Duru had a new career high of 9 assists… twice! Beste Ayhan and Mila Ilieva’s UMBC claimed the 2021 America East title and Irem Ucar’s FAMU the 2021 SWAC title! New career high for Ucar with 61 assists, Suvarioglu with 42 assists and Yardimci with 9 blocks! More double-doubles for Sabire Karacaova with 17 kills and 17 digs and Peyman Yardimci with 16 kills and 11 digs! Peyman also received her second ACC Freshman of the Week award in November! Ucar made it to her school’s record book, in the All-SWAC 1st team and was named SWAC’s setter of the year!

Ozkan’s and Rana Kamis’ Iowa Western (33-4) won their second consecutive national title in a five-set thriller against New Mexico Military at the 2021 NJCAA Division I Volleyball Championship! After falling to Jefferson (MO) in the Midwest A District final, Iowa Western swept their first two opponents, #9 Polk State and #1 Blinn, and battled No. 5 Missouri State-West Plains in the semifinals, dropping the first set but ultimately prevailing to defend their title. From the 18th till the 20th of November, the Turkish libero recorded 28 assists, 1 ace and 56 digs, continuing to break records till the last moment! In the final against NMMI, Duru had a new career high of 9 assists while also recording 14 digs, being a breath away from another double-double. More specifically, Duru recorded:

The second-seeded FAMU volleyball team took care of business last Friday night by capturing a straight-set (25-16, 26-24, 25-23) victory over seventh-seeded Prairie View in the 2021 SWAC Championships. Setter Irem Ucar tallied 45 assists, had 2 kills, 5 aces, and 8 digs. The Rattlers earned their 18th sweep of the season. The tournament opener was also a historic night for Irem Ucar, who entered the school's record book. Ucar moved to 9th all-time in single-season assists with a total of 1.065! FAMU volleyball moved to the SWAC Championship finals by posting a 3-2 victory over No. 3 Arkansas-Pine Bluff Saturday. Irem Ucar, who was selected for SWAC setter of the year and All SWAC First Team, finished with 11 digs, 2 kills, and a season high 61 assists. The 2021 Southwestern Athletic Conference Volleyball Tournament Championship was a great level volleyball match with Florida A&M defeating Jackson State 3-2 to earn the SWAC Championship title. The 2021 SWAC Setter of the Year, Irem Ucar, was instrumental in the stretch with 54 assists.She also had 2 kills, 1 ace, 4 blocks, and 16 digs. FAMU will make its first appearance in the NCAA Tournament since 2009.

What an incredible week for UMBC volleyball! UMBC hosted the American East Tournament on Friday and Saturday, November 19th and 20th, after finishing undefeated in the regular season. The Trievers fought every second of the tournament and managed to win the second-straight America East title. The girls played against Stony Brook in the semifinal and won in a 5-set battle (25-22, 25-27, 27-25, 19-25, -15-17). Beste Ayhan led the team’s block with 10, from which 2 were solo. She also had 2 kills, 1 assist, and 4 digs. Meanwhile, Mila Ilieva had 8 kills, 2 blocks and 1 dig. The next day, the girls played against Albany and while they lost the first 2 sets, they came back reverse-sweeping UAlbany and won the match (25-22, 25-18, 10-25, 19-25, 10-15). This time Mila was the one who led the blocks for UMBC  with 9, in addition to her 6 kills, 1 assist, and 2 digs. Last but not least, Beste helped the team with 3 kills, 1 ace, 7 blocks (1 solo), and 5 digs. Beste celebrated being named on the All-Conference Team, while also clearly meriting AEC All-Conference honors given her top stats in the conference in blocks (1st), hitting percentage (2nd), and serve aces (5th).

Riding a 20-game winning streak heading into the NJCAA Division I national championship, the 6th-seeded New Mexico Military Institute Broncos (33-5) were trying to achieve something that had never been done before in program history. After sweeping Tyler Junior College in the opening round of NJCAA tournament, #3 Miami Dade College in the quarterfinals, and #2 Butler CC in the semifinals, the Broncos gave an amazing fight at the finals against Iowa Western in order to be named the top team at NJCAA DI. They fought hard until the very end, however Iowa Western captured its 2nd-straight national title in 5 sets. Karya Suvarioglu had the best performance of her career in the American arenas and she ended her freshman year raising the bar even higher after breaking her previous personal record of 30 assists with 42! More specifically, on the 18th against TC and MDC she had 1 kill, 16 assists and 3 blocks and 1 kill, 26 assists, 3 digs and 5 blocks respectively. Then  on the 19th in the semifinals, she recorded 25 assists, 5 digs and 1 block, while in the big final she had 42 assists (career-high), 7 digs and 4 blocks.

University of Miami volleyball added two more wins this past week, and is heading into the last week of their regular season, being in the third place of ACC with an overall record of 14-3. The Miami Hurricanes managed to beat Florida State in a 5-set thriller match on Friday, November 19th and then the girls outperformed UNC and won in 4 on Sunday, November 21st. Peyman Yardimci contributed to the 2 wins as she had 2 great performances. On Friday, she had a double-double with 16 kills and 11 digs, along with 1 block, while on Sunday, she scored 16,5 points consisting of 11 kills, 1 ace and 9 blocks, which was a new career high! Also, she had 3 digs on the same match. With these solid outings, Peyman garnered her second ACC award as Freshman of the Week, and continues her battle for Freshman of the Year in one of the most competitive conferences this year; worth noting that the ACC has 3 of the top-6 teams in the RPI rankings (Louisville #1, Pitt #2, and Georgia Tech #6) and 5 of the top 15 (Miami at #11 and Florida State at #14).

One win and one loss for UCSD volleyball this past week. The girls played against Long Beach State on Friday, November 19th, and lost in 3 while they won over Cal State Fullerton on Saturday, November 20th in a 5-set battle. The Tritons are one week away from the end of their regular season and their overall is 7-11. Sabire Karacaova had 10 kills, 4 digs, 3 blocks from which 1 was solo, and 1 assist in the first match. The young outside from Istanbul had an incredible performance against Cal State Fullerton as she had a double-double with 17 kills and 17 digs, along with 2 blocks and 1 ace.

Tyler’s journey to the NJCAA D1 National Tournament came to an end last Friday. The Apaches lost the matches on the 18th against New Mexico Military Institute and 19th against Jefferson College  and were not eligible to continue. In the first match, Koleva had 2 kills, 24 assists, 9 digs and 2 blocks while in the second she had 1 kill, 13 assists, 3 digs and 1 block. Koleva’s Tyler finished the season with an overall record of 26-13 (12-6 conference) being in the top 20 teams of NJCAA. Alexandra is still ranked 4th for total assists and assists per set.

Auburn University volleyball played twice with the best team of the SEC conference this past week. Unfortunately, the Tigers lost on Saturday, November 20th, and Sunday, November 21st, against Kentucky in 3, and they are heading into their last match with a conference overall 5-12. Elif Su Yavuz had 4 kills, 1 assist, 1 block, and 2 digs for both games.

Chicago State University volleyball played its last game for this WAC season on Thursday, November 18th. The Cougars made it to the WAC Tournament, and they battled till the last point, however they lost in the first match against Stephen F. Austin in 5 sets. Erol Ece contributed with 1 kill, 2 assists, 1 ace and 6 digs. Meanwhile, Ezgi Dokuzlar had a good performance with 7 kills, 1 block and 1 dig.

The Seton Hall volleyball team dropped a 3-0 loss on the first day of its Big East Conference matchup weekend. Setter Cagla Bengi had 5 assists and 6 digs while Tsvetelina Ilieva had 2 aces, 1 block, and 2 digs. Seton Hall then  finished the 2021 season in a 3-0 loss to Providence on Sunday. Cagla Bengi 11 assists and 8 digs while Tsvetelina Ilieva had 3 kills and 7 digs. SHU ended with a 14-18 overall and 6-12 in the BIG EAST.

Facing a 2-0 deficit, the UTEP University women's volleyball team hit another reverse sweep to win its C-USA championship, topping FIU in epic fashion Friday evening. The set scores were 3-2 (24-26, 21-25, 25-14, 25-23, 15-8) in favor of the UTEP Miners. UTEP’s setter Hande Yetis tallied 25 assists and had 4 digs. The 2021 season of UTEP volleyball concluded with a 3-0 defeat to No.18 Western Kentucky in the semifinals of the C-USA Championship. UTEP’s setter Hande Yetis tallied 15 assists, had 2 aces and 3 digs.

The Blue Raiders swept North Texas Friday afternoon and are moving onto the semifinals for the first time since 2011. Melisa Tore helped her team with 1 ace while Melisa Nur Temiz helped with 6 kills, 2 aces, 1 blocks, and 5 digs.  The University of Middle Tennessee volleyball team saw its season come to an end last Saturday afternoon after falling in straight sets to Rice, the highest ranked RPI team in conference,  in the semifinal round of the 2021 Conference-USA Championships. Melisa Tore had 1 ace and 1 dig while Melisa Nur Temiz had 6 kills and 6 digs. The Blue Raiders conclude the campaign with a 9-11 record. Despite the sadness for that loss, Middle Tennessee has a bright future, having their best season since joining Conference USA in 2013.