Papageorgiou the most efficient! Friday the 13th or Faki with 13? Psoma with a new career high! Titles and rankings for Mpampiri, Bakodimou and Kathariou! 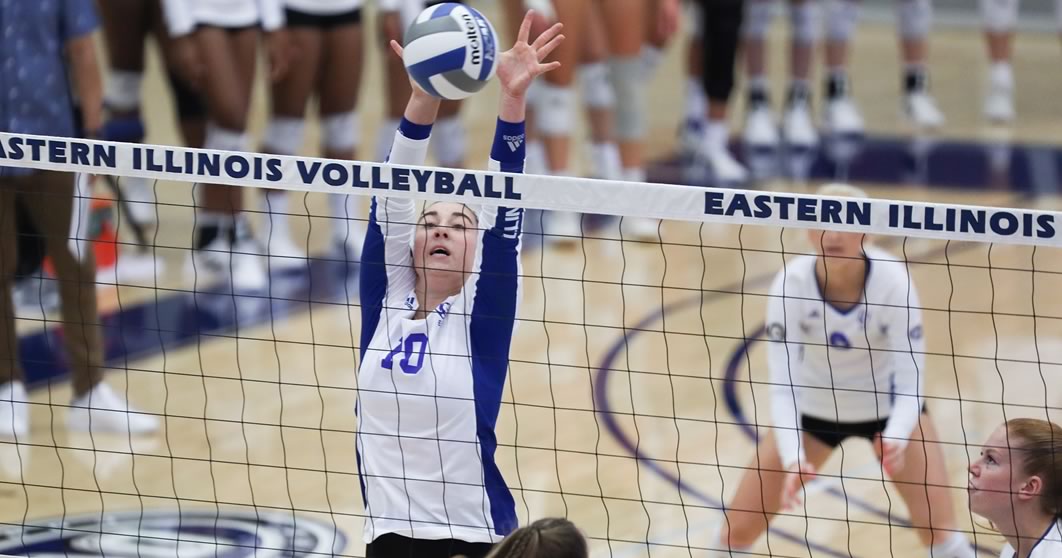 Papageorgiou outdid herself in a historic win against Austin Peay and showed hard work makes the dream work! Faki, Psoma, Anagnostou and Karakasi recorded double doubles, significantly enhancing the performance of their teams. In fact, Psoma, with her new career high of 22 kills, was only 4 kills away from the highest number of kills (26) for SSC this season. Mpampiri in the 2nd All-Conference team! National rankings for Bakodimou, 3rd in NCAA for aces, and Kathariou, 2nd in NCAA for blocks!

Papageorgiou and Eastern Illinois had two matches against Austin Peay this past weekend of competition, recording one win (first time in 7 years!) and one loss with 3-1 and 1-3 respectively. Strong performances by Papageorgiou. In the first match she had 11 kills, 2 aces, 1 block and 3 digs, while in the second she had 5 kills, 1 block and 6 digs. With this past weekend’s results, Eastern Illinois secured their spot to the OVC conference tournament.

Elena Karakasi had two double-doubles last week. Syracuse University (16-12, 5-11) got defeated by the University of Pittsburgh, which is ranked third in the nation according to the AVCA coaches polls, in a five-set thriller match. In this match, the Greek setter had 45 assists, 13 digs and 3 kills, with 60% attacking efficiency. On November 14th the ‘Cuse Orange were defeated (1-3) by Florida State University. Karakasi was the leader for the Orange as she had 36 assists, 16 digs, and 1 kill (with 50% hitting efficiency).

Bakodimou’s Towson (23-4,11-4) ended last week with the addition of two victories. Fay's performance fires up after she had 16 kills, 4 aces, 3 blocks and 7 digs after the 3-1 victory on Saturday 13/11 against Northeastern (12-13, 8-7). And the next day with the same opponent Fay had the same very good performance with 9 kills, 2 aces, 3 blocks and 6 digs. With these two wins, Towson repeated the usual feat for them, clinching the regular season CAA title; they will now head into the CAA tourney in hopes of repeating the last few years’ NCAA postseason run. Fay continues to lead her Towson troops, and further establishes herself nationally (3rd in aces overall in the NCAA) while instrumentally contributing to one of the NCAA’s traditionally most competitive squads.

Stefania Anagnostou was unstoppable last week and led Indiana University of Pennsylvania (18-14,8-8) in 2 wins for the PSAC regular-season championship. In the first match of the week, against Pitt-Johnstown, Anagnostou had an impressive performance and she had a double-double for the Crimson Hawks (10 kills, 11 digs). On November 13th Anagnostou’s team defeated Clarion University in a 5 set-thriller match. The Greek outside hitter played a key role in defense as she recorded 8 digs, 3 kills, and 2 assists.

Stamatiou’s Bellarmine wrapped up its season with a loss against EKU (1-3). Despite the result, Stamatiou had a really good performance during the last match of her collegiate career. More specifically, the Greek outside hitter had 9 kills, 2 aces, 5 assists, 2 blocks and 12 digs.

Super Charitonidi and two wins against Tarleton (3-1) and Abilene Christian (3-0) for UTRGV, which helped secure a spot to the WAC conference tournament. More specifically, during the first match, the Greek outside hitter had 6 kills, 1 ace, 1 block and 12 digs, while during the second match she added 8 more kills, 2 assists and 8 digs.

Loss for Baka and St Mary’s College against Pacific (1-3) this past weekend of competition. Good performances from the Greek outside hitter, despite the result. More specifically, Baka had 7 kills, 3 blocks and 11 digs.

Tselepi and Quinnipiac split this past weekend of competition with one win and one loss against Manhattan (3-0) and Iona (2-3). Tselepi saw action in both matches, as she recorded 13 kills, 3 blocks and 8 digs overall.

Loss for Oakland City and Anastasiadi at the RSC quarterfinals against Indiana University East (0-3). The Greek setter saw action throughout the whole match as she had 12 assists and 3 digs.

Busy week for the Azusa Pacific (17-9, 12-6). Georgatzi’s school played six matches last week. The Cougars got defeated twice by Chaminade (3-1 and 3-0) and Hawaii Pacific University (3-2 and 2-3). On the other hand, the matches against Hawaii at Hilo, Azusa Pacific recorded one win and one loss (both matches went to the fifth set). Ioanna Georgatzi had a great impact on the offense of the Cougars as she recorded 18 kills, 10 block assists, 2 solo blocks, and 3 digs concluded in all six games for the Cougars. Important to note, that Ioanna significantly helped power her APU teammates to the hard-fought 3-2 win in Hawaii, with her best output of her collegiate career, recording 8 kills in 27 swings, 7 blocks, and 12.5 points overall.

The Phoenix defeated Youngstown State and Robert Morris University in two thriller matches with Hounta having a big impact on offense and defense. The University of Wisconsin Green Bay (14-15, 9-8) defeated Youngstown State in a five-set thriller match, the Greek outside attacker helped the Phoenix as she had 4 kills, 6 block assists, 2 aces, and 9 digs. In the second match of the week, the Phoenix defeated RMU (3-2) and recorded another win to continue their obligation in the Horizon League championship. Iro recorded 2 kills and 5 digs.

Hard week for Temple University (5-22, 4-12). On November 12th the Temple Owls played against Wichita State, Papazoglou played a key role in the front and back row, as she had 8 kills, 11 digs, 1 assist, and 1 ace. The match ended in favor of Wichita State. In last week’s second match the Owls got defeated by Tulsa. The Greek outside hitter helped her team defensively and she had 6 digs.

Another win was recorded by the University of Miami (21-4, 9-1) against Clemson University on November 13th. The Greek middle blocker had a great performance against the Tigers and led her team to a 3-0 clear win. Tontai was 59% effective in offense and she had 12 kills, 7 block assists, and 1 solo block for the Canes.

The University of the Pacific (12-14, 7-2) obtained a great win against Saint Mary’s College as they continue their journey in the West Coast Conference. Darina Kumanova helped her team offensively and defensively to record a 3-1 win over the St. Mary’s Gaels. The Bulgarian outside hitter had 9 kills, 7 digs, and 4 aces for the Pacific Tigers.