Ariadni Kathariou - Third and a charm overall in total blocks in NCAA D1.  Excellent hitting efficiency from the middles Kathariou, Mpampiri and Tontai!  More double-doubles for Faki and Hounta! 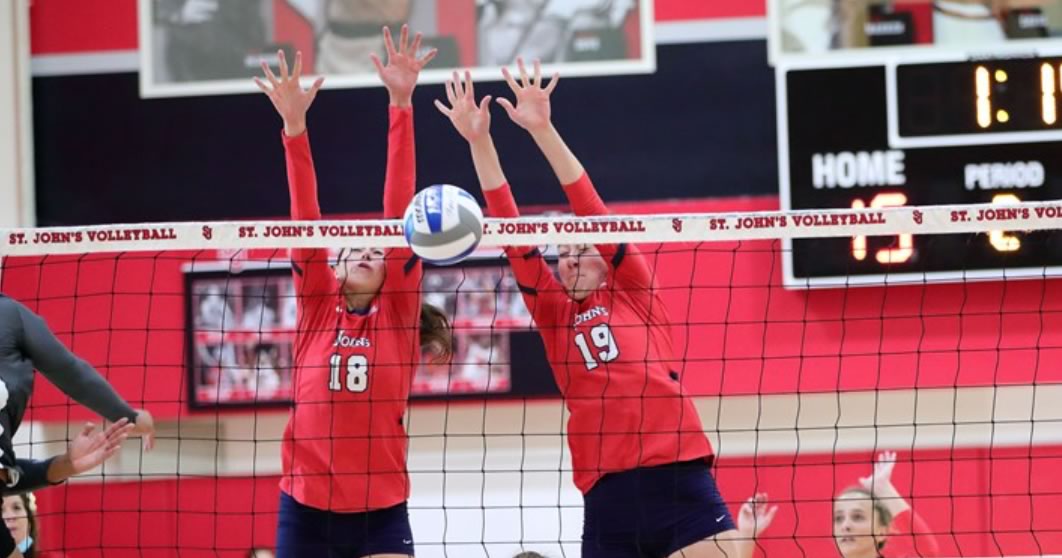 The Greek middles are having a blast in the States! Kathariou is further establishing herself as one of the premier blockers nationally this season, sitting at #3 nationally in total blocks, only one block behind second place… In the match against Marquette University, had 15 kills with 0 hitting errors, a performance that put her on the Big East Weekly Honor Roll! Along her side, Mpampiri and Tontai with 55% and 66.7% hitting efficiently respectively, significantly continue to help their teams. More good performances, so more double-doubles! Last week, two Greek players recorded double doubles, enriching their bios even more. Strange is the fact that both of them had 10 kills and 12 digs, with Faki in the match against Fresno State and Hounta against Cleveland State.

Ariadni Kathariou
With a weekend of crazy battles despite the result, Kathariou continues the very good performances for Red Storm! Analytically, on Friday 5/11 and against DePaul University with a 3-1 defeat she had 13 kills, 1 ace, 5 blocks and 2 digs! The next day and in the 5-set thriller against Marquette University she scored 15 kills (0 errors) 3 aces, 6 blocks and 4 digs!
Next obligations
12/11 VS UCONN

Marialena Mpampiri ended the regular season of her senior year as a true leader in hitting efficiency. The senior middle blocker was the most productive player for her team in their last 2 matches for the end of their regular season. Lyon College (12-17,13-6) defeated Harris Stowe University 3-0, Mpampiri was 55% effective in the offense for the Lady Lyons and had 6 kills, 1 assist, 1 block, and 3 digs. In the final match of the season, against Missouri Baptist, the Greek player was 44% effective with 5  kills, 1 dig, and 1 block.

Tontai played a key role in the offense for Miami Canes in last week’s matches. The University of Miami (19-4,8-1) played against Georgia Tech, on November 5th. The Greek middle blocker was 66,7% productive in offense as she had 10 kills. In the second match of the week, Miami defeated Clemson University in a clear win 3-0. Tontai helped her team in blocks and offense had 7 kills, 5 block assists, and 1 solo block.

Zoi Faki
The double-doubles for the Greek outside hitter and the good appearances continue! On Monday 1/11 San Diego State University (7-18,4-9) scored a 3-2 victory against UNLV with Zoi having 16 kills, 1 ace, 1 block and 7 digs. The double-double, however, did not take long to come since Faki, against Fresno State on Saturday 6/11, had 10 kills, 3 aces, and 12 digs !!
Next obligations:
11/11 VS Air Force

The University of Wisconsin Green Bay (13-15, 8-8) had two impressive wins last week over Oakland University and Cleveland State. Iro Hounta played key roles in the front and back row for the Phoenix, while Zoi Sheroli helped significantly from the service line. In the first match of the week against Oakland (3-0), Iro Hounta had 8 kills, 3 aces, and 13 digs. In the match against Cleveland, State Hounta had an impressive performance as she made a double-double for the Phoenix with 10 kills, 1 ace, and 12 digs. Zoi Sheroli helped from the back row as she had 4 aces and 4 digs.

Efrosini Bakodimou
Fay sits at 4th overall in serve aces and 7th on the aces/set list.
The girls of Towson University (21-4,9-4) ended this two-day match against James Madison University with a victory and a defeat. In more detail, Fay had 8 kills, 1 ace, 1 block and 3 digs on Saturday 6/11 (3-0 loss). And on the day of the 3-1 victory she had 11 kills, 1 ace, 1 block and 2 digs.
Next obligations:
13/11 VS Northeastern University
Alexandra Psoma
The good performances for "Alex" continue despite the 2/3 defeats this week. In detail, Alexandra had 8 kills, 3 aces, 2 blocks and 10 digs against Palm Beach Atlantic University on 2/11. And on 6/11 against Embry Riddle with a 3-1 defeat she had 9 kills, 1 ace, 2 blocks and 9 digs.
Next Obligations:
11/11 VS Florida Southern
Chrysanthi Stamatiou
Two losses for Stamatiou’s Bellarmine against UCA (1-3) and Lipscomb (0-3). The Greek outside hitter saw action in both matches. In the first match, Stamatiou had 7 kills, 3 aces, 2 assists, 2 blocks and 9 digs, while at the second match she had 4 kills, 1 assist, 1 ace and 6 digs.
Next Obligations:
13/11 vs EKU
Ioanna Charitonidi
Win for Charitonidi and UTRGV (15-9,6-4) this past Saturday against Lamar (3-0). Charitonidi saw action throughout the whole match, where she had 2 kills, 1 ace and 8 digs.
Next Obligations:
11/11 vs Tarleton
13/11 vs Abilene Christian
Elena Baka
One loss and one win for St Mary’s College (14-9,8-6) and Baka against Pepperdine (1-3) and Loyola Marymount (3-0). Good performances from Baka during both matches. More specifically, in the first match Baka had 12 kills, 2 aces, 2 blocks and 8 digs, while in the second one she had 8 kills, 1 assist, 1 ace and 3 digs.
Next Obligations:
12/11 vs Pacific
Elisavet Papageorgiou
Good performances for Papageorgiou despite the losses for Eastern Illinois (10-16,3-13) against Tennessee Tech with 1-3 for both matches. The Greek opposite hitter had 7 kills, 3 blocks and 5 digs overall.
Next Obligations:
12/11 vs Austin Peay
13/11 vs Austin Peay
Marianna Anastasiadi
Two losses for Oakland City and Anastasiadi to conclude their regular season within the RSC conference, against Indiana University Southeast (0-3) and Midway University (0-3). The Greek setter had 1 kill, 14 assists and 8 digs overall.

Two important wins for Indiana University of Pennsylvania  (16-14, 6-8) last week. Anagnostou’s Crimson Hawks defeated Salem University (3-0) and Slippery Rock University (3-0). In the match against Slippery Rock Stefania Anagnostou, had 7 kills, 2 aces, and 3 digs. In the third match of the week, against the California University of Pennsylvania, the Greek player helped her team in defense and offense had 8 kills, 11 digs, and 1 assist. However, IUP got defeated by Cal U in 3-1.

One win and one loss were recorded by Syracuse University (15-10, 4-9) last week. The Cuse Orange played against Pitt (#3 in the nation). Elena Karakasi performed well with 22 assists and 5 digs. On November 7th Karakasi’s Syracuse defeated University of Virginia in a 3-0 clear win. The Greek setter helped her team to obtain an important win for the ACC conference. Specifically, Karakasi had 24 assists and 8 digs.

Katerina Papazoglou had a great impact on the defense of Temple University (5-19, 1-12) in last week’s matches. The first match of the week against Memphis University ended in favor of the Memphis Tigers (2-3). The Greek outside hitter had 11 digs, 3 kills, and 1 ace. On November 7th the Temple Owls got defeated by  SMU (3-1). Papazoglou had a great impact in the back row for the owls as she recorded 12 digs and 3 kills.

Kumanova helped the Pacific Tigers (11-14,8-6) record a win against LMU (3-1). On November 4th Darina had a great performance 12 kills, 2 aces, and 8 digs. Last Saturday the University of the Pacific was defeated by Pepperdine university (3-0). In that match, the Bulgarian outside had 6 kills and 5 digs.