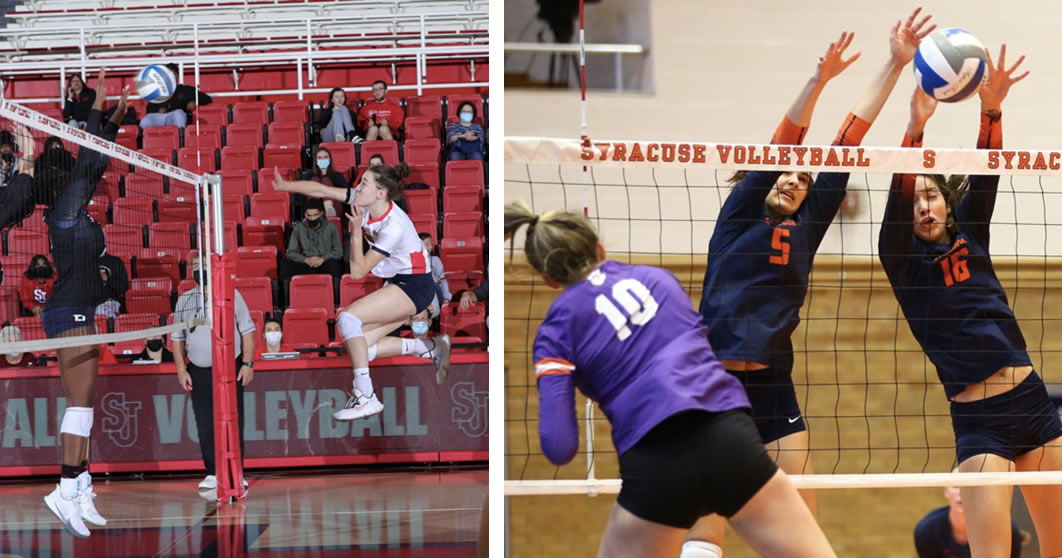 Last week, not 1, not 2, but… 8 Greek internationals recorded double-doubles in their stats! More specifically, the players who had a double-double are Zoi Faki, Alexandra Psoma, Elena Karakasi (two), Ariadni Kathariou (two), Iro Hounta (two), Ioanna Charitonidi, Elena Baka and Olga Zampati. Actually, in her second double-double Karakasi broke her previous personal record of 57 assists from 2019, with 58 against FSU! With this new record output, Karakasi rose to #44 in total assists in NCAA D1. On the other end of the state of New York, St. John was on the road this weekend, travelling to DC to face Georgetown, and to Philadelphia to face Villanova. Ariadni Kathariou helped her Johnnies by setting three personal bests with 14.5 points, 14 blocks (a new Big East record), and 5 assists against Georgetown in a hard-fought 3-2 W. Not letting up, the very next day the Greek Red Storm was out for more damage, raining 10 more blocks and 14 points on Villanova. After this weekend, Ariadni sits at #21 in total blocks in NCAA D1. Words are not enough for these girls…

With Halloween weekend a true "thriller" and games tight in 5 sets, this week closes for St. John’s University. On Friday 29/10 the Red Storm girls faced Georgetown University with a 3-2 victory and Ariadni being on fire as she had 7 kills in 13 attacks, 14 blocks, and 5 assists, destroying her own personal bests and the G-town Hoyas! On Saturday 30/10, in a 2-3 defeat against Villanova University, Kathariou had 9 kills in 19 swings and 10 blocks!

Greek get-together for the two buds from Athens, Aristea Tontai and Elena Karakasi. On October 29th Karakasi’s Syracuse University (15-9,4-8) played against Tontai’s University of Miami (19-3, 10-2). Elena Karakasi had a great impact on her team, as she recorded a double-double with 29 assists, 11 digs, 2 block assists, and 2 aces. The game ended In favor of the Miami Canes. In this match, Aristea Tontai helped her team capture a win against the ‘Cuse Orange and she recorded 8 kills, 2 digs, and 2 block assists. Elena Karakasi’s Syracuse played against The Florida State University this past Sunday (October 31st) and the match ended in favor of FSU (3-2). The Greek setter had an impressive performance as she recorded another double-double with 58 assists, 14 digs, 4 kills, 1 block, and 2 block assists. The same day Aristea Tontai’s Canes defeated Boston College (3-0). The Greek middle blocker had 6 kills, and 5 blocks.


Next Obligations for Syracuse University


Next Obligations for University of Miami

Despite the 2 defeats for San Diego State University (6-17, 3-8) Zoi continues to be a star both in the back and in the front zone! With 11 digs on Thursday 28/10 against Utah State and with a double-double the next day against Boise State the Greek outside hitter is on fire! She had 12 kills and 12 digs! Not to be outdone, a day after Halloween, Zoi put on her… Terminator outfit, and with a huge performance led her SDSU Aztecs to an unprecedented win in Las Vegas against heavy favorites UNLV, receiving Top-25 votes earlier this season, MWC champs, and only this past spring making it to the 2nd round of the NCAA tournament. Zoi’s leadership showed in multiple ways, with 16 kills, 18 points, 7 digs, 3 assists, and a solo block, always finding ways to embolden her young Aztecs’ troops through the experience and intangibles groomed and minted during her 5 years at Pitt. Thus, Zoi and Co. achieved something that appeared unattainable, taking a big away W in Las Vegas, at a most crucial turning point for the Mountain West season, in view of upcoming playoffs later in November.

Psoma continues dynamically with exceptional performances and victories for #17-ranked in NCAA D2 Nova Southeastern (20-2, 11-1). More specifically, in the match against Lynn University, in a 3-2 victory, she had a double-double with 16 kills and 18 digs, along with 2 aces and 2 blocks. On Thursday 28/10 and with a 3-1 victory against Saint Leo University, she had 10 kills, 1 block and 5 digs. In the last game of the week, the girls of Nova Southeastern finished strong with a 3-1 victory against Eckerd. Alexandra had 9 kills, 2 blocks and 5 digs.

Stunning performances by Iro Hounta, with two double-doubles in 3 matches. On October 25th UWGB (11-15,6-8) played against the University of Milwaukee. Hounta had her first double-double of the week with 11 kills, 3 assists, 14 digs, and 2 block assists. The match ended in favor of Milwaukee. In the second match of the week the Phoenix played against Northern Kentucky (0-3 loss) and the Greek outside hitter helped her team recording 2 kills and 5 digs. In the final match of the week, Iro Hounta had a great impact on defense and offense, as she recorded her second double-double for the week. In that match against Wright State, the Greek player had 13 kills (with 31% hitting efficiency), 15 digs, and 4 block assists.

Charitonidi’s UTRGV (14-9, 5-4) started off the week with a win against Texas A&M-Corpus Christi (3-2), but lost their other two matches against Sam Houston (1-3) and Stephen F. Austin (1-3). Despite the results, the Greek outside hitter put up some really good performances. More specifically, during the first match she had 13 kills, 1 ace, 1 block and 12 digs, adding another double-double in her career. During the second match, she had 2 kills, 2 blocks and 10 digs, while in the third match, she had 11 kills, 1 assist, 1 block and 9 digs.

Baka’s St Mary’s College (13-8, 7-5) had yet another successful weekend, adding two wins against Portland (3-1) and Gonzaga (3-0). The Greek outside hitter saw action in both matches and had good performances. More specifically, in the first match Baka earned another double-double with 11 kills, 4 aces, 1 block and 14 digs. In the second match, the Greek player added 7 more kills, 2 aces, 1 block and 4 digs.

One win and one loss for Tselepi and Zampati’s Quinnipiac (8-15, 7-7) against Niagara (3-1) and Fairfield (1-3). The Greek players saw action in both matches. In the match against Niagara, Tselepi had 7 kills, 1 ace, 2 blocks and 6 digs, while Zampati added another double-double with 11 kills, 1 assist, 1 ace and 12 digs. In the match against Fairfield, Tselepi had 4 kills, 2 assists, 4 blocks and 2 digs, while Zampati added 8 more kills and 13 digs.

Fay's team started with a victory where they had a very good performance on Friday 29/10 against the University of Delaware. In detail, Fay had 12 kills, 1 ace, 1 block and 5 digs. On Sunday 31/10 against the same opponent, the girls won 3-2 with Bakodimou as the protagonist as she had 10 kills, 1 ace, 1 block and 8 digs! Fay sits comfortably on the 3rd spot overall for total aces in NCAA D1.

Great way to finish October for the University of Indiana at Pennsylvania (14-13,5-7). Stefania Anagnostou played a key role in the offense and defense for the Crimson Hawks. The first win of the week was recorded against Mercyhurst (3-1). The Greek player had 6 kills, 16 digs, 1 block assist, and 1 ace. On October 30th the IUP Hawks defeated Edinboro University on a 3-1 win. Stefania Anagnostou recorded 8  kills, 8 digs, 1 assist, and 1 ace.

Katerina Papazoglou had a great impact on defense and offense for the Temple Owls (5-18,1-11). Unfortunately, Temple University was defeated (3-0) by Houston University. The Greek outside hitter had 7 kills and 9 digs. On October 31st, Papazoglou’s Owls lost the five-set battle against Tulane. Papazoglou helped her team with 6 kills, 8 digs, and 2 aces.

Lyon College (10-13,1-3) had their third and fourth match for the American Midwest Conference last week. On October 29th, Mpampiri’s school played against Columbia College. The Greek middle blocker had 40% hitting efficiency and recorded 4 kills, 3 block assists, and 4 digs. The match ended in favor of the Columbia Cougars. Their fourth AMC match was against Stephens College Stars. Marialena Mpampiri had a good performance with 7 kills, 1 assist, 2 solo blocks, 3 block assists, and 3 digs.

Last week was phenomenal for Darina’s Pacific Tigers (10-13,7-5). On October 28th the Pacific Tigers defeated the University of Gonzaga in a 3-0 clear win. The Bulgarian outside hitter helped her team to get the favorable result. Kumanova had 7 kills and 9 digs. Darina’s team in the second game of the week defeated Portland University in a 3-set clear win. Kumanova had 6 kills, 5 digs, and 2 aces.

Two losses for Giourda’s Coastal Georgia (21-6, 6-6) within the SUN conference this past week, against Southeastern University (0-3) and Ave Maria University (0-3). During the second match, Giourda had 4 kills, 2 blocks and 2 digs.

More wins for Eastern Illinois (10-14, 3-11) and Papageorgiou, as they beat Tennessee State twice this past weekend with 3-2 and 3-1! Crucial was Papageorgiou’s presence during the two matches, as she collected 8 kills, 5 aces, 6 blocks and 13 digs overall.

Despite a couple of losses for her Columbia Lions this weekend to the two best Ivy League teams, Brown and Yale, Anna managed to show her consistent improvement and growth as a versatile and valuable contributor to the Lions’ Ivy campaign. She had personal bests of (4/12) kills, points, and blocks in the match against Yale. Anna added a couple of aces and digs against Brown.

Collegiate debut for Dankinova this past weekend, as Princeton (13-5, 7-3) faced Harvard and Dartmouth. Despite the two losses 0-3 and 2-3 respectively, Dankinova had 3 kills, 3 aces and 3 digs overall.