Yardimci: she may be a freshman but she plays like a senior! Beste & Ilieva: the double-trouble brings UMBC to the top of AEC! Beste: Turkish Golden Retriever… with golden blocking hands, 4th in NCAA D1! 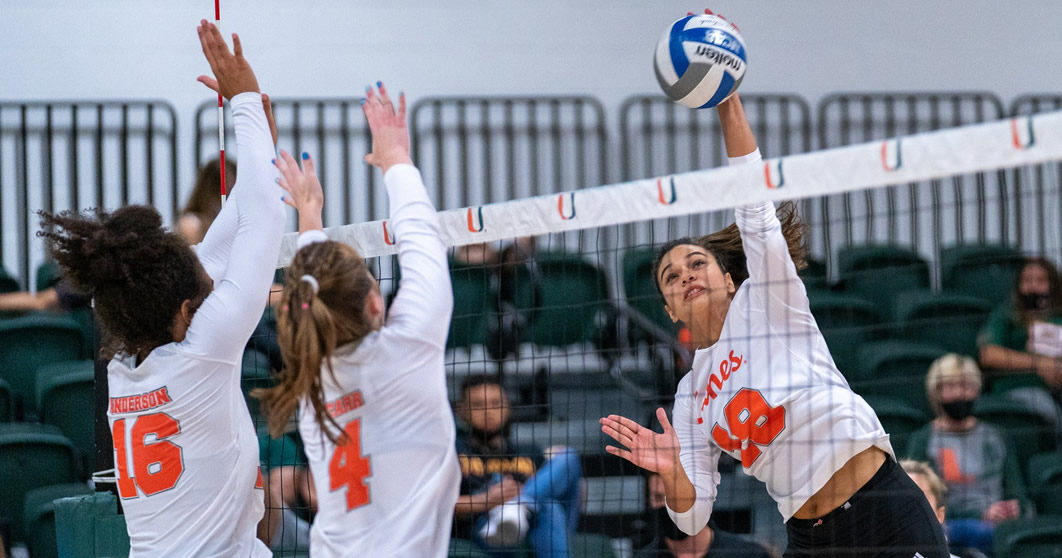 Freshman outside/opposite hitter Peyman Yardimci recorded another double-double last week with 19 kills and 14 digs! Beste Ayhan and Mila Ilieva’s UMBC currently stands at the top of the America East Conference with a conference overall record of 9-0! Also, Beste is the player with the most blocks in AEC and 4th in the entire nation (112 in total)!

With the 2021 regular season winding down, the Wranglers had their last home match of the season last week. Odessa College (13-5 overall, 6-4 conference) went into its match against Frank Phillips College taking control of the match from the start and eventually getting the win in 3 sets. Elif Yasar came back stronger than ever after her back injury and recorded 3 kills, 36 assists and 8 digs. Isil Yilmaz was able to help her team defensively, recording 6 digs.

Didar Ozcan’s College of Southern Idaho(14-9,4-3) started last week with a great win. On the 19th, the Eagles visited Western Wyoming College in their home gym and turned out to be really bad visitors since they defeated them in 4. Didar Ozcan recorded 4 kills,  2 assists and 2 blocks. On the 21st and the 23rd they had two home games against Colorado Northwestern CC and Utah State University Eastern. In the 3-0 sweep against CNCC, Ozcan had 2 kills, 1 block , 2 digs while in the 3-0 loss against USUE the Turkish middle blocker did not participate.

28/10 vs College of Southern Nevada

Koyuncu’s Lincoln Memorial University participated in the SAC/Peach Belt conference challenge last week. After adding two wins and two losses in that tournament, the Lady Railsplitters now have a 7-14 overall record and a 3-8 conference one. On the 22nd, in the loss against USC Aiken, Koyuncu had 3 assists and 14 digs, while in the 5-set win against Lander, Sevgi had 5 assists, 2 aces and 31 digs. The next day, in the 3-2 tough loss against Augusta, the senior libero had 4 assists and 25 digs. The tournament ended with LMU sweeping Georgia College and Sevgi continuing to be dominant defensively as she recorded 29 digs accompanied by 4 assists and 2 aces.

Tok’s  Minot State University(1-18,1-12) needed only three sets to beat the Minnesota - Crookston Golden Eagles last Friday at home. With this win the Beavers recorded their first win of the season! Berra Tok participated in the whole match and had 5 kills, 4 assists, 2 solo blocks, 1 block assist and 2 digs. The next day, they welcomed Bemidji State University at home at MSU Dome. Sadly, MSU could not out-play an opposing Beavers offense and lost in 3. The young Turkish player had 2 kills, 2 assists, 2 blocks and 1 dig.

Suvarioglu’s NMMI does not want to lose their 12 winning streak! Two more wins were added to their current amazing 25-4 record and 9-1 conference record last week. On the 20th, they had the first win of the week against Clarendon College. Suvarioglu did not participate and took that time off to rest for the next match. The second win of the week came against Western Texas College on the 23rd. The young setter recorded 15 assists, 1 dig, 2 solo blocks and 2 block assists.

What a great home weekend for Asli Erdi’s Eastern Wyoming College! The Lancers recorded their 3rd and 4th home win of the season last week against Casper College (3-0) and Western Wyoming CC (3-0). Asli Erdi participated only in the match against Casper and had 5 kills, 1 ace and 3 digs. Including these two dubs, EWC has an overall record of 10-12 and a 5-6 conference record.

#5 Iowa Western added 4 wins and only 1 loss to their record last week making it 27-3 overall and remaining undefeated in conference (3-0). The Reivers played against Indian Hills CC on the 20th, against Missouri State University and Jefferson College on the 22nd and against Illinois Central College and Seward County CC on the 23rd. They only lost in 4 on the 22nd against MSU and won in the remaining ones. More specifically, the starting libero Ozkan had:

Koleva’s Tyler College concluded the 3rd week of October with one win and one loss. The Apaches currently have 19 wins and 10 losses overall, with a 7-6 conference record. On the 22nd, they welcomed Lee College in their home gym and after a match that lasted more than 2 hours they lost in 5. Despite the result, Koleva had another great performance recording 1 kill, 1 ace, 44 assists, 1 dig and 3 blocks, making it the 7th match this season that she has more than 40 assists. The next day, Tyler picked up their 5th home win against Coastal Bend. Koleva had 3 kills, 20 assists and 3 aces.

UC San Diego volleyball had two losses last week. Including the last results, the girls own the 7th place of the Big West conference with a conference overall of 4-6. Last week, they played against Cal Poly and lost in 5 on Friday, October 22nd (15-25, 25-18, 21-25, 25-19, 12-15). The next day, they faced CSU Bakersfield but unfortunately, the Tritons were defeated in 3 (19-25, 19-25, 21-25). Besides her limited play time, Sabire Karacaova, managed to contribute to her team with 6 kills, 3 digs and 1 ace in total, returning to live action after clearing concussion protocol.

31/10 vs University of Arkansas- Pine Bluff

Seton Hall gutted out a sweep over Xavier on Friday night (25-21, 25-11, 25-13). The Pirates as a whole only committed six attack errors for the match, a season-low, and had a season-best in BIG EAST play .404 attack percentage. Setter Cagla Bengi played a big role for attack percentage with 14 assists and she also added 2 aces and 5 digs while Tsvetelina Ilieva had 7 kills, 1 block and 1 dig. The following evening, sophomore Tsevetelina Ilieva had a team-high 10 kills, but that wasn’t enough to beat Butler, 3-0 (23-25, 20-25, 23-25), in Walsh Gymnasium on Saturday. Ilieva was good and efficient, recording 10 kills with only two hitting errors.  She also had 2 digs and 2 blocks while setter Cagla Bengi had 1 kill, 13 assists, 2 aces and 7 digs. With this loss Seton Hall drops to 11-13 overall on the season and 3-7 in the BIG EAST.