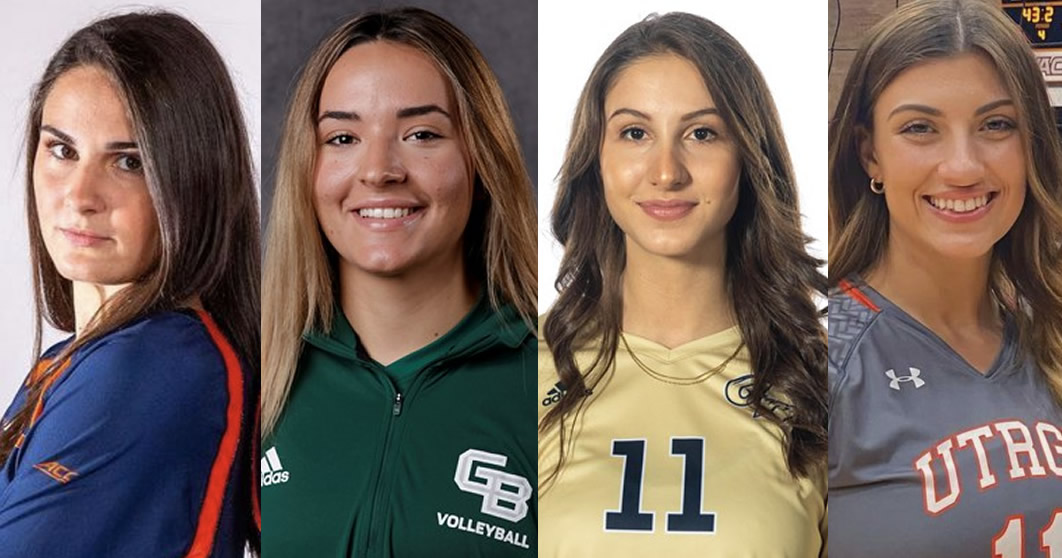 In the first place of the WAC conference is Charitonidi’s UTRGV with an overall 12-6 record! More double-doubles from Charitonidi, Karakasi and Hounta! With a 62.5% hitting percentage, Lanara helped her team get the ‘dub’ against George Mason with no hitting errors!

Ioanna Charitonidi
Charitonidi’s UTRGV (12-6, 4-1) is standing at the top of the WAC conference after their win against Sam Houston (3-2) this past Saturday. Good performance by Charitonidi who added another double-double for the season with 10 kills, 1 assist, 1 ace, 1 block and 12 digs.

Elena Karakasi
Syracuse bounced back this week with two wins and Karakasi was the protagonist for the ‘Cuse Orange (14-6, 3-5). The first win of the week was recorded against NC State University (3-1). The Greek setter had once again a double-double with 40 assists, 11 digs, 3 block assists, 1 ace, and 3 kills. The second match of the week ended in favor of Karakasi’s Syracuse with a sweep against UNC-Chapel Hill. Elena had another solid performance, with 32 assists, 4 block assists, 7 digs and 4 kills with 40% hitting percentage.

Iro Hounta
Iro Hounta led the Green Bay Phoenix to two wins last week. The University of Wisconsin Green Bay (14-6,5-4) defeated Youngstown State on October 14th with a 3-0 win. The Greek outside hitter played a major role in offense and defense for her team. She had 7 kills with 46.2% hitting percentage, 3 block assists, and 11 digs. On October 15th the Phoenix played against Robert Morris University and recorded a 3-0 win. Iro Hounta was the most productive player for the UWGB, with a 45.5 hitting percentage. The Greek player had the best performance for her season so far, with a double-double of 11 kills, 1 assist, 2 block assists, and 12 digs.

Markella Lanara
Really good performances by Lanara, one win and one loss for George Washington (2-17, 2-6) against George Mason within the A-10 conference. The Greek middle blocker had 9 kills, 3 aces, 9 blocks and 2 digs overall in both matches. During the win against George Mason, Lanara recorded an amazing 62.5% hitting percentage with no hitting errors.

Georgia Tselepi & Olga Zampati
One win and one loss for Tselepi and Zampati’s Quinnipiac University (6-14, 5-6) to continue their competition within the MAAC conference against Manhattan (3-0) and Iona(0-3). In the match against Manhattan, Tselepi had 8 kills, 2 assists, 3 blocks and 3 digs, while Zampati had 3 kills and 7 digs. During the match against Iona, Zampati had 5 kills, 2 assists and 5 digs.

Ariadni Kathariou
With the adrenaline rushing red, and with the games being so close on the scoreboard, the Greek middle blocker  of the "Red Storm '' (sitting at 27th place nationally for total blocks) and her team failed to beat Marquette University (16-3, 7-1), on Friday 15/10 losing in 3. Kathariou had 4 kills. The next day, they faced DePaul University (12-8, 5-3) in a great battle with a final score of 3-2 (15-12!). Ariadni helped her team with 8 kills and 8 blocks despite the result.

Next obligations:
23/10 VS Xavier University

Zoi Faki
On Thursday 14/10 the girls of San Diego State University started with a 3-0 victory against Boise State. Faki was a great leader in the back zone since she recorded 10 digs! On Saturday 16/10 ,and despite the 3-0 defeat against Utah State University, Faki had 4 kills, 2 aces, 1 block, and 11 digs.

Next obligations:
21/10 VS Colorado State

Ioanna Georgatzi
Georgatzi’s Azusa Pacific (13-4,8-1) had a winning week. The Cougars  defeated Point Loma University on October 15th with a clear 3-0 win. Georgatzi, with a positive impact in her team’s win, had 6 kills and 1 dig.

Katerina Papazoglou
The Temple Owls (5-14,1-7) recorded an important win against the University of Southern Florida in a 5-set thriller match. The Greek outside hitter had a good performance and helped her team to record a win against USF. More specifically, Papazoglou had 5 kills with a 40% hitting percentage, 1 ace, 1 block, and 10 digs. The second match of the week against UCF ended in favor of the Central Florida Knights. Katerina Papazoglou had a phenomenal impact on defense for the Temple Owls after recording 17 digs accompanied by 3 kills and 1 assist.

Marialena Mpampiri
Last week, Lyon College played against Blue Mountain College and the College of Ozarks. Both matches did not end in favor of the Lady Lyons. Despite the negative results, the Greek middle blocker had a great performance against the College of Ozarks. She recorded 13 kills, with a 39.3% hitting percentage, 2 aces, 2 blocks, and 8 digs. In the match against Blue Mountain College, Mpampiri had 2 kills and 2 digs.

Darina Kumanova
Despite Darina Kumanova’s solid performance, the University of the Pacific Tigers (7-12, 3-5) got defeated in 3 by Saint Mary’s College. The Bulgarian outside hitter was terminating every ball for the TIgers after and put down 12 balls. She also added 5 digs to her individual stats.