Big upset for the Red Storm girls of St. Johns! Tontai with hit percentage through the roof! Christodoulou is literally killing it! 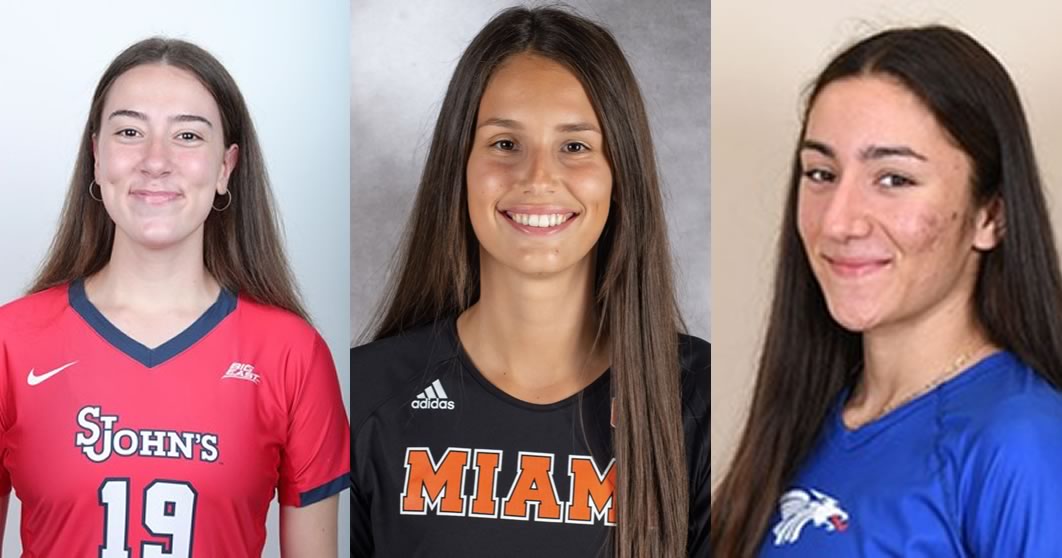 No. 16 Creighton was unable to weather the Red Storm! Alexakou and Kathariou’s team defeated the Bluejays in 4 sets. Amazing 0.923 hitting percentage for Tontai that led her Miami Hurricanes to the win with 12 kills! Outstanding performances from young Melina from Chalkida, having a new career high of 12 kills!

Ariadni Kathariou
The weekend could not have started better for the "Red Storm" (11-7, 2-2) of the Big East conference who defeated N. 16 Creighton University (15-2, 3-1) with a score of 3-1 and the good performances continued for Kathariou recording 8 kills and 7 blocks! Despite their defeat the next day against Providence College (13-4, 1-3), with a score of 3-1, Ariadni had 7 kills and 3 blocks. Ariadni currently sits at #10 in blocks in the entire NCAA D1!

Next obligations
8/10 VS Butler University 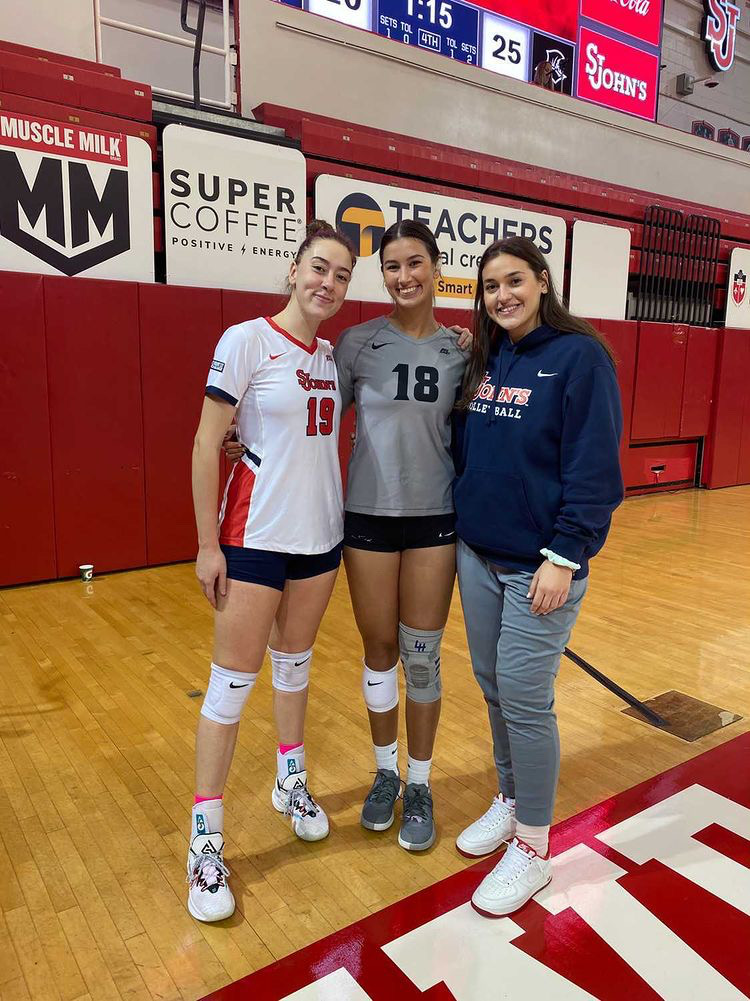 Aristea Tontai
October started well for the University of Miami Canes (12-2, 3-1). Tontai’s school defeated Notre Dame (3-0). The Greek middle blocker had 4 kills and 2 block assists. In the second match of the week, the Canes played against the University of North Carolina, Aristea’s former team, whence she graduated and currently continues on as a graduate student at Miami, and won in a five-set thriller match in which Aristea had 7 kills, 1 assist, and 1 block assist. On October 3rd, Miami recorded a win against NC State (3-0). Tontai had a phenomenal career-high with 12 kills out of 13 total attempts. Her hitting percentage was .923! She also had 6 block assists in the same match.

Melina Christodoulou
Back to the winning side for Melina Christodoulou’s Hutchinson CC, with the outside hitter of Chalkida literally killing it and leading her team to two victories. A great 5 set win against Cloud County after being down 0-2 with Melina recording 12 points (11 kills and 1 block). In the match that followed against Highland CC - Kansas, Christodoulou with an acquired speed, led to the victory (3-1) with a new career-high of 12 kills and 3 blocks!

Elena Karakasi
Last week, the Syracuse Orange (14-2, 3-1) recorded their 14th win. Elena Karakasi is unstoppable: she can hit, she can dig and she can set! In the match against Wake Forest, the Greek setter recorded another double-double with 3 kills, 38 assists, 2 aces, 2 block assists and 10 digs. The match ended in favor of the Orange (3-1). In their fourth match for the ACC, Karakasi’s Syracuse defeated Virginia Tech, in a 3-0 clear win. The Greek player had 17 assists and 4 digs.

Efrosini Bakodimou
Towson University (15-2, 3-2) started this week’s obligations with a 3-1 loss to Elon University (10-6, 5-1) on Saturday 2/10 for the CAA conference. The Greek outside hitter helped her team by recording 8 kills, 1 block, 4 aces and 3 digs. But on October 3rd, Towson found its way back and defeated Elon University with a score of 3-1 for the second consecutive match against these two teams! Fay had 9 kills, 4 aces and 4 digs.

Next obligations
9/10 VS College of Charleston

Chrysanthi Stamatiou
First ASUN win for Stamatiou’s Bellarmine (5-11, 1-4) against North Alabama(3-2). For the second match of the weekend Bellarmine recorded a loss against Jacksonville State(0-3). The Greek player saw action in both matches mainly in the back row. More specifically, Stamatiou had 5 kills, 2 assists, 2 aces and 10 digs overall.

Ioanna Charitonidi
First win for Charitonidi’s UTRGV within the WAC conference against Lamar (3-0) this past weekend of competition. The Greek player had 3 kills, 1 assist, 1 ace and 3 digs. With this win, UTRGV improves to a 9-6 record overall (1-1 WAC conference).

Elena Giourda
Giourda’s team did not manage to get a win against Ave Maria University(1-3). Giourda recorded 6 kills and 5 digs. Despite that loss, Coastal Georgia maintains a strong record of 16-2 (3-2 SUN conference)

Elena Baka
Baka’s St Mary’s College continued its obligations within the WCC conference with one win and one loss against Portland(3-2) and Gonzaga(1-3). St Mary's College has now an 8-6 overall record (2-3 WCC conference). Baka saw action in the match against Gonzaga and recorded 6 kills, 1 ace, 2 blocks and 9 digs.

Georgia Tselepi & Olga Zampati
Tselepi and Zampati’s Quinnipiac University (3-12, 2-4) continued its MAAC conference obligations with two away matches, recording two losses against Marist (1-3) and Fairfield (0-3). Tselepi had 11 kills, 1 assist, 1 block and 3 digs, while Zampati had 7 kills, 2 blocks and 15 digs in both matches overall.

Marialena Mpampiri
October did not start off the right way for Marialena’s Lyon College and continues its regular season with a 9-9 overall record and a 0-2 conference record. The Greek middle blocker helped her team this week, but unfortunately, the Lady Lyons were defeated by William Woods University (3-0). The Greek player had 3 kills and 4 block assists. The match against Cumberlands University got canceled.

Nafsika Papavasileiou
The University of Mount Olive Trojans (5-9,0-3) were defeated by Converse College (3-1) in their only match of the week. The Greek outside hitter helped her team with 1 kill and 3 digs.

Stefania Anagnostou
The Greek outside hitter Stefania Anagnostou helped the IUP Crimson Hawks (10-9,1-3) have a winning week. Anagnostou’s team recorded wins against Salem University and Mercyhurst University with 3-0 and 3-2 respectively. In the second match of the week, IUP played against Edinboro and got defeated in three straight sets. It is notable to mention that in this match Anagnostou had a phenomenal hitting percentage of 0.750 and also recorded 7 kills and 8 digs for the Crimson Hawks.

Iro Chounta & Zoi Sherolli
With two 3-0 losses, Chounta’s and Sherolli’s Wisconsin University Green Bay continued their obligations last week. In the match against UIC, Chounta had 4 kills, 7 digs, and 1 block assist. In the last match of the week, against Wright State, Zoi Sherolli and Iro Chounta really helped the Phoenix on defense. Chounta had 3 digs and Sherolli had 6. The game ended in favor of Wright State University (3-0)

Darina Kumanova
What an impressive week for the University of the Pacific (6-10, 3-2) and Darina Kumanova with her great performances leading her team in three straight wins. The first win for the Pacific Tigers was recorded against USF with the Bulgarian outside hitter having a tremendous impact on her team with 8 kills, 2 aces, 2 block assists, and 11 digs. On September 30th, Kumanova’s school defeated Portland. Darina helped her team and recorded 1 kill, 4 assists, 1 ace, and 2 digs. In the last match of the week, the University of the Pacific defeated (3-1) Gonzaga. Kumanova had 9 kills, 3 aces, 1 assist, 1 block assist, and 1 dig.