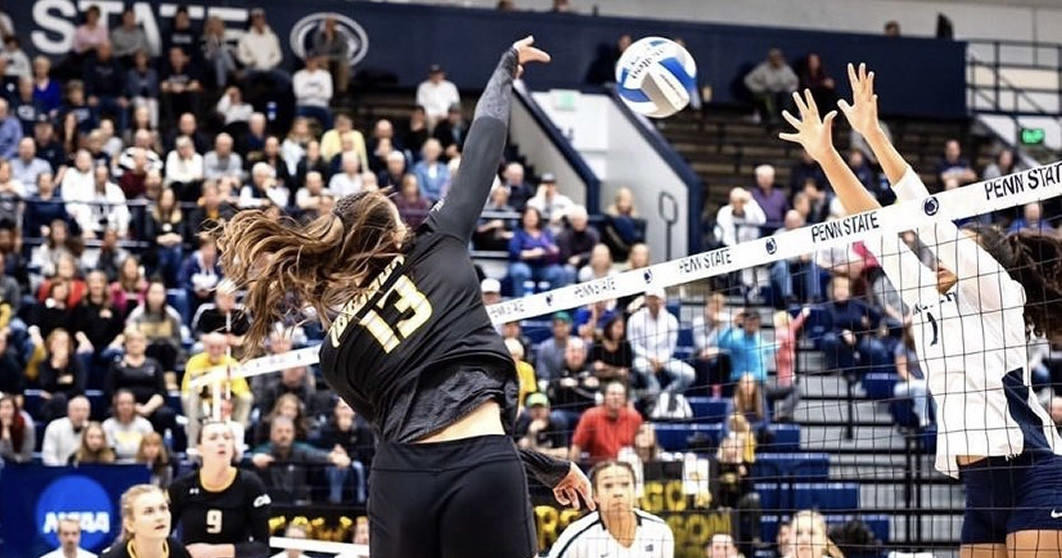 Also Darina Kumanova had 10 kills and 12 digs in the win against CSUN. Chounta, Charitonidi and Papageorgiou won’t let the ball touch the floor, recording 14,12 and 17 digs respectively in only one match! Another Greek civil war occured, this time between Papazoglou’s Temple and Bakodimou’s Towson.

With the Greek outside hitter on fire, the 3-0 victories continue for Towson University! On Friday 10/9 and with a 3-0 victory against Lehigh University, Bakodimou scored  11 kills, 1 block, 6 digs and 2 aces! On Saturday 11/9 Towson played and won 3-0 against Temple University with Fay the main character in this battle with 13 kills, 1 ace, 2 blocks and 5 digs!

Undefeated this week were the Greek girls of the Red Storm with double-doubles and very good performances! In detail, on Tuesday 7/9, Alexakou made another double-double with 19 kills and 12 digs! However, Kathariou’s role was also important with 2 kills and 4 blocks! On the following Friday, the Red Storm hosted and won for the 5th consecutive time the Jack Kaiser annual Tournament with the two Greeks in very good shape! On Friday against Fordham and a 3-2 victory, Alexakou had another double-double with 12 kills and 12 digs as well as 3 blocks. Also Kathariou’s appearance was very good with 10 kills and 5 blocks! On the same day, in another 3-2 victory against Boston College, Alexakou did not play and Kathariou scored 2 kills and 3 blocks. At the end of this week and with a 3-0 victory against the Army, Alexakou scored 10 kills and 6 digs and Kathariou had 6 kills and 4 blocks.

Elena Karakasi
Syracuse University is unstoppable and Elena Karakasi is on fire, with two double-doubles this week. Syracuse University recorded two impressive wins over the week, one against the University of Iowa (Big ten) and another one against Ball State University. The third Game of the week against Iowa State ended in favour of the Iowa Cyclones. In the first game of the week the Cuse Oranges defeated the University of Iowa (3-1) which is a member of the Big ten Conference. Karakasi was the leader in assists for the ninth match in a row, 26 assists, 2 aces, 9 digs. In the game against Iowa State the oranges fought but the 5 set thriller ended in favor of the Cyclones. Karakasi had a phenomenal performance and made her second double-double for the season with 46 assists and 10 digs. The last game of the week against Ball state ended in favour of the Oranges with a 3-0 win. The Greek setter was impressive and recorded her third double-double for the season: 44 assists, 10 digs and 1 kill.

Katerina Papazoglou
Katerina Papazoglou is thriving for the third week in a row. Papazoglou has been a phenomenal scorer for the Temple owls and she recorded her second double-double for the season this week against Norfolk State. Even though the game did not end in favor of the Owls (1-3 loss), the Greek outside hitter recorded 10 kills, 2 aces and 13 digs. The second game of the week was a Greek civil war between Papazoglou’s Temple against Fay Bakodimou’s and Tatiana Armoutsi’s Towson. Fay Bakodimou and Katerina Papazoglou are coming from different cities but they played together for the youth national team of Greece prior to their collegiate career in the United States. Papazoglou helped her team and recorded 4 kills, 1 ace and 5 digs. Bakodimou was the top scorer for the Tigers in the game and recorded 13 kills and 5 digs.

Marianna Anastasiadi and Oakland City University recorded a win against Berea College (3-2) on September 7th, with Anastasiadi’s good performance leading to her team’s victory. The Greek player helped her team by competing in all 5 sets, with 14 digs and 23 assists.

For their third weekend of competition, Charitonidi’s UTRGV recorded three wins against Louisiana (3-2), Incarnate Word (3-0) and Texas Southern (3-0) and only one loss against Texas A&M-Corpus Christi (1-3) out of the four games they played at the UTRGV Tournament. The Greek outside hitter competed in all four matches, putting up some really good numbers. In the first two games against Louisiana and Incarnate Word, she had 7 kills, 1 ace, 1 block and 19 digs, respectively. During their game against Texas Southern, Charitonidi had 9 kills and 10 digs, while at their last game against Texas A&M-Corpus Christi, the Greek player had 6 kills in the two firsts sets. Later on, during the two last sets of the match, she stepped up into the libero position, adding 12 digs and 1 ace.

The good performances continue for the Greek middle blockers! On Wednesday 8/9 Providence College went face to face for a 3-0 victory against Merrimack College with the Greek blocker being in very good shape with 3 kills and 2 blocks. On Friday, the Friars hosted the Annual Friar Volleyball Classic with a 3-0 victory over Saint Peter’s University with Elena being on fire once again! Leontaridou recorded 9 kills and 2 blocks. On Saturday 11/9 Providence College defeated Binghamton University 3-1 and won 3-0 against Fairleigh Dickinson University.

Mpampiri’s Lyon college had 2 phenomenal wins this week. Lyons had an impressive upset win, 3-2 over the College of Ozarks. The Greek middle had a fantastic game and helped her team to defeat Ozarks, which they have lost from last week. Mpampiri had 5 kills, 1 ace, 6 blocks, and 4 digs. In the second game of the week, the Lyon ladies played against Crowley’s Ridge College. The game ended in favor of the Lyons and the Greek middle had a second great game in the same week: she had 5 kills, 1 assist, 1 ace, 3 digs.

What a phenomenal week for the Azusa Pacific Cougars with four wins. Georgatzi’s school firstly defeated Northwest Nazarene in 3 straight sets. The second win of the week came when the Cougars defeated Stanislaus State University with an impressive 3-0 as well. Georgatzi helped her team to defeat their opponents and she had 6 kills and 2 digs. The third and the fourth win of the week came when Georgatzi’s school defeated the University of California San Marcos and Westminster University both with 3-1. The Greek outside hitter helped her team with her participation in the majority of the sets. She recorded 6 kills and 1 dig for the Cougars.

For the third week in a row, the University of Mount Olive Trojans recorded a winning record. The first win for the Trojans came when they played against Catawba College and recorded a phenomenal win after a 5 set thriller game. The second win of the week was reported against Shaw University which the Trojans won 3-1. Finally, the week ended in the greatest way possible for Papavasileiou’s school after they had a 5-0 win over the Pitt community college exhibition game. The Greek player helped her team to record three straight wins as she participated in the majority of the sets. Papavasileiou recorded 9 kills, 10 digs, 3 aces, 1 block, and 2 assists.

Darina Kumanova
Darina Kumanova had an impressive double-double and led the Pacific Tigers in their only win over CSUN. The first two matches of the week did not end in favor of the University of the Pacific. Darina Kumanova, helped her team against their battle with Boise State (0-3 loss) and had 8 kills, 6 digs, 1 ace, 1 block. In the second game of the week, the Pacific got defeated by Sacramento State in a five set thriller. Kumanova was a phenomenal hitter for the Tigers recording 9 kills, but she also played a major role in defence when she recorded 12 digs accompanied with 1 ace. In the third game of the week, Kumanova’s school defeated CSUN with a 3-1 win. The Bulgarian outside had an outstanding performance and she made a double-double recording 10 kills and 12 digs.

Giourda’s College of Coastal Georgia improves to a 12-0 winning streak by recording three wins against St. Andrew University (3-1), Savannah State University (3-0) and Wesleyan College (3-0) on this past weekend of competition. The Greek player saw action in all three games with good performances offensively and from the service line, which helped lead to the three victories. More specifically, on September 8th against St. Andrew University, Giourda had 7 points in total, with 4 kills, 3 aces and 1 dig, while on September 11th against Savannah State and Wesleyan College University, she recorded 7 kills, 2 aces and 2 digs.

One more weekend of incredible performances for Baka: one win against CSU Bakersfield (3-1) and one loss against Utah State (1-3) for St. Mary’s College . On September 10th, the talented outside hitter from Thessaloniki recorded 12 kills, 3 aces and 7 digs against CSU Bakersfield. On September 11th against Utah State, Baka had an even better performance with 16 kills, 4 assists, 1 ace and 8 digs, respectively.