Lucky 17 for Baka! Tselepi’s first double-double! Karakasi has a solution for everything! Kumanova: she can serve, she can hit, she can dig! 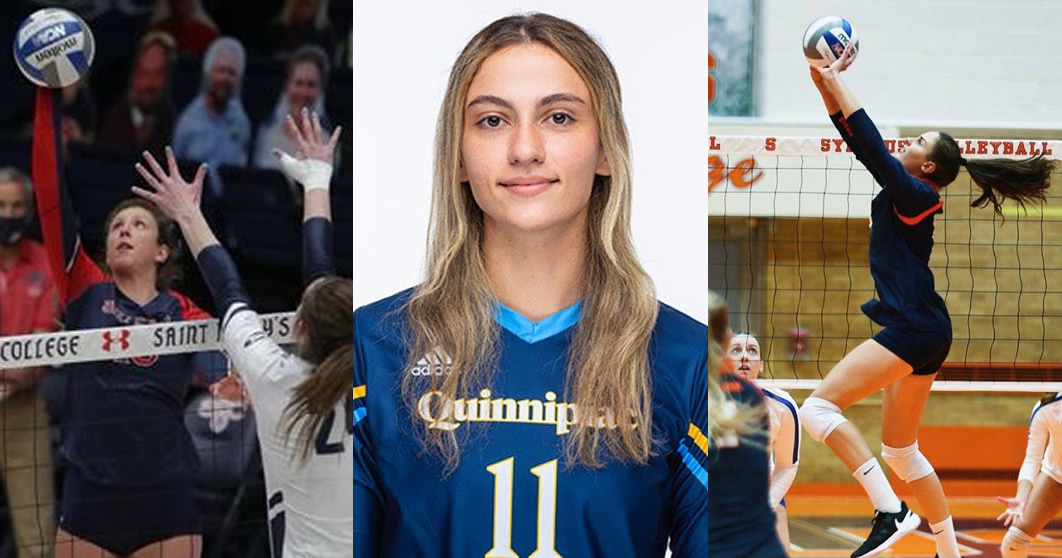 The double-doubles are unstoppable for the Greeks who excel in the American arenas! Elena Baka added another double-double to her resume, the lucky 17, after her excellent performance against San Jose State with 17 kills and 17 digs. Georgia Tselepi had her first double-double of her American career on September 3rd against Hartford with 13 kills and 17 digs! Senior Elena Karakasi keeps having remarkable performances, contributing significantly to Syracuse’s 6 winning streak! Kumanova basically does it all! The Bulgarian outside hitter had three outstanding performances and collected 31 kills, 10 aces and 22 digs in only 11 sets!

Elena Karakasi
Syracuse University had a very impressive week, winning three out of three games. The Greek setter is leading her school in assists for the second week in a row. Syracuse achieved the first win of the week against Zampati’s and Tselepi’s Quinnipiac (3-0), Elena Karakasi had  36 assists, 2 kills followed by 3 digs. The second win of the week came after the Syracuse Orange recorded a 3-0 win against Yale. The Greek player had a phenomenal game with a double-double. Karakasi recorded 33 assists, 12 digs, 3 kills, 1 block. The final win for the Orange was against Hartford (3-0) the setter recorded 22 assists, 3 kills, and 6 digs.

Elena Baka
Another double-double for Baka! The Greek player from St. Mary’s College had one loss and one win on the second weekend for this season. On September 3rd against San Jose State, Baka’s team lost, despite the Greek player’s  incredible performance with 17 kills and 17 digs. On September 4th against Sacramento State, Baka had 8 kills, 1 ace and 9 digs leading her team to the victory.

Olga Zampati/Georgia Tselepi
Zampati and Tselepi’s Quinnipiac University faced strong opponents for their second weekend of competition, recording three losses against Syracuse, Hartford and Yale. On September 3rd against Syracuse, Tselepi had 4 kills, 1 ace and 2 digs. Later that same day against Hartford, Tselepi had a great performance, recording her first double-double of the year with 13 kills and 17 digs, while Zampati had 6 kills, 1 ace and 3 digs at the same match.

Darina Kumanova
Great week for the Pacific Tigers, Darina was on fire for the second week in a row. Kumanova’s school recorded two wins and one loss the past week. The outside hitter helped her team have a winning week. In the first game against Tarleton, Kumanova had 8 kills, 2 aces, 2 blocks, and 4 digs and led her team in a 3-0  win. In the second game of the week, the Pacific Tigers recorded a clear 3-0 win against UC San Diego. Once again, Kumanova had an impressive game: she scored 13 points, 8 kills, 5 aces, and 12 digs. In the third game of the week, the hitter had a phenomenal game for the Tigers although Pacific fell 3-2 to the University of California Berkeley, in the last game of the week. Darina scored 18 points, with 15 kills, 6 digs, 3 aces.

Next obligations:
6/9 vs Butler Community College

Zoe Faki
Besides the negative result that this weekend brought to San Diego State University due to their loss to Pepperdine and Kansas State, the Greek outside hitter once more had very impressive stats and led her team to a straight 3-0 win against UC Santa Barbara University. The Greek outside hitter  scored 12 kills, 1 block and 9 digs and led her team to the win. The next day the Aztecs lost 3-1 against Pepperdine University and Kansas State. Zoi Faki had double digits in attack for the second straight game of the week with 13 kills, 2 aces and 7 digs against Kansas State, and 5 kills, 7 digs, and 2 blocks against Pepperdine.

Efrosini Alexakou - Ariadni Kathariou
“Red storm's“ first win was earned by the two Greek players on Friday morning against Albany with a 3-1 win. The Greek outside hitter played in the back row and had 8 digs. Kathariou had 5 kills and 6 blocks. On the same day, they faced Cornell where Alexakou had 10 digs and Kathariou had 4 kills and 8 blocks. At the end of this tournament, St. John's University won 3-1 against Colgate University and Efrosini had 16 kills, 15 digs, 1 ace and 1 block. The Greek middle blocker had 6 kills and 3 blocks.

Next obligations:
7/9 vs LIU

Mpampiri’s Lyon College had 2 impressive wins this week. The Lyons recorded 3-0 wins against Jarvis Christian  and Centenary College. Mpampiri helped her team reach positive results: she had 8 kills, 1 assist, 6 digs, and 2 aces. Even with Mpampiri’s strong performance her school was defeated by Bethel, MACU, and the College of Ozarks. In those games, the Greek middle blocker scored 15 kills, 3 aces, and 3 digs for the Lyons.

Azusa Pacific recorded a win this week. Georgatzi’s Pacific played against California State Los Angeles and the game ended 3-2 for the Azusa Pacific Cougars. The Greek outside hitter helped her team reach the positive results in the five set thriller. Despite the good performance of the Greek athlete, Azusa Pacific got defeated by Simon Fraser, Regis University, and California State San Bernardino. The Greek hitter recorded 5 kills and 2 digs.

Iro Chounta- Zoi Sherolli
University of Wisconsin Green Bay had a positive week after recording two wins. In the games that  ended in favor of the Phoenix, the Greek players helped their school to achieve clear 3-0 wins against Texas Southern University and ACU. Iro Chounta had 9 digs, 1 assist, and 1 ace. Zoi Sherolli had impressive serve runs with 6 aces and 7 digs. Despite the good performances of the Greek student-athletes the Phoenix was defeated by the University of New Mexico. Iro Chounta scored 6 points, coming from 5 kills and 1 ace accompanied by 7 digs. Zoi Sherolli recorded 1 dig in the same match.

Ilaria Benciolini made a strong debut as a freshman. For the first time in her career the Italian middle blocker helped Rochester University to have an impressive 4-1 season opening. Benciolini appeared in the three out of four winning games against  Elmira College, Oneonta University, and Madaline College Her performances helped her team to achieve clear 3-0 wins . Benciolini scored 8 kills.

The University of Mount Olive Trojans secured the 2nd place in VSU’s tournament over the weekend. The UMO Trojans started their season strong with 2 clear 3-0 wins against Salem University and Virginia State University, and a 3-2 loss against Georgian Court University. The Greek outside hitter had 4 kills and 3 digs.

Areti Tsirikaki had a strong start in her collegiate career debut; she  helped the University of Rochester in their two clean 3-0 wins against Oneonta University, and Madaline College. Despite Tsirikaki’s great performance, Rochester fell on a 2-3 thriller loss to Smith College. The Greek Player had decent performances with  10 kills, 13 digs, and 1 ace.

Next obligations:
10/9 VS  LEHIGH UNIVERSITY

Next obligations:
8/9 VS Merrimack College.

The freshman from the University of South Alabama, Irini Glinou, had her debut in her collegiate career. The Alabama Jaguars faced UNC Asheville on 3/9 and recorded a 3-0 victory. The native from Athens helped her team and  scored 3 kills, 1 ace, 2 blocks and 3 digs. The next day Glinou’s team was defeated by Valparaiso University. The outside hitter saw a little bit of action in this second game.

Ioanna Charitonidi
Charitonidi’s UTRGV recorded three losses this past weekend at the Cowtown Classic tournament, against UMBC, TCU and Nicholls. The Greek player participated in all three games. On September 2nd against UMBC she had 9 kills, 2 aces and 12 digs, while later that day against TCU, she recorded 3 kills and 2 digs. On September 3rd against Nicholls, Charitonidi had 2 kills, 9 digs and very good passing stats.

Elisavet Papageorgiou
Eastern Illinois and Papageorgiou notched one loss and one win this past weekend of competition. The Greek player saw action mostly in the back row, recording 5 digs.