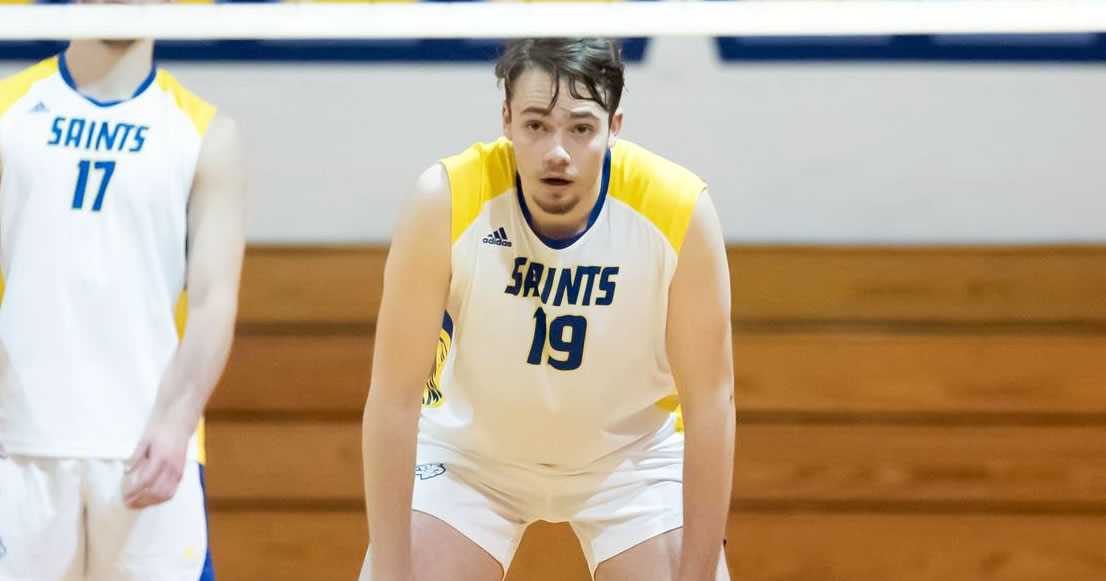 An amazing performance by Christos Gitersos after breaking last year’s personal record of 46 assists, having 51 against Queens University of Charlotte, also scoring his first double-double of the year with 51 assists and 10 digs. Giourda’s University of Central Florida ranks 1st place with 5 wins while Papazoglou’s Temple University ranks 2nd, neither of which have suffered any defeats.

Next Obligations:
February 10th vs. Barton
February 13th vs. Erskine

Efrosini Alexakou, Ariadni Kathariou
A great season opener in the Big East conference for St. Johns University (3-1) against Fordham.  Alexakou, validating last year’s title of the Big East’s best player, led her team and scored 18.5 points, out of which 16 were kills, 11 digs, 3 blocks, and 1 ace, while the middle blocker, Kathariou, scored 5 kills. Unfortunately, in their second match in the Spring 2021 season, St Johns fell to Katerina Papazoglou’s Temple. Alexakou led her team once again with 14 points, 13 kills, 2 blocks, 2 digs, while Kathariou played in the 3rd set and scored 1 kill and 2 blocks.

Elena Baka
Baka’s St. Mary’s College failed to break Pepperdine’s streak of wins and suffered a 3-0 and 3-1 defeat. Nevertheless, the Greek outside hitter had a leading presence in both games scoring 13.5 and 13 points respectively, with 24 kills, 1 block, 2 aces, 22 digs, and 3 assists.

Next obligations:
February 7th and 8th vs. San Diego

Ioanna Charitonidi
UTRGV dropped their WAC opener at Dixie State with 3-0 both games. Charitonidi played as a libero for the first game and an outside hitter in the second game. Charitonidi had good serve-receive percentage reaching 85% in both games, 10 digs, 4 kills, 1 block, and 1 assist.

Next obligations:
February 8th and 9th vs. New Mexico State

Chrysanthi Stamatiou
Stamatiou’s Bellarmine University wrapped up the week with 3 defeats against Butler University (2-3) and Kennesaw State University (2-3, 0-3). Despite the unpleasant results, the outside hitter grad-student scored 25 kills, 27 digs, and 2 blocks.

Next obligations:
February 12th and 13th vs. Lipscomb University

Zoe Seroli, Iro Hounta
Seroli’s and Hounta’s Green Bay swept IUPUI twice this week. Hounta played in one game scoring 10 kills, 3 aces, and 6 digs while Seroli played in the second game and did not score any points.

Next obligations:
February 8th and 9th vs. Milwaukee

Stella Antypa
Rutgers’ faced two very difficult games this week with the mighty Wisconsin (ranked No.1 in the U.S. as voted by the AVCA). Antypa’s university did not manage to overthrow Wisconsin and ended up losing both games 3-0. The Greek freshman participated in both games, contributing in the back zone.

Next obligations:
February 12th and 13th vs. Nebraska

Next obligations:
February 11th and 12th vs. East Carolina University

Dimitris Kiridis
Dimitris Kiridis’ Barton College won 3-1 against Emmanuel University. The senior middle blocker participated in all 4 sets and contributed to his team with 6 kills, 4 blocks, and 9 points. Their game against Erskine University has been postponed.

Next obligations:
February 10th vs. Limestone
February 12th vs. Lees-Mcrae

Next obligations:
February 12th and 13th vs. University of South Florida

Lida Kastanou
A great start to the month of February for both Lida Kastanou and Bradley University (1-1) with a 3-0 (27-25, 27-25, 25-23) victory over Illinois State University, climbing to the 7th spot at Missouri Valley Conference. The Greek right side did not participate.

Eva Athanasiadou
A tough start for Athanasiadou’s St Louis University after suffering 3 defeats by Western Kentucky (0-3), by Evansville (2-3) and by VCU (1-3). Their game against Davidson on February 6th has been postponed. The sophomore setter did not participate in these matches.

Next obligations:
February 9th vs. Butler
February 13th vs. Dayton

Markella Lanara
Lanara’s George Washington suffered two defeats this week against George Mason (0-3 & 2-3). The freshman middle blocker participated in all sets, and had significant contributions. She almost delivered a win in the last point in the tie break for her team on Sunday, but her attack was dug, and George Mason was able to turn it around and prevail by 14-16. In total, against George Mason Markella had 5 kills in 12 attacks, 1 ace, 2 digs, 4 key blocks, and 8.5 points.

Alexandra Drosopoulou
Two more victories for Drosopoulou’s UIC against Morris on February 1st and 2nd (3-1, 3-0). The Greek outside hitter did not participate in these 2 games.

Next obligations:
February 8th and 9th vs. Youngstown State