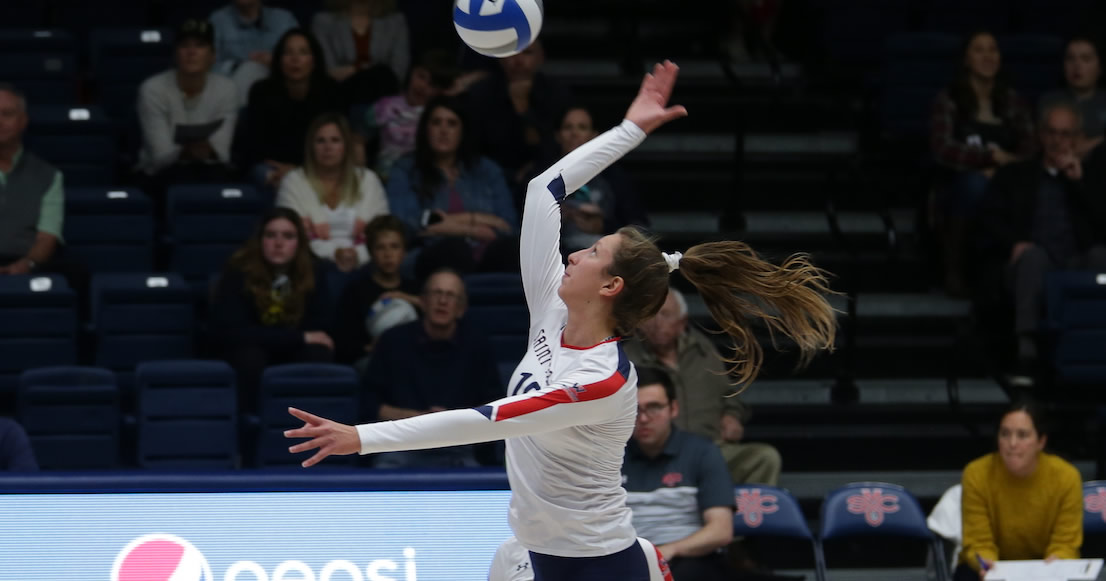 Elena Baka
Saint Mary’s College premiered in the WCC championship with one win and one defeat against Loyola Marymount University. Even though in the first game, the Greek outside-hitter scored 8 points, 7 kills, 7 digs, and 1 block, SMC dropped their season-opening to LMU in four sets. However, in their rematch SMC bounced back and defeated LMU in 5 sets. This was a historic win against LMU in Los Angeles, St. Mary’s first in almost a decade! Baka led her team and contributed to their victory with a personal best 19.5 points, 17 kills, 1 block, 2 aces, 1 assist, and 11 digs. It is important to mention that in the 5th set, with a score of 12-12, she carried her team on her back and scored the 13th point giving them a boost of confidence, closing the set with 17-15 and marking a great start for this year.

Next Obligations:
February 2nd and 3rd vs. Pepperdine University

Christos Gitersos
On January 30th Giterso’s Limestone University fell to North Greenville in four sets (3-1). The sophomore setter played in all 4 sets and had 2 kills, 34 assists (a season high record), 6 digs, and 3 blocks. Another match was scheduled against Erskine, which was canceled.

Next Obligations:
February 2nd vs. Emmanuel
February 4th vs. Queens

After adding another 4 victories to its list, Papazoglou’s Odessa College waves goodbye to the very successful month of January which consisted of 7 wins and 1 loss. Starting strong on January 28th, Odessa College won easily against Victoria College (3-0), with the freshman participating in all 3 sets and scoring 1 kill, 2 aces, and 1 block. On the 29th of January followed another easy victory (3-0) against Garden City Community College where Papazoglou scored 5 kills, 5 digs, and 1 single block in 2 sets. On the 29th of January against Trinity Valley Community College, Odessa College won once again (3-0), this time without the participation of the 22-year-old.

Iro Chounta- Zoe Seroli
The University of Wisconsin Green Bay (0-2) of Iro Chounta and Zoe Seroli did not have a good start to their season as they suffered a 0-3 and 1-3 defeat by Cleveland State. The Greek athletes scored in total for both games: 10 kills, 1 ace, and 5 digs by Chounta, and 1 block, 1 dig, and 1 kill by Seroli.

Next Obligations:
February 1st and 2nd vs. IUPUI

Chrysanthi Stamatiou
Unfortunately, Bellarmine University fell to Xavier University (3-1). Nevertheless, the presence of the Greek athlete who played in all 4 sets was very good, scoring 15 kills and 9 digs.

Dimitra Tziarli
Tziarli’s University of Cincinnati ends January with 1 win and 1 defeat against Illinois State University, with the Greek middle-blocker participating in both games. More specifically, on the 29th of January, Tziarli played in all 4 sets and scored 1 kill, 2 assists, 2 blocks, and 4 digs which resulted in a 3-1 victory for the Bearcats. On the 30th of January, she scored 1 kill, 1 block, and 4 digs in 3 sets.

Next Obligations:
February 5th and 6th vs. Xavier University

Next Obligations:
February 6th and 7th vs. George Mason

Stella Giourda
The University of Central Florida of the freshman, Stella Giourda, starts strong in 2021 with 3 victories. The UCF Knights secured 2 wins over Florida Atlantic University, in a scrimmage (4-0) and regular match (3-1). The 18-year-old took part in 3 sets total out of both games and scored 2 kills, 2 digs, and 1 block. Their scheduled game against Stetson on the 28th of January had to be canceled, while on the 30th of January, UCF won against the University of North Florida without the help of the freshman outside-hitter.

Next Obligations:
January 31st vs. UNF
February 5th and 6th vs Tulane

Next Obligations:
February 5th vs Erskine
February 6th vs Emmanuel

Stella Antypa
With one victory and one loss on the 29th and 30th of January against Indiana University, Rutgers University continues its obligations in the very strong Big 10 conference. The win against Indiana on January 29th was a historic and memorable one, as the first win against the Indiana Hoosiers in the history of Rutgers Volleyball, and the first home opener win in the Big 10 conference. Antypa contributed to her team from the back row where she scored 3 aces and made 7 digs in total.

Next Obligations:
February 5th and 6th vs. Wisconsin

Alexandra Drosopoulou
Drosopoulou’s University of Illinois Chicago began their season with two victories on the 25th and 26th of January against Purdue Fort Wayne University. The senior outside-hitter only took part in one set.

Next Obligations:
February 1st and 2nd vs. Robert Morris

Lida Kastanou
On the 25th of January Bradley University drops their season opening with a 0-3 defeat against Illinois State University. The 23-year-old right-side did not take part in this game.

Katerina Papazoglou
Papazoglou’s Temple University was finally able to host 1 of the 3 matches after their postponement due to Covid-19. Nevertheless, Temple University continues their amazing course with a total of 2 wins including the one over the University of Connecticut with 3-1 (17-25, 25-23, 26-24, 25-19). The 23-year-old did not play in this game.

Ioanna Charitonidi
The 2nd game for UTRGV did not take place as Chicago State University had to postpone its competitions from the WAC conference due to COVID-19.

Next Obligations:
February 1st and 2nd vs. Dixie State