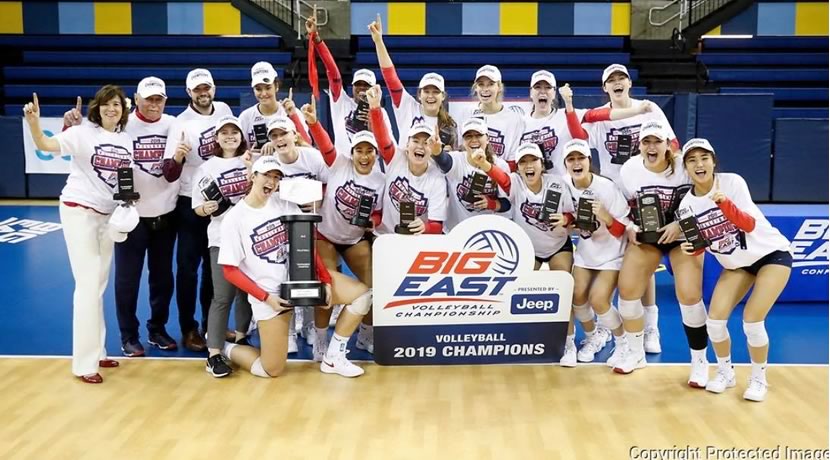 With 10/15 international student-athletes on its roster, and the mix of culture, talent, and feistiness for which NYC is world-renowned, St. John’s Volleyball completed what is currently the most stunning and remarkable upset of the 2019 college volleyball season, capturing the Big East tournament title.

After upsetting #10 nationally Creighton, veteran head coach (herself a true New Yorker in spirit, fight, and flair) Jojo Persico’s Johnnies did the unthinkable and prevailed over the Big East Tourney’s hosts Marquette Golden Eagles on their home court 3-1 (25-20, 25-22, 19-25, 25-21). It is important to note that other than a top-10 ranking this season, Marquette beat two top-10 opponents at BYU (#9) and at Wisconsin (#4). Marquette featured two All-Americans in Allie Barber (Big East Player of the Year, presumptive consensus All-American in 2019, All-American second team in 2018) and Martha Konovodoff. Marquette had only lost at home to #1 Baylor and #9 Creighton. 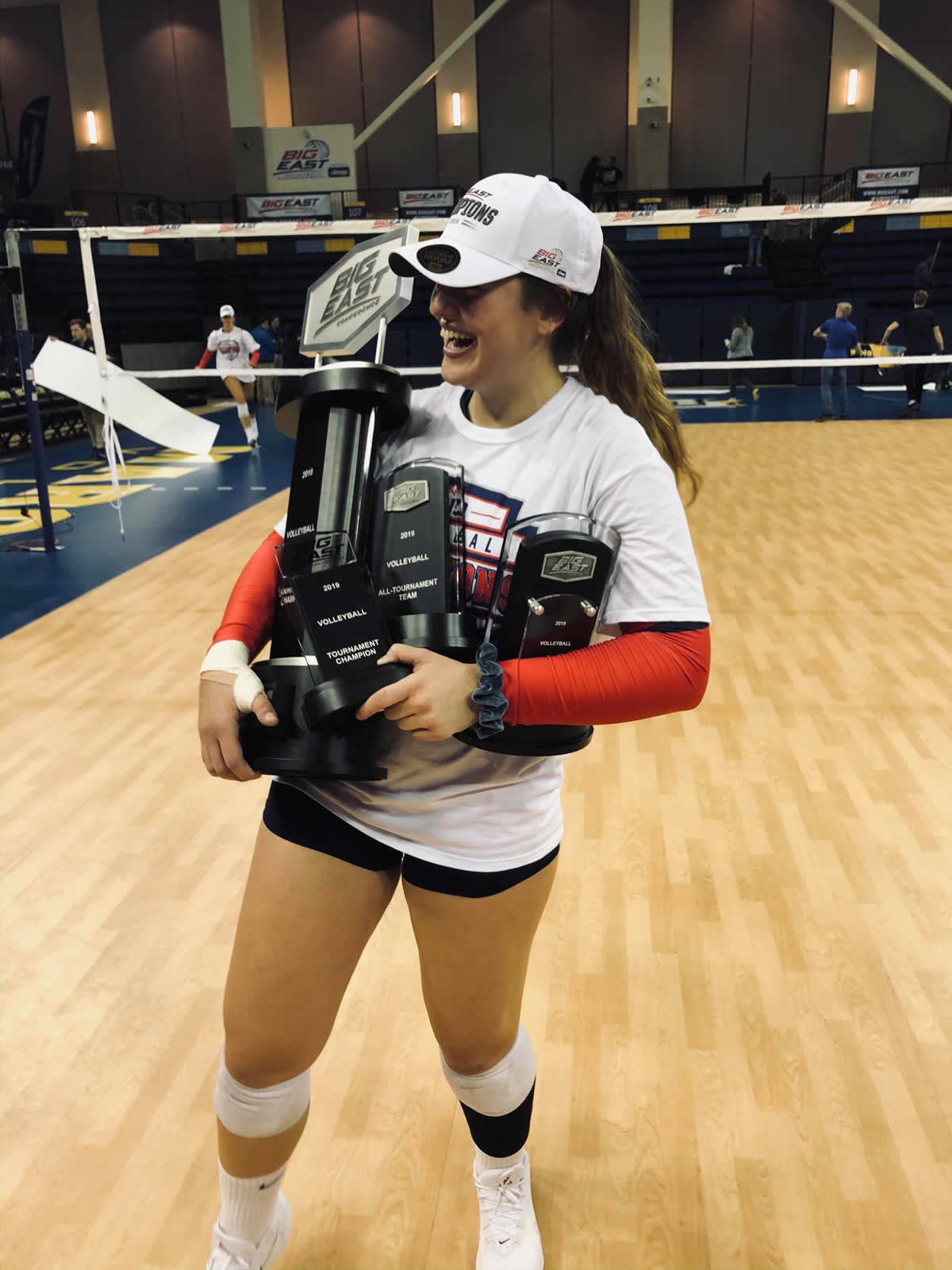 Efrosini Alexakou, the Big East tournament’s Most Outstanding Player, led the way with 19 kills in 51 total attacks, while fellow sophomore Rachele Rastelli pitched in 15 kills and together with graduating senior setter Erica Di Maulo were voted on the Big East All-Tournament Team, repeating their regular season honors. Critical were the contributions of Klara Mikelova (11 kills and 18 digs in the final match, and 20.5 points with 29 digs in the tournament overall) and Ariadni Kathariou (who led all players in blocks both in the semi-final and the final, with a total of 10 blocks and 13.5 points). Allie Barber had 23 kills in 45 total attacks, while Hope Werch had 17 kills and 13 digs for Marquette. 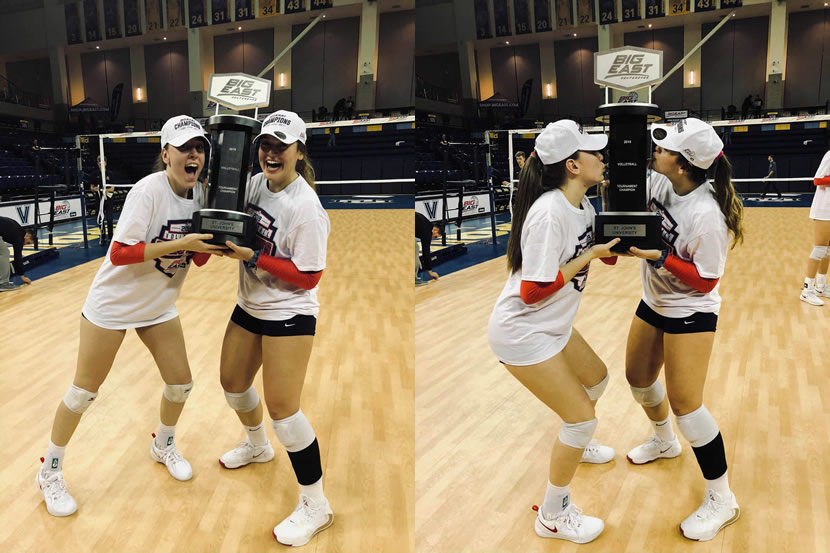 After thanking everyone from God to St. John’s administration to every single one of her players to their parents, alumnae, and doubters and supporters alike, Coach Persico said:
“We’re really excited because we were a big underdog… think we had great team chemistry over the last few weeks, which was really great. We've always had good team chemistry, but I thought in tough moments, we stayed composed. I told the team before that I usually bring a check-in bag, but I brought a big suitcase. I said, 'we have to bring something home,' so I'm really proud of this team and it will be a memorable day for us forever… We’re all just running on adrenaline here… I don’t know what day it is, I don’t know what time it is…”
Marquette head coach Ryan Theis said: “They played six really good sets throughout the course of this weekend… We only played four… I thought they defended pretty well for both matches in the tournament. They held Creighton under .100… The setter put Alexakou in good positions and I don’t think blocking is our strength anyway… We needed a new team to come out… I thought our crowd could get behind us if we didn’t start down 5-1. That’s what happened. Sure enough in game four, we started out a little bit slow. The crowd never gets into it. St. John’s is never feeling the pressure, and they’re able to hold the lead for the whole time…” 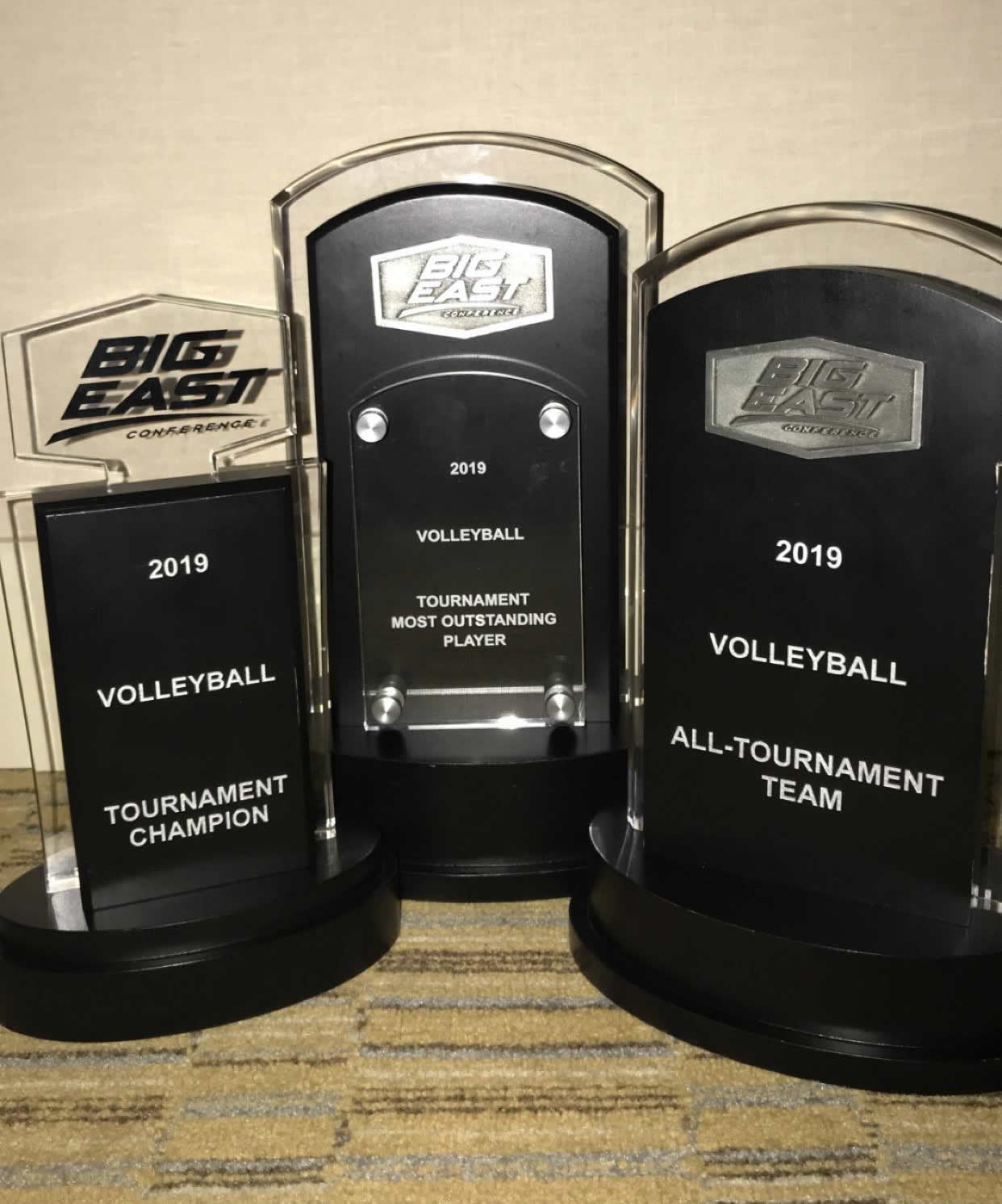 Coach Persico added that she’s always been appreciative of the support from international fans and the Nomos team since the early days of the European Volleyball Exposure (EVE) showcase, whence she recruited Alexakou and Kathariou. Looking forward to more life turns, truly valuable opportunities, and memorable moments for and with deserving student-athletes from all over the world. Thank you for the memories and inspiring others to follow your path Ari, Efro, and the rest of the United Nations of Volleyball!