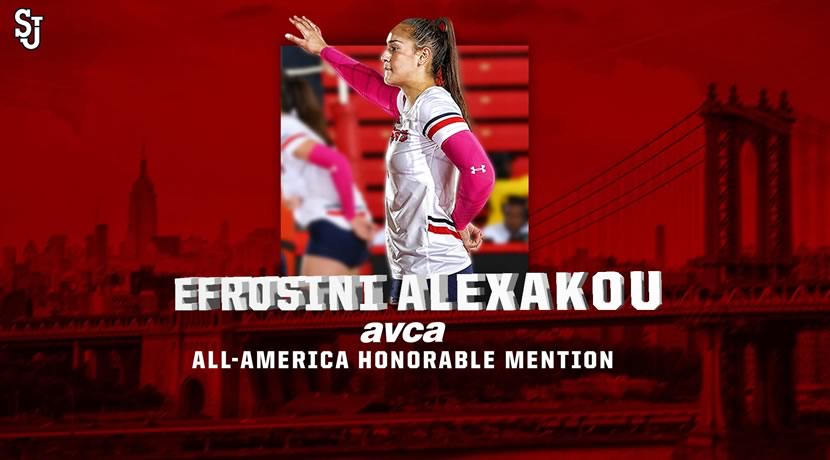 Specifically, Alexakou received the Freshman of the Year award from all Conferences on the East Coast, as well as the prestigious AVCA Honorable Mention All-America.  Five years have elapsed since the last time an athlete from St. John's University had this distinction, namely Karin Palgutova in 2013.

The 18-year-old outside hitter with 371 kills (3.67 per set) and 15 double-doubles in the season immediately became a permanent fixture in the starting line-up and irreplaceable for her team.

"Our goals are now bigger"

Alexakou’s exclusive interview for this distinction at the Nomos press office: "The truth is that this year was a very successful year for me. I came to a university that is not one of the strongest in the country. My goal was to go to a modest team so I can play from my first season, because here in America usually the freshmen do not play. I wanted to be able to help the university become more competitive and together reach higher goals. And to be exact, I came to America after the tournaments had begun."

For the beginning of her college volleyball career and the course of the season, she pointed out: "We had set some goals with the team from the beginning. It is very difficult to start something completely new with people you meet for the first time in your life. It's not like in Greece where we know all the players and you just try to fine-tune the roster and rotations. Here it all starts from the very beginning. I was in the starting line-up in my first match, without being fully ready. But I realized that the university trusted me even though I was unprepared. After a few weeks we started to become ... more of a team and this was confirmed, since after 7 years St. John's advanced to the finals of the Big East Conference, taking 3rd place in the standings. We won games that we were not expected to win. I also want to say that the university participated for the first time in its history in the NIVC post-season tournament."

In terms of goals, she stated: "My goals were successfully accomplished for my first season. I wanted to earn a starting position and help the university. Through group success one can always reach individual success as well. You cannot succeed if you do not help the team first. The team is the one to help you grow. I am very happy to have won some awards because this will help me in my later career. But these belong to the past. In the new season the team goals will be bigger, so the personal ones will be bigger as well.”