The Greek offensive of 2022 continues… Perfect 5 for 5! Mandilaris: The 1st double-double of ‘22 is a fact! New records: The sequel… Kalagasidis CalPac setter of the week! 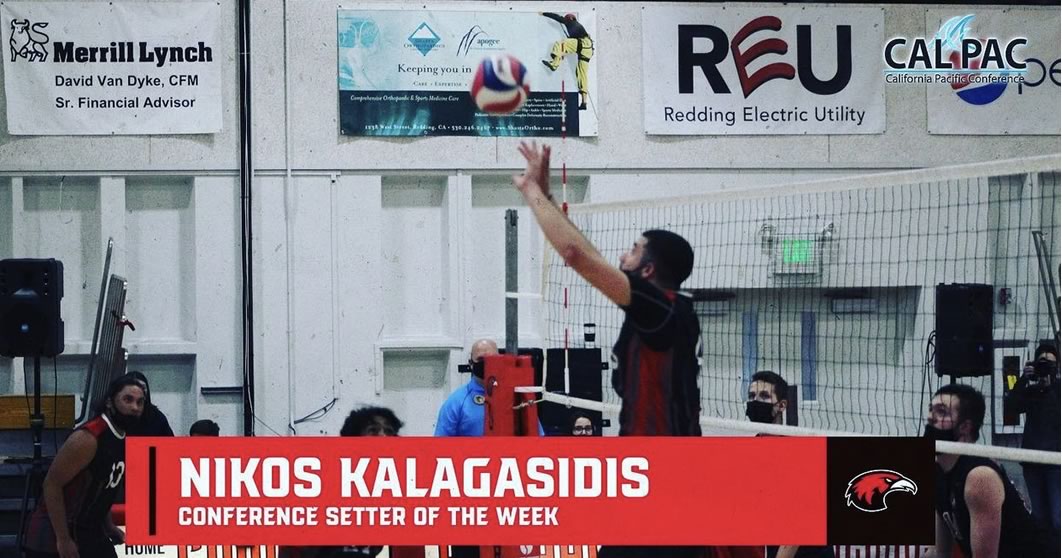 The Greeks of America continue their championship quests, fully committed to hard work and in laser-focused mode, during an extremely successful week with 5 wins in 5 matches. Recording the first double-double of the year with 14 kills and 11 digs, Angelos Mandilaris has significantly helped Ball State to an incredible 11-2 record! Traveling further west, in beautiful Hawaii, the amazing duo Chakas-Mouchlias raised the Rainbows to number 3 in the national rankings, whilst breaking records again! Meanwhile, in volley-loving California, after his great performance last week, Kalagasidis was named setter of the week in the CalPac conference! He also had a new season high in kills and with the rest of his Red Hawks teammates they clinched the perfect 4-0!

Dimitris Mouchlias & Spyros Chakas
With another victory, the 9th in a row, and with a great record of 13 wins and just 2 defeats, the University of Hawaii and Greek Rainbow Warriors Mouchlias and Chakas continue with their schedule. On February 20th, in the 3rd and final match against Lincoln Memorial University, the Rainbow Warriors had another "sweep" before the start of their obligations in the Big West Conference. More specifically, Mouchlias scored 6 kills, 1 block assist and 3 digs while Chakas with a new personal record of 17 kills, 1 assist, 3 aces, 3 block assists and 4 digs was his team's top scorer with 22.5 points.

Angelos Mandilaris
Mandilaris' Ball State is back in the winning column after the two victories against Lindenwood (3-1) and Quincy University (3-0). With 11 total wins and 2 losses (3-1 in MIVA), the Cardinals are in 8th place nationally in the Division I / II coaching poll. Regarding the 2 matches of the previous week, the graduate student participated only in the 1st, adding another very good performance in his already rich bio, marking the first double-double of the year, with 14 kills and a season-high 11 digs. He also recorded 1 ace and 1 block.

Next obligations:
11/2 vs New Jersey Institute of Technology
12/2 vs Princeton

Michalis Kagialis & Nikos Kalagasidis
With a perfect start in CalPac and a 4-win streak, Simpson University (5-3 overall, 4-0 CalPac) of Kagialis and Kalagasidis continues its obligations. With the inclusion of two more sweeps against # 15 UC Merced (3-1) and Pacific Union College (3-0) the Greek internationals, along with the rest of the Redhawks, remain undefeated in the 2nd week of conference play. Regarding the players’ performance, in the 1st match, Kagialis scored 5 kills with a 62.5% efficiency and 4 solo blocks, while Kalagasidis had 2 kills, 25 assists, 2 solo blocks and 3 digs. In the 2nd victory over PUC, the Athenian middle had 2 kills, 1 assist, 1 solo block, 1 block assist and 3 digs and the setter from Thessaloniki had a season high 5 kills, along with 24 assists, 1 ace, 2 solo blocks and 5 digs.

Next obligations:
4/2 vs # 2 Benedictine University at Mesa
5/2 vs Park Gilbert University