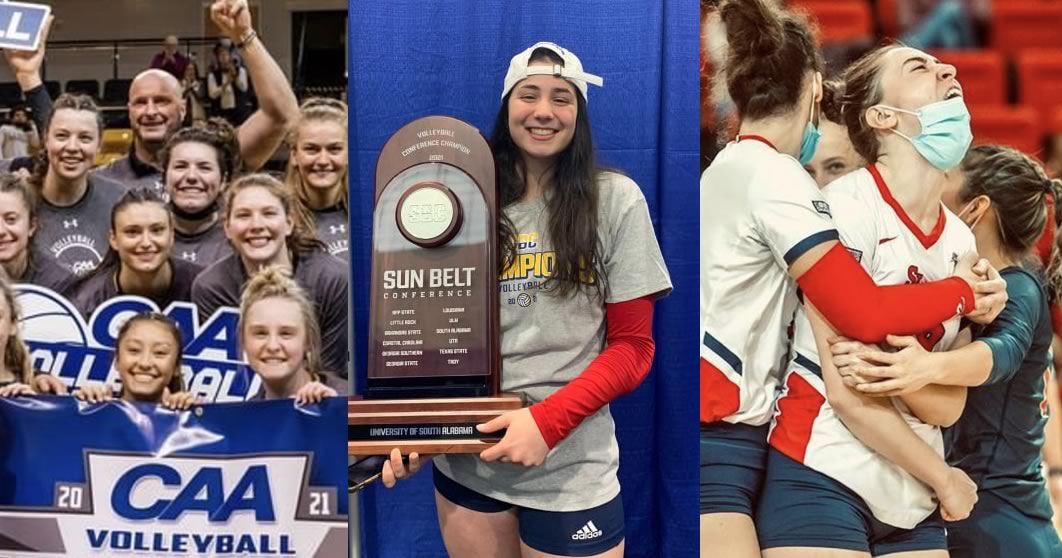 Bakodimou’s Towson was CAA Champion in 2019 and in 2020, and now in 2021! With this streak Towson is the first university after George Mason in 1996 to get 3 titles in a row at the Colonial Athletic Association Conference! Along with Bakodimou, Eirini Glynou’s University of South Alabama captured its first program SBC Championship title! With a new career high of 18 digs, Iro Hounta completed this season by raising the bar even higher for next year! Another double-double with 14 kills and 13 digs for Darina Kumanova in the win against the Top-25 University of San Diego! Aristea Tontai added another very good appearance in her bio, being a wall for the Miami Hurricanes with a new career high of 10 blocks! Ariadni Kathariou bids farewell to her St. John’s Red Storm season emphatically, and captures second place overall in total blocks in NCAA D1!

The season for "red storm" (15-17,6-12) ends with a bittersweet taste after adding a victory and a loss. In more detail, on Friday 19/11 and with a 3-1 victory against Providence College, Kathariou had a very good performance with 14 kills, 1 ace, and 7 blocks. On Sunday the day ended with a 3-0 defeat against Creighton University and Ariadni having 1 kill, 2 aces, 3 blocks and 2 digs. In an unprecedented and difficult to repeat feat for a Greek college volleyball player, Ariadni secured second place overall in total blocks in NCAA D1 volleyball!

The Green Bay Phoenix (15-16,10-8) was defeated by University of Illinois at Chicago in the first round of the Horizon League Tournament and unfortunately their season came to an end. Iro Chounta had a new career-high for the Phoenix in digs with a total of 18, while also adding 5 kills, 6 block assists, 3 aces and 2 assists. Zoi Sheroli helped her team defensively with 4 digs. Green Bay finished their season with an overall record of 15-16, being 10-8 in Horizon League.

The Pacific Tigers (13-15, 10-7) recorded an impressive win against the University of San Diego, which is ranked 25th in the Nation according to the AVCA coaches poll. Darina Kumanova led her team to the ‘dub’ as she had another double-double with 13 kills, 14 digs, and 2 aces. In the second match of the week, Kumanova’s Tigers were defeated by WCC champions and perennial NCAA Final Four contenders BYU (3-0). The Bulgarian outside had a good performance with 8 kills, 7 digs, and 1 block assist.

Azusa Pacific University bounced back last week as they defeated Biola University. Ioanna Georgatzi helped her team offensively as she was 36% productive for the Cougars. The Greek outside hitter had 6 kills and 1 block assist. On November 20th the Cougars faced the CUI Eagles. Georgatzi was very efficient as she had 35% hitting efficiency with 6 kills, 2 block assists, and 2 digs. The match ended in favor of the CUI Eagles. This was the last match for the season for APU, finishing with an overall record of 18-10 and 13-7 in PacWest.

Karakasi had another solid performance for Syracuse University (16-13, 5-12). Despite Elena’s effort, Syracuse was defeated by Duke University (3-1) on November 21st. The Greek setter had 27 assists, 1 kill, and 6 digs for the ‘Cuse Orange.

The University of Miami (22-4, 13-3) is recording more wins for the ACC championship. On November 19th the Canes defeated The Florida State University, in a crucial and epic rivalry matchup in Tallahassee, in a hard-fought 3-2 away win. The Greek middle blocker had a phenomenal performance as she had 10 kills, 3 blocks, 3 serve aces, and 1 assist. In the match against University of North Carolina, her previous team during the course of her undergraduate studies, Tontai had 8 block assists, 2 solo blocks, and 1 kill. The Canes defeated Chapel Hill in 4.

End of season for the University of Mount Olive Trojans(15-14, 10-9) after they got defeated by Emmanuel College Lions (3-0). Nafsika Papavasileiou had 6 blocks, 3 digs, and 1 kill for the Trojans. The Mount Olive Trojans ended their season with a 15-14 overall record and a 10-9 record for the conference Carolinas.

A great season for Charitonidi and UTRGV came to an end this past weekend, as the Greek outside hitter’s team lost against Grand Canyon (1-3), during the WAC conference tournament quarterfinal match up. Charitonidi finished the match with 7 kills, 1 assist, 2 blocks and 8 digs.

Baka’s St Mary’s College faced some really good opponents this past weekend, as they took on against #23 San Diego and #4 BYU. Despite their solid effort, Baka and St Mary’s College were defeated in both games with 1-3. In the second match, Baka had 8 kills, 1 assist, 2 aces, 3 blocks and 7 digs.

With a victory against Marist (3-2) in the quarterfinal match of the MAAC conference tournament, Tselepi and Zampati’s Quinnipiac advanced to the semifinal match up against Rider. However, their season came to an end as they lost against Rider (0-3) the next day. During the match against Marist, Tselepi had 12 kills, 4 blocks and 5 digs, while Zampati had 9 kills, 1 ace, 1 block and 10 digs. The Greek internationals did not participate in the match against Rider.

The season also ended with a bittersweet taste for Faki with her last two collegiate matches taking place on Thursday 18/11 and Saturday 20/11. On Thursday against Nevada University with a 3-0 victory, Faki had 11 kills, 1 ace, and 5 digs. On Saturday 20/11, with a 3-1 defeat against San Jose State University, Zoi had 4 kills, 1 ace, 1 block and 10 digs.