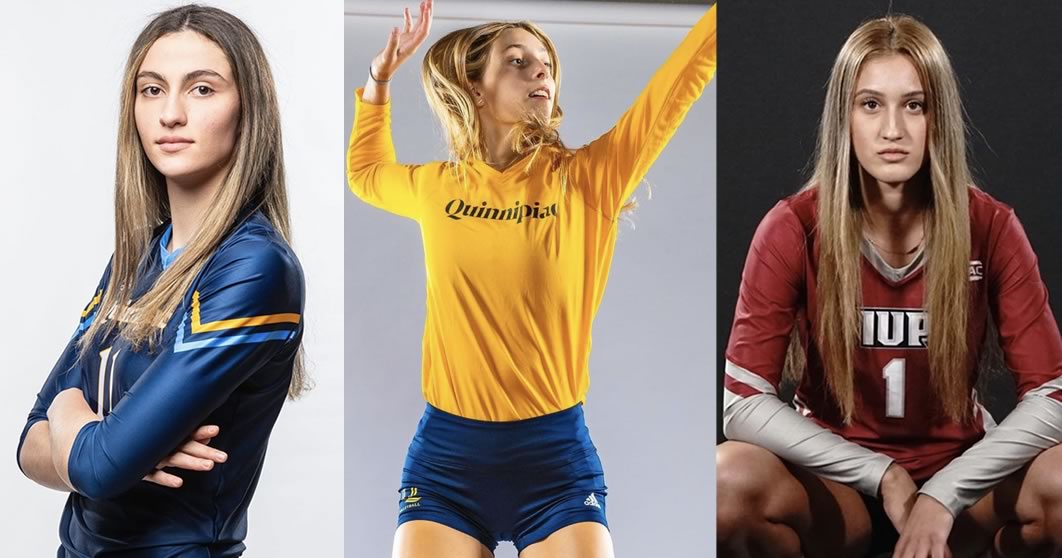 Stefania Anagnostou had the time of her life last week! First, against Seton Hill she broke her personal record with 14 kills and then she recorded the first double-double of the season against Gannon University! With Tselepi having 20 kills and Zampati having 26 digs in just 6 sets, Quinnipiac definitely had a winning week!

Stefania Anagnostou
The Greek outside hitter played a key role in the IUP’s (12-13, 3-7) win against Seton Hill. More specifically, Stefania Anagnostou recorded a career-high with 14 kills and a 65% hitting efficiency, 2 block assists, and 2 digs. In the second match of the week against the former PSAC champions Gannon University, despite the 3-0 loss, Anagnostou recorded her first double-double for the season with 10 kills and 11 digs.

Elena Karakasi
On October 22nd Syracuse University (15-7, 4-6) played against Georgia Tech. The match did not end in favor of the Syracuse Orange. Elena Karakasi recorded 48 assists, 2 kills, 1 ace, 2 block assists, and 4 digs. In the second match of the week, Karakasi’s Syracuse defeated Clemson University in a 3-0 clear win. The Greek setter had 29 assists, 4 kills, 6 digs, 1 solo block, and 3 block assists.

Iro Hounta
The University of Wisconsin Green Bay (10-12, 5-5) recorded another Horizon League win against IUPUI (3-0). Iro Hounta had a solid performance and helped her team to advance to a win against the Indiana Jaguars. More specifically, she had 6 kills, 1 dig, 2 block assists, and 1 ace.

Katerina Papazoglou
A difficult week for the Temple (5-16, 1-9) as they lost from Tulsa University. The Greek outside hitter made a phenomenal impact on offense and defense as she had 9 kills, 2 assists, 1 ace, 1 block assist, and 13 digs. On October 24th Papazoglou’s Owls lost to Wichita State. Katerina Papazoglou had 2 kills, 4 digs, 2 block assists, and 1 ace.

Marialena Mpampiri
Mpampiri’s Lyon College (10-13, 1-3) fought but got defeated by Blue Mountain College last week, in a five-set thriller. The Greek middle blocker had a good performance and she scored 6 kills for the Lady Lyons, adding 2 aces, 1 solo block, and 3 block assists to her individual stats.

Darina Kumanova
The Pacific Tigers (8-13, 5-5) recorded an important win against the University of San Francisco on October 23rd. Darina Kumanova played a major role in her team’s win. More specifically, she had 14 kills, 1 ace, and 5 digs.

Ariadni Kathariou
This weekend started ideally with a 3-0 victory for the "Red Storm" and the Greek middle blocker against Xavier University. Kathariou had 4 kills  and 2 blocks. The next day, however, with a 3-1 defeat, they closed this weekend against Butler University with Ariadni having 1 kill and 5 blocks, which helped Ariadni hold on to her 33rd spot nationally for total blocks.

Next obligations:
29/10 VS Georgetown University.

Efrosini Bakodimou
The victories for Towson University (19-3, 7-3) and the excellent performances of Bakodimou continue! In detail, on Friday 22/10 Fay led her team to a 3-1 victory against William and Mary University and had 14 kills , 3 aces, 5 blocks and 4 digs. Another victory the next day 3-0 with Fay in another excellent performance while she had 8 kills, 1 ace, 1 block and 1 dig. Fay is continuing as one of the nation’s elite servers, currently sitting tight at the 3rd spot for total aces in NCAA Division 1.

Next obligations
29/10 VS University of Delaware.

Zoi Faki
Although the results were not what they expected, Faki, on Thursday against Colorado State with a 2-3 defeat had an excellent performance with 20 kills, 1 block and 9 digs! On Saturday against Wyoming University and with a 3-0 defeat, Faki had 3 kills, and 11 digs.

Next obligations:
28/10 VS Utah State

Ioanna Charitonidi
One win and one loss for UTRGV (13-6, 5-1) and Charitonidi against Seattle U (3-1) και Chicago State (1-3) this past weekend of competition within the WAC conference. The Greek outside hitter saw action in both matches. More specifically, in the first match against Seattle U she had 7 kills, 1 block and 3 digs. In the second match against Chicago State, Charitonidi had 5 kills, 3 aces, 1 block and 7 digs.

Elena Baka
Baka is back! After multiple weeks of suffering from her injury, Baka is stronger than ever and brought wins for St Mary’s College (11-8, 5-5) within another weekend of competition in the WCC conference, against San Francisco (3-0) και Santa Clara (3-2). Baka saw action during the second match against Santa Clara, where she had a really good performance. More specifically, she recorded 3 kills in only 6 attempts with no hitting errors, 1 assist and 7 digs.

Georgia Tselepi & Olga Zampati
Tselepi and Zampati’s Quinnipiac continued its competition within the MAAC conference with positive results, as they notched two wins this past weekend. Good performances from both Greek players. More specifically, in the first match against Canisius (3-1), Tselepi had 13 kills. 1 ace and 1 dig, while Zampati had 8 kills, 1 assist, 2 aces and 14 digs. In the second match against Niagara (3-1), Tselepi added 7 more kills, 1 ace, 2 blocks and 6 digs, while Zampati had 11 kills, 1 assist and 12 digs, adding another double-double to her career.

Next Obligations:
30/10 vs Fairfield

Next Obligations:
30/10 vs Saint Louis

Elisavet Papageorgiou
Two losses for Papageorgiou and Eastern Illinois (7-14, 0-11) against Morehead State with 0-3 and 1-3. Papageorgiou saw action in both matches. She had 3 kills, 1 ace, 10 blocks and 10 digs overall.

Mariana Anastasiadi
Anastasiadi’s Oakland City University (9-12, 6-7) recorded two losses this past weekend of competition within the RSC conference, against Brescia (0-3) and  Indiana University East (0-3). In the first match against Brescia, the Greek setter had 2 kills, 14 assists, 1 ace and 4 digs, while at the second match against Indiana University East, she had 1 kill, 7 assists and 2 digs.

Anna Gioranidi
Gioranidi can pass, hit, block, dig and now she sets! Columbia (5-13), which competes in the Ivy League, had two losses last week on the 20th against Rider (1-3) and the 23rd against Cornell (2-3). The Greek outside hitter had to play as a setter after the 3rd set against Cornell and not only changed the flow of the game but also gave assists to her pin hitters leading her team to the 5th set. Despite the fact that they lost the 5th set 10-15 and eventually the match, Anna’s ability to play all positions did not go unnoticed!