Ucar the SWAC setter of the week… again! Personal records are meant to be broken by Koyuncu and Erdi! In the 4th place in NJCAA D1 for total assists… (drum roll) Alexandra Koleva! 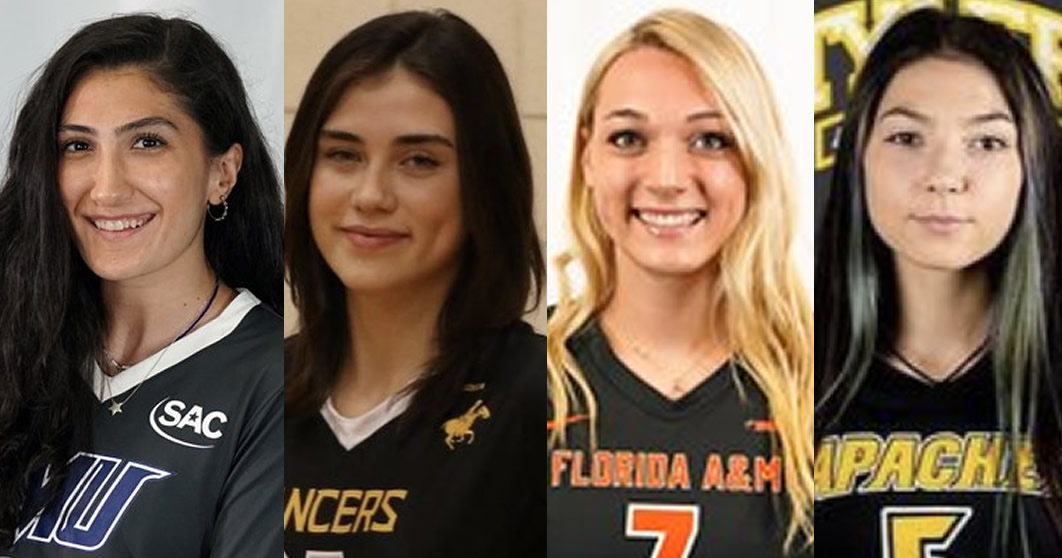 Irem Ucar was named the SWAC setter of the week for the 5th time this season! On the 15th against Anderson senior libero Koyuncu had a new season/career high for the second week in a row, with 34 digs for Lincoln Memorial University. On the 16th against Northwest, freshman middle blocker Asli Erdi had a new season/career high with 8 kills. Alexandra Koleva is ranked 4th in NJCAA D1 for total assists!

Irem Ucar
On Monday 11th of October, FAMU defeated Southern University in 3 sets. Setter Irem Ucar led the team with 41 assists, while adding 3 kills, 1 ace, 2 blocks, and 8 digs. On Sunday afternoon at the Al Lawson Center, FAMU faced Alabama State and besides being up 2-0 they lost in 5. The soon to be named setter of the week, Irem Ucar, recorded 44 assists, 4 kills and 13 digs. After these two matches FAMU kept the high score of 14-6 in the SWAC conference. Something worth to be mentioned is the fact that FAMU is the only team in SWAC with an overall record above .500 as well as the only team with double-digit wins.

Sevgi Koyuncu
With 1 win and 2 losses the LMU Railsplitters continue their season with Sevgi Koyuncu breaking her personal record again for the 2nd week in a row. On the 13th, Lincoln Memorial University (5-12,3-8) had their 3rd home win of the season, this time against King University, whom they defeated in 3. The senior libero recorded 2 assists and 20 digs in that match. On the 15th, they played against Anderson and lost in 5. In this incredible match, Sevgi Koyuncu had a new season and career high of 34 digs accompanied with 2 assists and 1 ace. Lastly, on the 16th they lost in 3 from Newberry. Sevgi recorded 4 assists and 13 digs.

Asli Erdi
Such an unlucky week for Eastern Wyoming College (8-12, 3-6) and Asli Erdi. The Lancers suffered 3 losses last week against Western Nebraska CC, Central Wyoming College and Northwest College. Against WNCC, Asli participated in 1 set and had 1 dig and 1 block while against CWC she had 2 kills, 1 block and 1 dig. Lastly, on the 16th against NC, the Turkish middle blocker recorded a new season and career high with 8 kills adding 1 block and 1 dig.

Alexandra Koleva
The third week of October was definitely great for Tyler College and Alexandra Koleva. After last week’s sweeps, Tyler now has an overall record of 19-9 and a 7-5 conference record. On the 12th, against Trinity Valley Koleva recorded 2 kills, 36 assists and 2 blocks while on the 14th against Navarro the young setter had a full stat sheet with 3 kills, 25 assists, 2 aces, 6 digs and 3 blocks. With this season’s amazing performances, Alexandra Koleva is currently ranked 4th in NJCAA D1 for total assists.

Berra Tugce Tok
Minot State University suffered two more losses last week, still not being able to pick up a win this season. On the 15th against University of Minnesota at Duluth, young Berra Tok participated in all 3 sets and recorded 1 kill and 1 block. The next day, against #14 St. Cloud State University Berra recorded 3 kills in 8 attempts.

Isil Yilmaz
The first losing week for Odessa College. The Wranglers lost their winning streak on the 13th when they played against New Mexico Military Institute. The game ended in favor of NMMI in 3-1 with Yilmaz recording 2 assists and 15 digs. On the 16th, the Odessa Wranglers lost in 5 from New Mexico Junior College. In that spectacular game, Yilmaz did not get the chance to participate. Including last week, Odessa currently has an overall record of 12-5 and a 5-4 conference record.

Next obligations:
20/10 vs Frank Phillips College

Karya Suvarioglu
Guess who added 5 more dubs in their record?! It is Yavuz and Suvarioglu’s New Mexico Military Institute! With a great 23-4 overall record and an almost perfect conference record of 7-1, the Broncos were able to win every single one of their matches last week. On the 13th, in the 3-1 win against Odessa College Suvarioglu had 17 assists, 3 digs and 4 blocks. On the 15th against Monroe, Suvarioglu had 2 digs and 1 block and against Indian Hills CC she had 24 assists, 6 digs and 3 blocks. Lastly, despite the two matches in 1 day, the Broncos swept Johnson County CC and had a 5-set thriller against Iowa Western CC. In the first match Suvarioglu had 10 assists and 3 digs and in the second she had 1 kill, 21 assists, 4 digs and 4 blocks.

Duru Ozkan
In the 2nd place of NJCAA and with two more wins and 1 loss, Iowa Western CC continue their season with an incredible record of 23-2 and a 2-0 perfect conference record. On the 15th, the Reivers swept Johnson County CC. Ozkan participated in all 3 sets and recorded 1 kill, 1 assist, 1 ace and 12 digs. In the double game day on the 16th, the IW Reivers lost in 5 from New Mexico Military Institute and swept Monroe College. In the tough loss, Ozkan had 3 assists and 28 digs while in the great win she recorded 4 assists and 11 digs.

Elif Su Yavuz
Auburn University volleyball played against Missouri twice last weekend. They first won easily in 3 on Saturday October 16th at Auburn Arena to pick up the program's first win in the series since 1996. Senior Elif Su Yavuz recorded 3 kills, 1 assist, 2 blocks and 3 digs. Unfortunately, the next day, Missouri took its revenge as AU was defeated in 5 with the sets being super close (27-25, 20-25, 25-23, 21-25, 15-11). Senior Elif Su Yavuz had 6 kills in the match, a career high in conference action. She also added 2 blocks and 1 dig.

Yagmur Cinel
The Hofstra University women's volleyball team suffered a sweep at the hands of Charleston last Saturday afternoon at TD Arena. Yagmur Cinel had 2 kills, 2 aces and 3 digs. Facing Charleston again the next day, Hofstra resisted, but that resistance was not enough to win so they fell in 4. Yagmur Cinel recorded 6 digs and 1 block.

Cagla Bengi & Tsveti Ilieva
Seton Hall drops to 10-12 overall on the season and 2-6 in the BIG EAST, after last weekend’s results. The Seton Hall women's volleyball team suffered a 3-0 sweep on Friday, falling to DePaul in front of a capacity crowd at the McGrath-Phillips Arena. Sophomore Cagla Bengi taillied a team-high 15 assists to go with 5 digs and  1 kill, while Tsveti Ilieva had 4 kills, 2 blocks and 3 digs. On Saturday evening,Seton Hall fell to Marquette, 3-1. Cagla Bengi finished with 1 kill, 1 ace, 21 assists, and 5 digs while Ilieva had 9 kills and 3 digs. With 21 assists Cagla Bengi surpassed the 400-assists milestone for her career.