Karakasi among the 10 best “Orange” setters! Mpakodimou is killing it from the service line! Zampati with 12! Kumanova with another double-double for the big upset against #23! 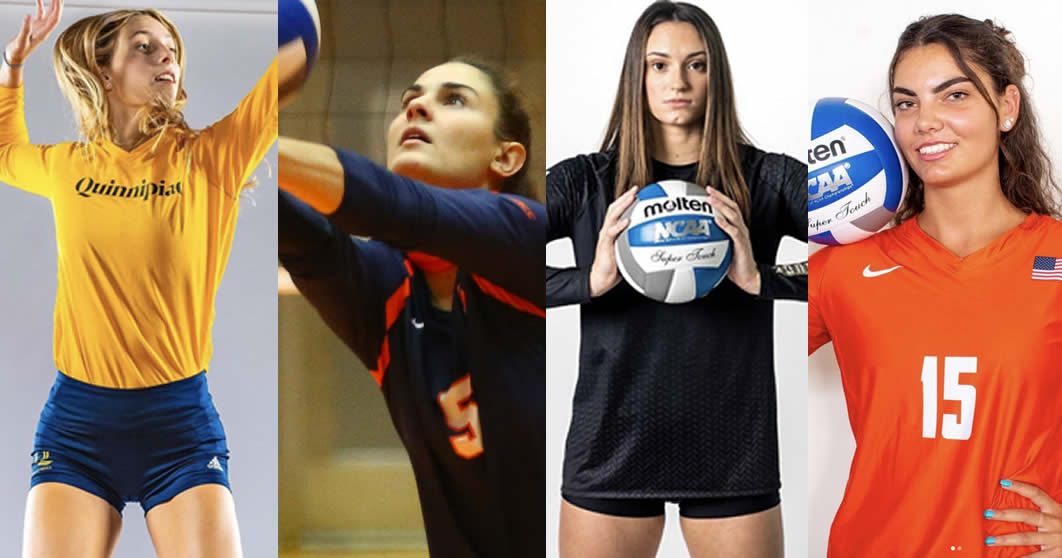 After recording her 2000th assist, Elena Karakasi is now among the 10 best setters of all times of the big Syracuse University! Mpakodimou is ranked 1st in NCAA for total service aces! Another double-double for Olga Zampati, this time with 12 kills and 12 digs in the win against Saint Peter’s! Darina Kumanova had another double-double with 12 kills and 13 digs in the big upset against #23 Pepperdine!

Unstoppable, Elena Karakasi recorded her 2000th career assist for Syracuse University (14-4, 3-3) The Greek senior setter is now the 10th all-time assist leader for the ‘Cuse Orange. In the match against Notre Dame Elena recorded 13 assists and 2 digs for the Orange and in the game against Louisville, she had 30 assists, 3 kills, and 3 digs. Besides Karakasi’s effort, both matches ended in favor of the opponents.

Weekend "battle" for the girls of Towson University (17-3, 5-3) with very good  matches, as they faced the College of Charleston on Saturday 9/10 where they won 2-3 and on Sunday where they lost 3-2! Fay led the Towson girls to victory on Saturday as she had 13 kills, 3 aces, 1 block and 5 digs! The very next day, Fay’s performance was just as good, with 18 kills, 4 aces, 1 block and 7 digs, despite the result. With her consistent output from the service line, Fay is ranked 1st in the NCAA for total service aces!

Hutchinson Community College faced Seward County Community College where they lost 3-0 on Wednesday 6/10 with Christodoulou scoring 5 kills, 1 block and 4 digs. On Friday 8/10 they scored a 3-1 victory against Jefferson College and the Greek outside hitter had 4 kills, 3 blocks and 5 digs.

Darina Kumanova led her team to a five-set thriller win against Pepperdine. On October 7th the Pacific Tigers (7-11, 4-3) defeated the 23rd ranked team in the nation, the University of Pepperdine. The Bulgarian outside hitter was the protagonist of the night, as she made a double-double, 12 kills, 13 digs, 1 ace, and 1 block assist for the Tigers. The second match of the week was a five-set thriller as well but unfortunately ended in favor of LMU. Kumanova had another great performance with 13 kills, 8 digs, and 1 ace.

First conference win for Papavasileiou’s University of Mount Olive(6-11, 1-6). The Trojans played against Belmont Abbey College, Southern Wesleyan University and North Greenville University. The Trojans recorded a win over Southern Wesleyan University (3-0). The matches against Belmont Abbey and NGU did not end in favor of the Trojans. It is notable to mention that the Greek outside hitter had.333 hitting percentage against SWU and .600 in the match against  North Greenville. At the end of the week, Papavasileiou had 7 kills, 1 block, 1 block assist, and 1 dig.

Ideal week for the Azusa Pacific Cougars(12-4,7-1). The Cougars had phenomenal 3-0 wins against the Academy of Art and Fresno Pacific College. Ioanna Georgatzi had 6 kills, 3 block assists, 1 dig, and 1 block.

Katerina Papzoglou helped the defense of her team but the Temple Owls (4-13, 0-6) got defeated by the Eastern Carolina University and the University of Cincinnati (10-4, 5-1). Katerina had 13 digs, 1 kill, and 1 ace.

The UWGB Phoenix (8-11, 3-4) had two thriller matches over the week. On October 7th the Phoenix played against Cleveland State University. Chounta and Sherolli helped their team to win the 5-set match. Chounta played a key role in defense and recorded 13 digs, 2 block assists, 2 aces, 3 assists, and 8 kills. Sherolli made a great serve-receive performance with 4 aces and 2 digs. The match against Oakland University ended in favor of the Oakland bears. Chounta helped the defense of her team once more with 13 digs, 1 block assist, and 1 kill.

Losses on the road for Stamatiou’s Bellarmine (5-14, 1-6) against Lipscomb (3-0) and University of Central Arkansas (3-0). The Greek player saw action in both matches, mainly in the back row. She recorded 6 kills, 6 assists and 16 digs overall.

The winning streak continues for Charitonidi’s UTRGV (10-6, 2-1) within the WAC conference competition. More specifically, the Greek outside hitter helped her team beat Abilene Christian (3-2) and Tarleton (3-1). In the first match, Charitonidi had 9 kills and 12 digs, while in the second match she had 4 kills, 1 assist, 1 ace, 1 block and 8 digs.

Two more wins for Giourda and Coastal Georgia (18-2, 5-1) within the SUN conference competition against Warner University (3-0) and Keiser University (3-0). The Greek outside hitter saw action in the first match, where she recorded 5 kills and 2 digs.

In the battle of the Ivy League internationals, Dankinova’s Princeton and Gioranidi’s Columbia, Princeton prevailed against Columbia with 3-0. Good performances by Columbia’s Greek setter, Gioranidi, who saw action in crucial moments during the match.