Bakodimou in the Top-8 for aces! Kathariou in the Top-10 blockers of NCAA! New personal record for Chounta! More double-doubles for Karakasi (#25 for assists in NCAA), Papazoglou, Anastasiadi and Stamatiou! Amazing 15-1 for Giourda’s Coastal Georgia! 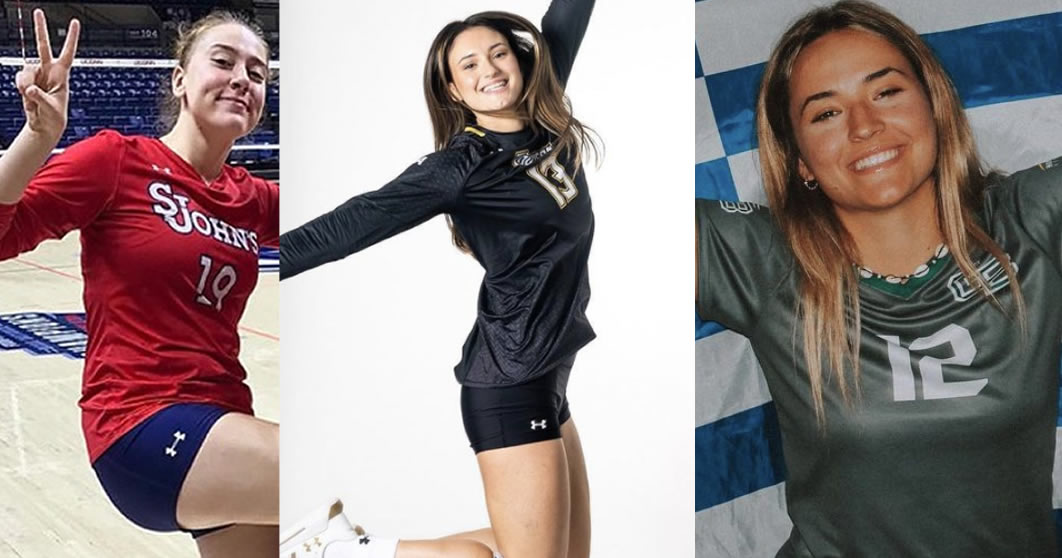 Bakodimou is not an expert in stamp collecting but … ace collecting! The Greek outside hitter entered the CAA conference adding 6 more (!) against UNC Wilmington and now is in the Top-8 of NCAA! Kathariou literally blocked Seton Hall, and now with a new record of kills and 5 more blocks she is in the Top-10 of America as a blocker! Last week, Iro Chounta broke her personal record not once, but twice! Firstly against Purdue Fort Wayne with 17 digs and then in the big win against IUPUI, Iro Chounta broke her record AGAIN with 19 digs! Another double-double for Elena Karakasi, Katerina Papazoglou and Marianna Anastasiadi with 42 assists-10 digs, 10 kills-10 digs and 16 assists-11 digs respectively! Chrysanthi Stamatiou recorded her first double-double of the season with 14 kills and 11 digs! Such a great start for Elena Giourda’s Coast Georgia having 15 wins in 16 matches and still remaining undefeated in home games!

Efrosini Bakodimou
With a 3-0 victory against the University of North Carolina Wilmington and a very good start for Fay, and the girls of Towson University on Saturday the 25th on their first conference game. Bakodimou recorded 5 kills and 3 digs. With the same opponent and the same result with a 3-0 victory, this weekend for the Greek outside hitter who was on fire on the service line with 6 aces, 9 kills, 3 blocks, and 3 digs.

Next obligations
2/10 vs Elon University

Efrosini Alexakou & Ariadni Kathariou
Despite the 3-0 defeat against UCONN on September 25τη, the Greeks of the "Red Storm" had very good performances with Alexakou having 9 kills, 2 aces, 2 blocks, and 12 digs and Kathariou having 5 kills and 3 blocks. Despite that loss the team overcame themselves , the next day, Saturday, September 26τη, and they won their first Big East victory against Seton Hall 3-1. Kathariou had 7 kills and 5 blocks. Alexakou did not participate due to an  injury.

Next obligations:
1/10 vs Creighton University

Iro Chounta & Zoi Sherolli
Great week for the Green Bay Phoenix, after having 2 phenomenal wins over IUPUI(3-1) and Purdue Fort Wayne (3-2). Iro Chounta played a key role in both matches as she was the dig leader for Green Bay in the first match and second in the second one. Hounta recorded a personal record with 6 kills, 2 aces, 3 blocks, and 17 digs in the match against Purdue Fort Wayne. In the match against IUPUI, the Greek players had a huge impact on their team’s win. Chounta recorded back-to-back new personal records on defence and she also added 6 kills, 19 digs, 1 ace, and 3 blocks. Sherolli recorded 1 kill, 1 ace, and 5 digs in this match.

Elena Karakasi
The Syracuse Oranges played against Boston College in their conference-opening match. The match ended in favor of the Baston eagles. Although, the Greek setter has established herself as the assist leader for the oranges this season. She had 29 assists and 2 digs . In the second match of the week, Karakasi had a tremendous performance. The Syracuse Oranges defeated Duke in 3-0 clear win. Elena Karakasi led her team to the win and had another double-double with 42 assists, 10 digs and 2 kills.

Katerina Papazoglou
In the first match of the week, the Temple Owls played against SMU and the match ended in favor of SMU (3-1). The Greek outside hitter had 2 kills, 1 ace, and 6 digs. The second match of the week ended in favor of the University of Memphis. Despite the result, Katerina Papazoglou had an incredible performance with a double -double and recorded 10 kills and 10 digs for the Temple Owls.

Marianna Anastasiadi
Anastasiadi’s Oakland City University recorded 1 win and 2 losses this past weekend of competition, during the second week of RSC conference play, against Indiana University Kokomo (0-3), Midway University (3-1) and Indiana University Southeast (0-3). The Greek setter saw action in all three matches. More specifically, against University Kokomo, she had 2 kills, 15 assists and 5 digs. During the match against Midway University, Anastasiadi had 1 kill, 15 assists, 2 aces and 7 digs, leading her team to victory. In the last match of the weekend, she added 16 more assists and 11 digs, recording another double-double!

Marialena Mpampiri
Hard week for Mpampiri’s Lyon college. At the beginning of the week, the Lady Lyons played against John Brown University. The Greek middle blocker had a great game and recorded 5 kills, 1 ace,  3 blocks, and 1 dig, but the game ended in favor of John Brown University(3-0). In the second and the third matches of the week, Lyon College got defeated by Philander Smith College(0-3) and Central Baptist College(1-3). Marialena Mpampiri had 2 impressive games and she recorded 10 kills, 5 blocks, accompanied by 7 digs and 1 ace.

Nafsika Papavasileiou
Hard week for the University of Mount Olive Trojans. Papavasileiou’s school got defeated by Chowan University (3-0), Francis Marion University (3-2), and UNC Pembroke (3-0). The Greek outside hitter helped her team in all possible ways as she is coming out of an arm injury. She recorded 6 kills, 10 digs, and 4 blocks for the Trojans.

Ioanna Georgatzi
The Azusa Pacific Cougars had a great week! The first win for Georgatzi’s school was recorded against Holy Names University (3-0). The second win of the week was against Dominican University(3-0). The Greek player helped her team and recorded 9 kills, 2 blocks, and 2 digs.

Stefania Anagnostou
Hard week for Indiana University at Pennsylvania, despite Anagnostou’s help. In the first match of the week, the Crimson Hawks got defeated by Gannon University (3-0). In the second Game of the week, Anagnostou’s school got defeated by Seton Hill (3-2). Despite the two negative results, IUP bounced back with a 5-thriller win against Shippensburg. The Greek outside hitter had great performances and helped her team by recording 12 kills, 1 ace, 13 digs, and 1 block for the Crimson Hawks.

Darina Kumanova
This week the University of the Pacific played against BUY and the University of San Diego. Both matches did not end in favor of the Pacific Tigers despite Kumanova’s phenomenal performances. In the match against BYU, Komanova recorded 6 kills, 4 digs, and 2 assists. In the match against San Diego, Kumanova was on fire and she recorded 11 kills and 3 digs for her team.

Ioanna Charitonidi
Two matches for Charitonidi’s team this past weekend of competition, with the second match marking the beginning of UTRGV’s competition within the WAC conference. Despite the back to back good performances from the Greek outside hitter, UTRGV’s team was defeated 3-1 at both matches against UTEP and Stephen F Austin. More specifically, against UTEP Charitonidi had 6 kills, 1 assist, 3 blocks and 11 digs, while against Stephen F Austin, Charitonidi recorded 8 kills, 2 aces, 2 blocks and 9 digs.

Next Obligations:
2/10 vs Lamar

Georgia Tselepi & Olga Zampati
One loss and one win for Tselepi and Zampati for this past weekend's competition against Niagara (1-3) and Canisius (3-1). Quinnipiac University’s record within the MAAC conference is now 2-2. On September 25th against Niagara, Tselepi had 8 kills, 1 assist, 1 block and 5 digs, while at the same match Zampati had 5 kills and 11 digs. The next day against Canisius, Zampati added 8 more kills, 2 aces, 1 block and 2 digs.

Markella Lanara
Lanara’s George Washington University entered the A-10 conference competition with two losses against Dayton (1-3) and Duquesne (2-3), despite the Greek middle blocker’s good performances. Against Dayton, Lanara had a great performance with 7 kills (.400 hitting percentage), 1 ace and 3 digs. In the match against Duquesne, the Greek player had another strong performance with 5 kills, 3 aces, 5 blocks and 3 digs respectively.