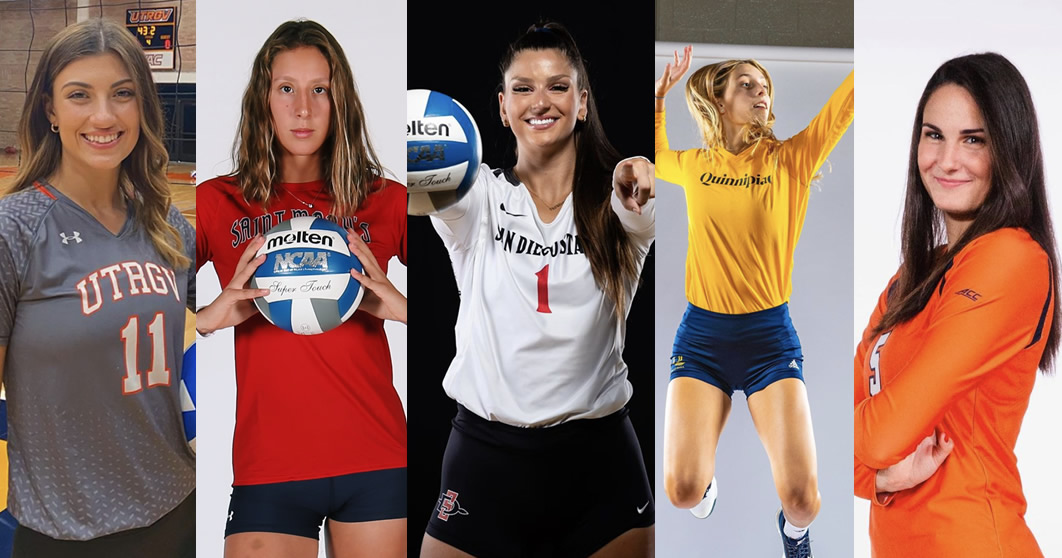 Charitonidi’s UTRGV dominated during their season opener at the New Orleans Invitational, with two wins on August 27th against Alcorn State (3-0) and New Orleans (3-1). The Greek player saw action in both matches, with two solid performances which helped lead her team to the two victories. Against Alcorn State, Charitonidi had 4 kills with an impressive .444 hitting percentage, and 4 digs. In the second match, against New Orleans, the Greek player collected 12 kills and 13 digs, recording her first double-double of the season!

Saint Mary’s College’ volleyball team showed dominance during the first weekend of the season with 3-0 wins against Siena and Wyoming, with Elena Baka being one of the team’s key players. Against Siena, Baka recorded 6 kills with a .417 hitting percentage, 1 assist and 4 digs. Regarding the two matches against Wyoming, the Greek player had 11 kills, 12 digs and 1 block, recording her first double-double of the season in the first match and 8 kills, 1 assist, 1 ace and 2 digs in the second match.

Quinnipiac University opened their season with the URI Invitational, in which Zampati’s team recorded 1 win and 2 losses. In its first day of competition on August 27th, Quinnipiac recorded their first win of the season against Holy Cross (3-2) and first loss against Rhode Island (1-3). Zampati had 14 kills, 2 assists and 12 digs to record her first double-double of the season, helping her team get its first win. Against Rhode Island, Zampati had another solid performance with 12 kills, 2 aces and 11 digs, recording her second straight double-double! On August 28th, Quinnipiac lost against Bryant, while Zampati notched 5 kills, 2 aces and 6 digs.

Karakasi’s Syracuse University played against Buffalo University and the University of Connecticut on August 27th. Both matches ended in favor of Syracuse University (3-2  vs Buffalo, 3-0 vs Connecticut), the Greek setter was leading in assists in both matches. In their first match against Buffalo, Karakasi appeared in all 5 sets and had 2 kills, 40 assists, 8 digs, and 1 ace. In the second match of the day against Connecticut, Karakasi recorded 4 kills, 33 assists, 1 ace, and 8 digs. On August 28th, Karakasi’s Syracuse played against the University of Albany. The match ended in favor of Syracuse Orange and Karakasi was once more the leader of assists for the Oranges. The Greek setter recorded 27 assists, 1 ace, 4 kills and 9 digs.

9/3 vs University of Albany and Cornell

On August 27th,Lanara’s George Washington University recorded two losses against Howard (0-3) and American (1-3), despite the Greek middle blocker’s solid performances. Lanara recorded 3 kills and 1 dig against Howard, and 3 kills, with a .429 hitting percentage, 1 block and 2 digs against American.

9/3 vs Bellarmine
9/4 vs Tennessee State and SCS

Papageorgiou’s Eastern Illinois University had a strong start to their 2021 season, recording 3 wins against IUPUI, Bellarmine and Chicago State. The Greek player saw action in two of the three matches. Against IUPUI and Bellarmine, Papageorgiou had 6 kills, 1 ace and and 3 digs in total for both matches.

A winning streak for Towson University on 27 & 28/9 ! The Greek outside hitter scored 9 points in the first match against Morgan State with 4 kills , 2 blocks, 5 digs and 4 aces. Towson's next opponent was Cleveland State University where Fay scored 10 points with 9 kills , 1 ace and 3 digs. The two-day period ended with Towson facing Binghamton University with Bakodimou scoring 12 points with 12 kills and 7 digs. In the last match, however, the Greek outside hitter was on a streak! In the victory against the United States Naval Academy she had 13 kills, 4 blocks, 7 digs and 2 aces!

Mpampiri’s Lyon college had an impressive season-opener with two wins against Paul Quinn College and Southwestern Christian University. In the first match against Paul Quinn College,  Mpampiri had 7 kills combined with 2 digs. The Greek middle was leading the team’s hitting percentage with .462. In the match against Southwestern Christian University, Mpampiri scored 9 points, 7 kills, 1 block, and 1 ace. The middle was leading once more her team’s hitting percentage with .389. On August 28th Lyon College played against Wiley College and Jarvis Christian College. Lyon swept both Wiley and Jarvis Christian. The Greek middle blocker scored 7 points with 5 kills, 2 assists, 2 digs, and 2 blocks.

The season did not start ideally for the University of Wisconsin Green Bay. On August 27th, Green Bay faced the Ball State Cardinals and the match ended 3-1 in favor of the Cardinals. Chounta played in all four sets recording 2 kills, 2 aces, and 3 digs. Sheroli appeared in one set recording 1 kill. The same day the Green Bay phoenixes faced North Dakota State University and the match ended 3-2 in favor of  North Dakota State. Sheroli appeared in 2 sets and recorded 2 aces, while Chounta appeared in all 5 sets and had 1 kill, 1 ace, and 9 digs, for the phoenixes. On August 28th, Green Bay played against St. Thomas and the University of Northern Iowa. The Green Bay Phoenixes had a 3-1 win against St. Thomas. Iro Chounta scored 11 points which came from 8 kills, 5 blocks and 6 digs. The second match of the day ended in favor of Northern Iowa in a 3-1 set loss for the Phoenixes. The Greek players showed action in the majority of the sets. Iro Chounta scored 13 points coming from, 10 kills, 3 aces, and 5 digs. Zoi Sheroli recorded 7 digs and 1 ace.

The University of Miami played against Tarleton State, and the match ended in favor of MU. The Greek middle blocker appeared in 1 out of the 3 sets and recorded 3 kills, 2 assists, and 1 block. On August 29th, the Miami Canes faced UMBC and the match ended in favor of the Canes, with the Greek middle leading in stats with a .833 hitting percentage. Aristea Tontai, had 5 kills, 1 dig and 1 block.

Papazoglou’s Lewis and Clark State College volleyball team recorded 1 loss against Embry-Riddle (2-3) and 1 win against Valley City State (3-0) on August 27th, while also two losses against MSU-Northern (1-3) and Arizona Christian (0-3) on August 28th. The Greek player saw action mostly from the back row for 5 sets, recording a total of 5 digs.

Antypa’s team had a solid season opening weekend, with two wins against USF (3-0) and UMBC (3-2) and one loss against FGCU (0-3). The Greek player saw action mostly from the back row, recording 5 digs.