Taste of Greece in the NCAA Men’s Volleyball Championship! 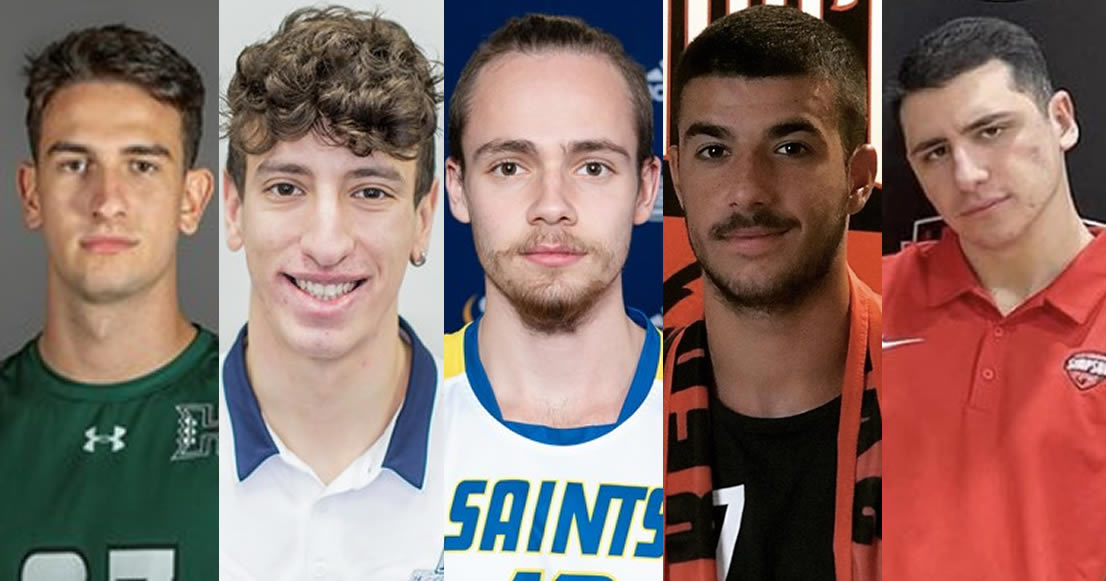 The freshman Spyros Chakas wins the NCAA Men’s Championship with the University of Hawaii!
Kyridis graduates and returns to Greece.
Great seasons for Kagialis, Kalagasidis, and Gitersos.

A magical year for Spyros Chakas has come to an end after his team was named the NCAA men’s volleyball champion for the 2020-2021 season. Following an easy match, the Hawaiian team was able to sweep BYU at the Covelli Center with 25-21. 25-19, 25-16.

The Rainbow Warriors (17-1) were able to make history because they managed to make their fourth national title match appearance after defeating UC Santa Barbara in the semifinals and brought home the university’s first NCAA team title since 1987. This title is also the first in program history… in a way; Hawaii men’s volleyball also won the 2002 national title, with the lead role of that squad played by fellow Greek Theocharidis, three-time national Player of the Year. However, that title and awards were later stripped by the NCAA due to amateurism issues with Theocharidis from Greece.

The freshman Athenian who competed this year for the University of Hawaii, managed to lift the trophy and be crowned National Champion. Even though Spyros was a newcomer to college volleyball, he offered valuable help to his team with 19 kills, 5 assists, 5 aces, 16 digs, and 9 blocks, in 38 sets played. His best performance was against Long Beach on March 3rd where he scored 5 kills, 2 assists, 1 ace, 5 digs, and 4 blocks, in 5 sets. Next year, with the return of sophomore Dimitri Mouchlia, the Rainbow Warriors will try to repeat their triumph.

US higher education, at least as an undergraduate, came to an end for Dimitri Kyridi at Barton College. For the season of 2020-2021, Dimitris participated in 69 sets and 19 matches, scoring 96 kills, 5 assists, 7 aces, 25 digs, and 35.5 blocks with a total of 138.5 points. His best performance this season was against Mount Olive on February 24th with a career high of 11 kills, 1 ace, and a total of 15 points.Other great performances include: As a freshman at Lincoln Memorial University against Erskine, he scored 2 aces, 9 blocks, and 10 points. As a sophomore with the Barton colors, he scored 10 kills against Coker College, 11 points against Limestone, and 8 blocks against Grand Canyon. As a junior, he scored 9 kills and 12.5 total points against St. Francis Brooklyn, and 10 blocks against Loyola Chicago. The Greek middle blocker managed to take his team to the quarterfinals of the Conference Carolinas but were unlucky as they did not get the ticket to the finals after losing 0-3 to King. Finally, it should be noted that Dimitris finished his undergraduate degree and probably college volleyball, unless he chooses to combine his master’s degree with one more year of volleyball as he is eligible to play.

It is fair to say that for the season of 2020-2021, Gitersos did not just participate in some games, but rather was on the starting line up and a key player for his team! He played in 86 of the 88 sets and was the starting setter in all 23 games at Limestone University. More specifically, he had 62 kills, 816 assists, 15 aces, 113 digs, 48 blocks, and a total of 103.5 points. His statistical performance in his sophomore year has doubled from last year: 45 sets last year- participation in 86 this year, 15 kills last year- 62 kills this year, and a tremendous difference between last year’s 337 assists with this year’s 816. Even though it was an unusual season for everyone, Gitersos managed to make the most of it and even had 1 double-double and scored over 50 assists in 2 games! He also had great performances where he broke his personal records. One of them was the match with Saint Francis where he scored 7 kills and 9 points, and of course, his incredible game against Queens on February 4th where he scored 51 assists and 10 digs. Finally in the match against Barton, he broke his last year’s record with 5 blocks! Christos Gitersos will compete for another 2 years in the US until he completes his degree, unless he chooses to use the eligibility given to all student-athletes due to COVID-19 and remain in the States for a 5th year.

An amazing year for the player from Thessaloniki who participated in all 13 games of Simpson University, more specifically in 42 of the 44 sets. The starting setter of the Hawks was trusted by his coaches and was given a lot of playing time. He was a key player in 12 games and proved to everyone why he is the starting setter of his team. In fact, Kalagasidis is the first in aces and assists on his team with an average of 1.9 aces/game and 7.8 assists/set. The sophomore also had a double-double with 28 assists and 11 digs in his game against UC Merced. His best performances were in the following games: in their first game against Pacific Union College with 7 aces, on March 27th against UC Merced with 39 assists, in two games where he scored 4 blocks in total and in the semifinal against UC Merced where he scored 9 kills. Finally, in 2021 Kalagasidis broke all his personal records of 7 kills, 27 assists, 4 aces, and 7 digs from last year!

Following Kalagasidi’s footsteps, the second Greek from Simpson University also participated in all 13 games in 42 of the 44 sets! Michalis Kagialis had an excellent year with great performances where, in combination with the setter of his team (Kalagasidis), they contributed significantly to their victories. In total, Kagialis had 73 kills, 9 assists, 11 aces, ranked 2nd on his team with 30 blocks, 37 digs, and 94 total points. He scored a double-double with 10 kills and 11 digs, while in 3 games he had more than 10 kills. Kagialis, who went to a US University for the first time in January ‘19, graduates in December 2022, and therefore, has one more season to play.