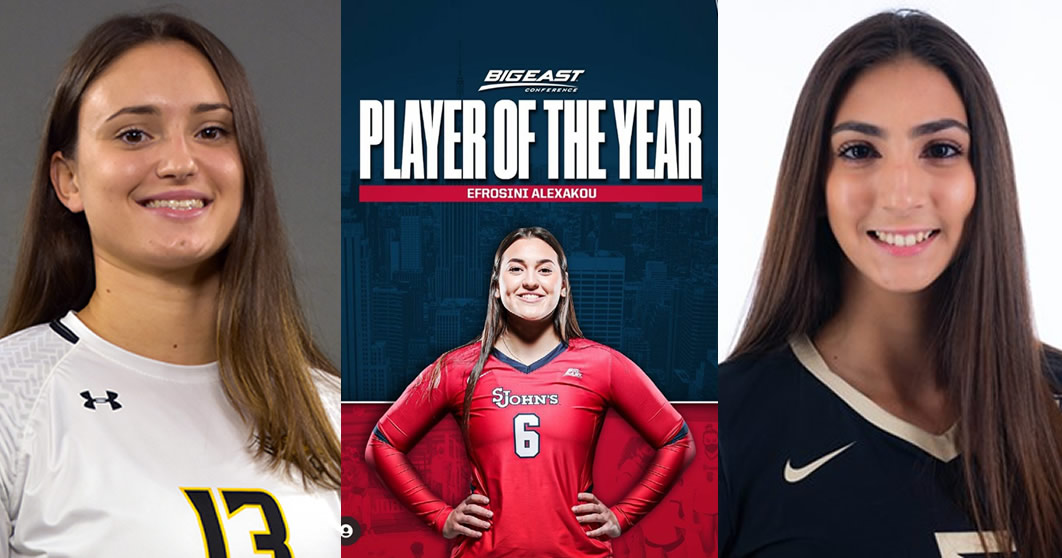 Bakodimou’s Towson University is named the best team in the CAA.
Giourda’s University of Central Florida secured their 3rd straight conference title and started preparing for the NCAA tournament.
Alexakou receives the title of the best player in the Big East. An incredible performance by Mpampiri who scored 15 points.

Fay Bakodimou
Bakodimou’s Towson University was named the CAA volleyball champion for 2020-2021 after sweeping Charleston (3-0) in their first semifinal on the 2nd of March and defeating Northeastern (3-1) the day after. Once again, Bakodimou was one of the athletes who stood out and led Towson to their dream goal. In the semifinal Bakodimou scored 5 kills, 2 blocks, and 12 digs, while in the final with Northeastern she scored 8 kills, 1 assist, and 12 digs. Bakodimou is the first Greek player to celebrate a title with her team for this year and advance to the NCAA D1 championship.

Stella Giourda
The AAC semifinals and finals took place on April 2nd and 3rd. In the semifinals, Giourda’s UCF played against Tulane. After a close game of 5 sets (19-25,25-21,26-24,22-25,15-9), the UCF Knights won, with Giourda making her debut and participation in 3 sets, scoring 3 kills and 1 dig. On April 3rd, the big final took place with a hint of…Greece where Giourda and Papazoglou went head-to-head, competing for first place. After 4 sets (25-20,24-26,25-13,25-20) Giourda’s UCF Knights secured their 3rd straight conference title and are now preparing for the NCAA D1 championship.

Katerina Papazoglou
The AAC semifinals and finals took place on April 2nd and 3rd. In the semifinals, Papazoglou’s Temple played against Houston. The Temple Owls won in 4 sets (18-25,25-23,25-14,25-18) with Papazoglou scoring 7 kills, 4 aces, and 21 digs. It is noteworthy that with this appearance, Papazoglou broke her previous season record of 16 digs. In the final, Papazoglou led her team with 12 kills, 1 block, and 8 digs, but it was not enough to defeat the UCF Knights who were named AAC champions.
Papazoglou ends her career by participating in 95 games and 315 sets. Her best performances were in the following matches:
22 kills as a junior against UConn
22.5 points as a junior against UConn
5 aces as a senior against USF
27 digs as a sophomore against Indiana
4 blocks as a freshman against SMU

Efrosini Alexakou, Ariadni Kathariou
Alexakou’s and Kathariou’s St. John’s reached the finals of the Big East with the best intentions but did not manage to overcome Marquette and suffered a 0-3 defeat in the first semifinal on April 2nd. Alexakou, who was voted amongst the best players of the “All Big East Team” conference was once again the best player of the match with 13 kills, 1 assist, 5 blocks, and 7 digs, while Kathariou was the dominant blocker with 6 in total, 2 kills, and 2 digs. Even though the Red Storm failed to defend their title, they ended this year with their head held high. Creighton returned to their “Big East throne”, beating Marquette 3-1 in the final, winning their 6th title in history.

Marialena Mpampiri
Mpampiri’s Lyon College had two defeats this week. On April 1st, they hosted William Baptist University but were unlucky and lost 1-3. Despite the Greek middle-blocker’s impressive appearance with 14 kills and 2 blocks, Lyon was unable to secure the win. On April 2nd, they faced RV Columbia College but lost in 2 sets, with Mpampiri scoring 1 kill and 2 blocks throughout the game.

Next Obligations:
April 6th vs. Seed

Zoe Faki
April left a sweet taste for Faki’s University of Pittsburgh, following two victories in their last two games. Receiving an April Fool’s Day gift from Clemson, Pitt was able to secure their 11th victory in a row after another sweep (25-18,25-17,25-17). Faki participated in 3 sets and scored 1 ace. Finally, in their last game of the year they got nothing less than what was expected… another 3-0 victory, this time against Virginia Tech. Faki participated in 2 sets, scoring 2 kills. The Panthers ended their season with a perfect 12-0, ranking in 18th place in the nation and 3rd in the ACC, and are now waiting to see which team they will be facing in the NCAA D1 championship.

Lida Kastanou
Kastanou’s Bradley University unfortunately did not make it to the Missouri Valley Conference finals and lost 3-1 to Illinois State (25-13,23-25,27-25,25-10). Bradley, who has been in the semifinals since 2002, ended their season with 12 wins and 7 losses and finished in 4th place. Kastanou did not participate in the semifinal.

Mariana Anastasiadi
Last week the Gulf South Championship semifinals took place in Alabama where the AUM Warhawks met with defeat following their match against Alabama Huntsville (3-1). Anastasiadi’s Auburn University at Montgomery ended their season with a final record of 6 wins and 2 losses and are now focusing on their season next fall. Anastasiadi did not play in the semifinal.

Stauroula Papazoglou
Another victory in the records for Papazoglou’s Odessa College that gave them the ticket to the NJCAA D1 tournament which will take place in Missouri. On March 30th, the No. 2 ranked Odessa Wranglers, faced the No. 18 ranked Hill College, whom they defeated με 3-0 (25-14,25-16,25-16). The freshman did not participate in this game. The tournament will take place on April 15th and the team that will face Odessa will be announced soon.

Elisavet Papageorgiou
Elisavet Papageorgiou’s Eastern Illinois ended their regular season with 2 wins and 14 defeats. On March 28th and 29th they welcomed SIUE for the last time, but luck was not on their side as both games ended 0-3 in favor of SIUE. In both games, the Greek right-side participated in all 3 sets, contributing to her team with 1 dig in the first match.

Nafsika Papavasiliou
One defeat and one victory this week for Papavasiliou’s Mount Olive. On April 1st, they visited Southern Wesleyan University where they won 3-0, with the Greek outside hitter playing throughout the whole game and scoring 5 kills, 1 block and 1 dig. The following day, they visited Converse College but lost 0-3 despite their best efforts. Papavasiliou took part in all three sets, scoring 2 kills and 2 digs.

Georgia Tselepi, Olga Zampati
Unfortunately, with their loss against Canisius on April 1st, Quinnipiac failed to secure a ticket to the MAAC Tournament semifinals. Georgia Tselepi took part in 3 out of the 4 sets, scoring 7 kills, 6 digs, and 1 block. Olga Zampati did not take part in this match. This game marked the end of Quinnipiac’s regular season with a final record of 3 wins and 5 defeats.

Alexandra Drosopoulou
On April 3rd, the final of the Horizon League took place between Drosopoulou’s UIC and Wright State. Unfortunately, UIC was unable to win the 5-set battle against Wright State, thus finishing in 2nd place with 14 wins and 3 losses. Drossopoulou did not play in the final.

Ioanna Charitonidi
Season came to an end for Charitonidi’s UTRGV following their game against Chicago State on April 1st in the semifinals of the WAC conference. Unfortunately, the Vaqueros suffered a 3-0 defeat and a record of 2 wins in 15 games. Charitonidi played as a libero and had high percentages in serve-receive (65% and 50%) and 8 digs, but it was not enough for her team to win. It has been a difficult year due to COVID and injuries which cost the team greatly.

Stella Antypa
Antypa’s Rutgers ended their athletic obligations in the Big10 this season having an unprecedented 6 victories in a very difficult conference. In their last two games on Friday 2nd and Saturday 3rd of April, they defeated Michigan State with 3-2 and 3-1 respectively. The Greek outside hitter contributed to her team in the back row with 1 dig and 1 ace. The women’s volleyball team coach, Caitlin Schweihofer, mentioned that she was very pleased with the way her team handled the pandemic and how her athletes remained healthy. She was also very satisfied with the effort and the thirst for victory that was shown by her athletes. This makes her optimistic about the future.

Elena Baka
Baka continues her beach volleyball obligations ever since April 1st after defeating Stanford with 2-0 (21-18, 21-8). So far Elena and her pair have a 3-0 record, continuing their sand season undefeated.

Spyros Chakas
The University of Hawaii continues their season in the Big West conference where they welcomed their nemesis: Long Beach State, champions of the last two years in men’s college volleyball. Usually, the two teams have ranked 1st and 2nd in the nation in the past few seasons. On the 2nd of April, Chaka’s team managed to secure their victory over Long Beach relatively easy with 3-1, while on Saturday Hawaii managed to overthrow Long Beach after 5 exciting sets (24-26, 32-30, 25-17, 20-25, 15-8), with the Greek outside-hitter offering 8 valuable points (5 kills, 1 ace, 2 assists, 4 blocks, and 5 digs). Chakas led his team to their 11th victory this season, which keeps the University of Hawaii undefeated!

Christos Gitersos
March left a bitter aftertaste for Giterso’s Limestone University following their defeat against Emmanuel College. On March 30th, the Limestone Saints welcomed Emmanuel College and lost 3-0 despite their battle in the last set (25-16,25-15,29-27). Gitersos participated in all 3 sets and scored 3 kills, 25 assists, 1 block, and 2 digs. After this match, LU has 10 wins, 9 defeats, and only 2 games before the IVA championship.

Next Obligations:
April 9th vs. Queens

Dimitris Kyridis
Kyridi’s Barton College was able to steal the victory over Erskine on April 3rd following 5 strong sets. The Greek middle-blocker, in yet another great performance, scored 8 kills, 2 blocks, and 1 ace.

Michalis Kagialis, Nikos Kalagasidis
With one more defeat, Kagialis and Kalagasidis end their obligations for this season. On April 1st, they faced the University of California at Merced and lost with 3-0 (25-18,25-20,25-0). Kagialis participated in 3 sets and managed to obtain his first double-double with 11 kills and 10 digs, while Kalagasidis scored 2 kills, 28 assists, 3 blocks, and 11 digs. The SU Redhawks ranked 3rd with 6 wins and 6 losses and are now preparing for the California Pacific Conference.