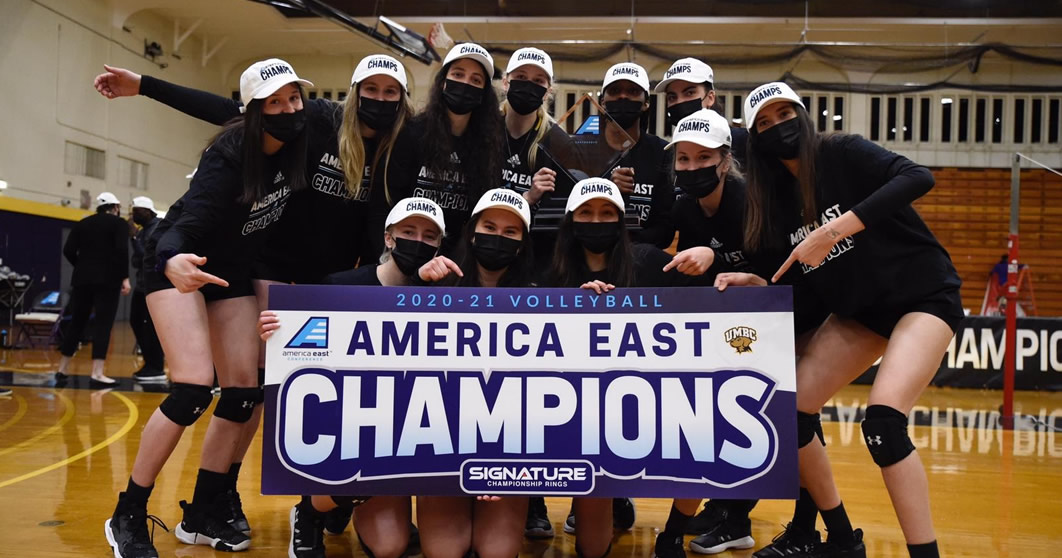 Highlights
UMBC defeated their rival UAlbany in a dramatic final of the America East Championship Tournament and became the 2020-2021 season America East Champions, earning an automatic bid to the NCAA Tournament. Freshman Beste Ayhan helped with 6 kills, 8 blocks and a dig for the win. Bradley and UTEP were eliminated in the semifinals of their conference tournaments. Doga Topcicek and Hande Yetis took part in the games. Hande Yetis finished with 21 assists, 1 ace and a dig; Doga Topcicek finished with 9 kills, 3 assists, 1 ace, 2 digs and a block.  UTRGV’s freshman outside hitter Ada Bulgur has been named a member of the WAC All-Freshman Team!

UMBC is the 2020-2021 season America East Champions!
UMBC defeated the last champion UAlbany in five sets (23-25, 25-23, 21-25, 25-22, 15-13) for its first America East Championship in program history. With the win, UMBC (11-3, 9-3 AE) clinched its first NCAA Tournament berth since 1998, when the team won the NEC conference crown. The Retrievers were one of the youngest teams in the nation, with a roster that featured seven underclassmen, including five freshmen, and was picked to finish fifth out of seven teams in the preseason poll. UMBC, however, won a share of its first ever America East regular season title after going 10-3 overall and 9-3 in conference. Freshman middle blocker Beste Ayhan recorded 6 kills, 8 blocks and a dig. The team will find out who it will play in the NCAA Tournament during the selection show at 4 p.m. on Sunday on ESPNU. The NCAA tournament first round begins on April 14 in Omaha, Nebraska. Also, four Retrievers were named to the All-Conference Team as Darina Kumanova and Aysia Miller were named Rookie and Setter of the Year, Anouk Van Noord was selected on the All-Conference team as the leader in kills, while Cristina Robertson led the coaching staff of the year.

Bradley advances to semifinals and is eliminated on the second day of the MVC Volleyball Championship
The MVC Conference canceled the second quarterfinal match of the 2021 MVC Volleyball Tournament due to Covid-19 protocols within Valparaiso’s Tier 1 personnel, which consists of student-athletes, coaches, managers and staff. As a result, Bradley got to play against top-seeded Illinois State.
Bradley fell on the second day of the MVC Volleyball Championship with set scores of 25-13, 23-25, 27-25, 25-10, Friday afternoon at Redbird Arena. Bradley made their first MVC Tournament semifinal appearance since 2002. Freshman outside hitter Doga Topcicek recorded 9 kills, 3 assists, 1 ace, 2 digs and a block. Junior Hannah Thompson notched her 1000th career kills and 1400 digs becoming the 13th player in MVC history to achieve such an accomplishment.
With the victory Illinois State advanced to Saturday’s championship match, where the Redbirds got to defend their MVC title against the Loyola Ramblers. Subsequently, Illinois State prevailed and will be dancing in the NCAA Tournament once again.

UTEP Volleyball earned a USA Tournament seed for the first time in 13 years!
UTEP Volleyball swept Marshall Volleyball in straight sets, 3-0 (25-22, 27-25, 25-19), in the Conference USA Tournament Quarterfinals Thursday afternoon, for the program’s first postseason victory since 2008. Freshman setter Hande Yetis finished with 21 assists, 1 ace and a dig. She finished the set with a match-best .667 assist percentage.
"(Yetis and Fritsche) deserve so much praise for what they're doing," head coach Wallis said. "I know our players love them to death. But our setters were marvelous." UTEP topped its season-best set kill total with 21 in the final frame.
UTEP volleyball looks to continue to #KeepMakingHistory tomorrow at 11 a.m. MT in the Reed Green Coliseum in search of its first victory over a ranked opponent in program history in (1E) No. 19 Western Kentucky and its first berth into the final round of a conference tournament since 1984 when the Miners were in the Oil Country Athletic Conference.

UTEP Volleyball Falling to no 19 Western Kentucky
UTEP Volleyball Falling to no 19 Western Kentucky with set scores of 13-25, 9-25, 11-25 in the Conference USA Tournament Semifinals in Hattiesburg, Ms. Freshman setter Hande Yetis finished with 8 assists, 1 ace, and a dig.
"Our city is proud of our program," head coach Ben Wallis said. "The one thing that you can say about a city like El Paso is that once (it sees) somebody is showing progress, and that they want to win and our competitive, people are going to come out and support you. He also added “A top-20 team that has weapons exposed us today with our inexperience,"
Western Kentucky also out-dug the miners 38-to-15.

UTRGV Falling in the Quarterfinals!
Fourth-seeded UTRGV Vaqueros volleyball team fell to the fifth-seeded Chicago State Cougars 0-3 (17-25, 21-25, 22-25) in the Western Athletic Conference (WAC) Tournament Quarterfinals on Thursday at Lockhart Arena. Freshman outside Ada Bulgur finished with 1 kill. The Cougars served a season-high nine aces in the onslaught, also hitting a season-best .273. "This is a huge win for our program and our university," Chicago State’s head coach Tanio Trifonov said. "I'm extremely proud of the fight and heart our team showed. It's the first time in program history Chicago State is in this tournament, so we're thrilled to make it to the semifinals." Chicago State's win marked its first of the season in its WAC Tournament debut.