Kathariou is Big East’s Defensive Player of the Week 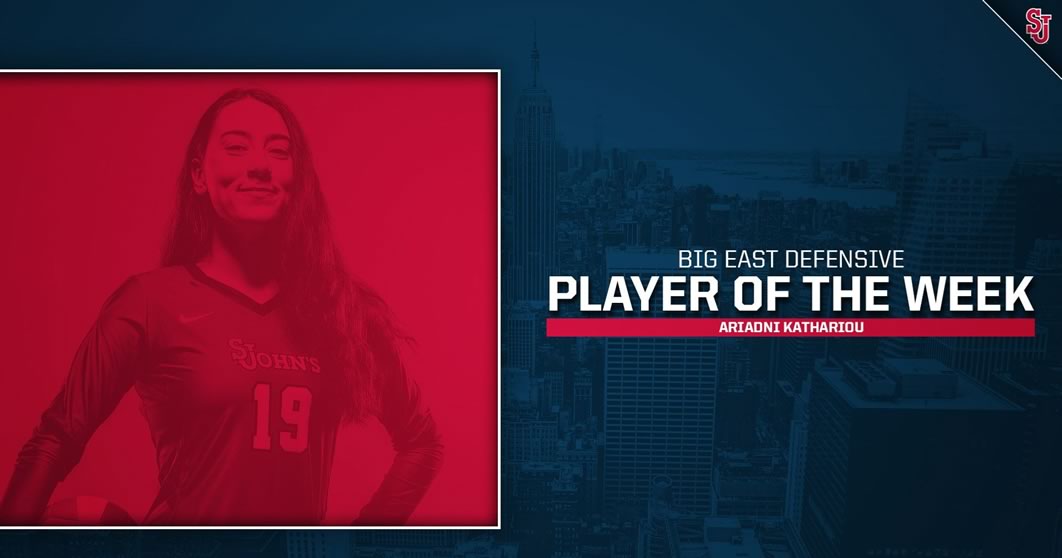 Due to her excellent performance in the St. John’s Red Storm last few victories, Kathariou was named the Big East Conference best defender for the second time this season!

Baka ends her season having played in all games without coming out in a single set. She is ranked in first place as the top scorer in her team with 194 kills this year.

Efrosini Alexakou, Ariadni Kathariou
Securing their 5th consecutive win in the Big East conference, St. John’s eliminated Villanova (3-0) on Tuesday March 23rd. The Greek players, once again, contributed immensely to this victory. This resulted in the Red Storm finishing first for their regular season in the Big East, giving them a great boost for the upcoming finals of their championship. For the second time this year, Ariadni Kathariou was named the best blocker in the region, receiving the title “Big East Defensive Player of the Week”. More specifically, in her two games against Providence, which took place one week ago, Kathariou scored a total of 20 points and 13 blocks. In her game against Villanova, she scored 9 points, 7 of which were kills, 1 ace, and 2 blocks, while Alexakou scored 15.5 points with 14 kills, 1 ace, 1 block, and 8 digs.

Elena Baka
St Mary’s indoor volleyball obligations come to an end following two defeats (3-0) from the number one ranked team in the WCC conference: BYU. For the fourth game in a row, Baka has an average of approximately 15 kills and 10 digs per game, confirming that she is one of the best players in her conference. To be exact, in her first match against BYU on the 26th of March, she scored 14.5 points (14 kills, 2 assists, 1 block, and 11 digs) while in their second game on the next day, she scored 16 points (12 kills, 4 assists, 3 aces, 2 blocks, and 6 digs). Baka’s beach volleyball season will be continued on the 1st of April.

Elena Karakasi
With only two games before the end of season, Karakasi’s Syracuse balanced its record with 7 defeats and 7 wins, two of which were added last week. The first win came against Wake Forest on the 26th of March with an easy 3-0 (25-16,25-16,25-20). The junior had 20 assists and 5 digs in 3 sets. Their second win came two days later against mighty Duke in 5 long sets: 3-2 (19-25, 25-18,25-17,15-25,15-12). Even with one hand due to injury, Karakasi was able to collect 22 assists and 5 digs. Elena’s leadership, however, is irreplaceable according to her coach, Leonid Yelin, deploying her in the game in the most critical moments of every match.

Next Obligations for Tontai:
April 2nd vs. Louisville
April 4th vs. Miami

Next Obligations for Faki:
April 1st vs. Clemson
April 2nd vs. Virginia Tech

Lydia Adam
A difficult week for Adam’s NC State finally comes to an end following two defeats against Georgia Tech and Louisville. On the 27th, the NC State Wolfpack stood weak against Georgia Tech and suffered a 3-0 defeat (25-20,25-21,25-22). Adam participated in 1 set without scoring any points. On the 28th they fell to Louisville with 3-0 (26-24,25-22, 25-13), without Adam participating. The Herd’s record following these games is now 8-8.

Dimitra Tziarli-Katerina Papazoglou
Another Civil War took place last week between Tziarli and Papazoglou. Papazoglou’s Temple University hosted Tziarli’s University of Cincinnati one week before the semifinals of the American Athletic Conference. It is noteworthy that Temple won both days, 3-1 and 3-2. On the 26th of March, Papazoglou had yet another double-double with 12 kills, 16 digs, 1 assist, 1 ace, and 1 block, while Tziarli participated in all 4 sets without scoring any points. On the 27th, Papazoglou with another great performance, scored 11 kills, 1 assist, 3 blocks, and 7 digs while Tziarli contributed to her team with 3 blocks. Following these games, Temple was able to rank in 2nd place (10-5) and will have to face Houston in next week’s semifinals. On the other hand, Cincinnati’s obligations came to an end, finishing in 3rd place (6-7).

Stella Giourda
The University of Central Florida’s, last year’s AAC champs earned their 13th and 14th victories in 15 games last weekend and are now preparing for the AAC semifinals. On the 26th and 27th they hosted the University of South Florida and with two easy sweeps (3-0) managed to climb to 1st place. Giourda did not play in these games. The UCF Knights were named Eastern Conference champions of the AAC and maintained their perfect, undefeated record in their conference.

Next Obligations:
April 1st vs. Valparaiso for the MVC Championship
April 3rd vs. Illinois State or Indiana State

Mariana Anastasiadi
Anastasiadi’s Auburn University at Montgomery is on its way to the semifinals! AUM secured an essential victory last week against Valdosta State (3-0) that gave AUM the golden ticket to the finals of the Gulf South Conference! The freshman did not participate in these games. The AUM Warhawks will face No. 1 in Group A of GSC Alabama Huntsville on March 31st.

Next Obligations:
March 31st vs. Alabama Huntsville for the GSC Semifinals

Stauroula Papazoglou
Papazoglou’s Odessa College is named WJCAC 2020-2021 Champions! Following great performances and two 3-0 victories against Western Texas College and New Mexico Military Institute, the Odessa Wranglers managed to lift the trophy for the second year in a row. Papazoglou played in both games, scoring 2 kills and 5 digs in 2 sets in the first game and no points in the second.

Next Obligations:
April 1st vs. Chicago State for the WAC tournament

Nafsika Papavasiliou
Papavasiliou’s Mount Olive came back strong following 18 days of absence by securing 2 wins. On the 24th of March, they welcomed Chowan University and managed to win 3-0 due to their great performance. The Greek outside-hitter scored 6 kills, 2 digs, 3 blocks, and 1 assist. On March 27th, Mount Olive obtained another easy win over Belmont Abbey College. Papavasiliou participated in this game too scoring 3 kills and 1 block. The match against North Greenville University on March 27th has been postponed.

Iro Chounta, Zoe Serolli
Chounta’s and Sherolli’s Green Bay ended their regular season with two very heavy defeats and a final record of 4-12. On March 22nd, they visited the undefeated Wright State and lost 0-3. Chounta participated in all 3 sets and had outstanding performance with 9 kills, 11 digs, and 1 ace, while Sherolli played in one set and had 1 assist and 1 dig. Despite the battle that Green Bay gave to win the second game, the match ended with 0-3 in favor of Wright State. Chounta scored 9 kills, 8 digs, 2 blocks, and 1 ace, while Sherolli had 4 kills, 4 digs, and 1 assist.

Elisavet Papageorgiou
Two more defeats this week for Papageorgiou’s Eastern Illinois. On March 21st and 22nd they visited Southeast Missouri, however, they were not lucky as both games ended in 0-3 in favor of the home team. Papageorgiou played in both games, contributing to her team with 4 digs in the first match and 2 digs in the second.

Next Obligations:
March 28th and 29th vs. SIUE

Alexandra Drosopoulou
On March 22nd, Drossopoulou’s UIC visited IUPUI, and managed to get two very important wins (3-0). On March 28th, against No. 3 Northern Kentucky in the semi final phase of the Horizon Conference, UIC managed to overpower UIPUI and “steal” the game out of their hands in 5 very impressive sets. This win unlocked a spot for them in the Horizon League Championship for the first time since 2012. The Greek outside-hitter did not take part in these games.

Eva Athanasiadou
Athanasiadou’s athletic obligations came to an end after suffering two defeats. On March 26th and 27th, SLU visited Dayton but failed to obtain a win, with the games ending 0-3 and 2-3 in favor of Dayton. The Greek setter did not take part in these games.

Chrysanthi Stamatiou
Unfortunately, Stamatiou’s Bellarmine failed to get their revenge as they suffered another defeat against Lipscomb University in the quarterfinals of the ASUM conference. The Greek outside-hitter played in 2 of the 3 sets, scoring 1 kill and 6 digs.

Marialena Mpampiri
Mpampiri’s season continues with two defeats and one victory. On the 26th of March, Lyon visited Missouri Baptist University where they suffered a 0-3 defeat, with the Greek middle-blocker playing throughout the entire match and scoring 1 kill, 1 assist, and 1 block. Next, followed 2 games against UHSP and Harris-Stowe State University, with the first ending in favor of UHSP after 5 controversial sets. The Greek middle-blocker had a great appearance and scored 6 kills, 4 digs, 3 blocks, and 1 assist. The second game found Lyon very well prepared as they easily prevailed 3-0 over Harris-Stowe State with Mpampiri having yet another outstanding performance scoring 5 kills, 4 digs, 3 blocks, and 1 ace.

Anastasia Galanou
Galanou’s Villanova University ended its regular season with 3 defeats and a final record of 4-6, having to face a total of 3 other Greek players! On the 23rd of March Villanova traveled to New York where they got defeated (0-3) by Alexakou’s and Kathariou’s St John’s. The game against La Salle on the 24th of March got canceled. However, on the 26th and 27th, Villanova faced Leontaridou’s Providence who they lost to in both games with 2-3. Galanou did not participate in these games.

Elena Leontaridou
Two very impressive victories mark the end of Providence’s regular championship. It is noteworthy that 5 of the 7 victories that Leontaridou’s Providence has obtained this year have been against teams in the Big East conference. On March 26th and 27th, Providence hosted Villanova and was able to win both days 3-2. As a result, Providence will make an appearance, for the 15th time, in the finals of the Big East,and their first since 1999. Leontaridou had a minor injury and did not play in hopes of returning even stronger for next week’s finals.

Stella Antypa
Antypa’s Rutgers University had two wins against Maryland on March 24th and 27th with the same score (3-1) in both games. It is important to mention that Rutgers have two more games before the end of the regular season for the Big 10 championship, and have a score of 4-14. Antypa participated in 2 out of the 8 sets from these past few days, contributing in the back zone and having 1 ace.

Next Obligations:
April 2nd and 3rd vs. Michigan State

Fay Bakodimou
All 3 scheduled games for Towson against the University of Delaware (26/3 και 27/3) and West Virginia (30/3) got canceled.

Next Obligations:
April 2nd and 3rd  finals of CAA conference

Georgia Tselepi, Olga Zampati
On March 28th, Fairfield hosted Zampati’s and Tselepi’s Quinnipiac in a double match with the first one ending 2-3 in favor of Fairfield who was ranked No. 1 in RPI rankings last week. The Greek outside-hitters took part in the second match which ended in favor of Quinnipiac (3-2), with Tselepi scoring 13 kills, 3 digs, 3 aces, 1 assist, and 1 block, and Zampati scoring 3 kills and 3 digs in 2 sets.

Dimitris Kiridis
Kiridi’s Barton welcomed Belton Abbey this week on March 27th and managed to secure a 3-1 win. The Greek middle, in yet another great performance, scored 6 kills, 3 blocks, 3 digs, and 1 ace. The game that was supposed to take place on March 26th against North Greenville is cancelled.

Michalis Kagialis, Nikos Kalagasidis
Simpson University (6-4) fell to University of California at Merced and lost their winning streak. The derby ended in 5 very close sets (21-25,25-19,17-25,25-22,15-8) with both teams offering an excellent spectacle to the spectators who were watching. Both Kagialis and Kalagasidis were starters in this game but despite their great performance, they could not give their team a victory. Kagialis scored 5 kills, 2 assists, 4 digs, and 3 blocks, while Kalagasidis had 5 kills, 39 assists, 1 ace, 6 digs, and 4 blocks.

Next Obligations:
April 1st vs University of California at Merced

Next Obligations:
April 1st vs University of California at Merced

Next Obligations:
March 30th vs. Emmanuel

Spyros Hakas
Haka’s University of Hawaii in the Big West continues its winning streak, and with two 3-1 and 3-0 wins against UC San Diego, reaches a 9-0 record. The Greek outside-hitter played in both games and contributed to his team with 1 ace.

Next Obligations:
April 2ns and 3rd vs. Long Beach State