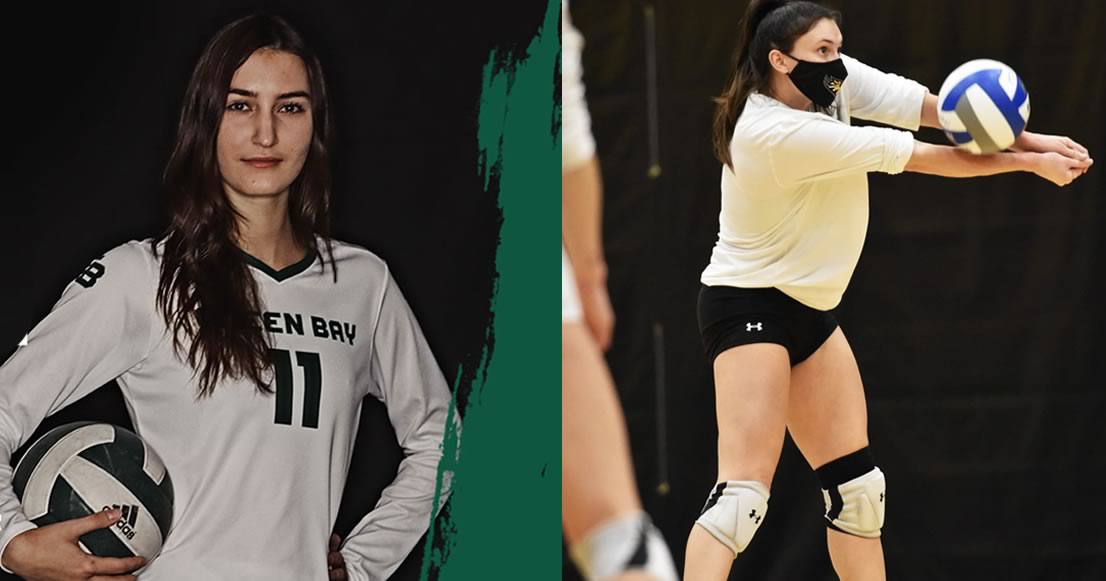 Sherolli will just not let the ball touch the ground! Green Bay had two matches this past week with Sherolli reaching double digits in digs, with 13 digs in the first match, and setting a new record in the second match with 22 digs!
Season opener for Towson University brought an easy victory for Bakodimou who broke her personal record with 9 kills and 10 digs.

Iro Chounta-Zoe Sherolli
A very strong week for Iro’s and Zoe’s Green Bay with a defeat (1-3) and a victory (3-2) against Northern Kentucky. In their first match, despite Zoe’s amazing performance (1 ace and 13 digs), Green Bay fell to Northern Kentucky. However, in their second match, after 5 very dramatic sets, they finally managed to beat Northern Kentucky with Sherolli recording another incredible performance after scoring 3 aces and 22 digs! Chounta played in 3 of the 9 sets.

Next obligations:
February 22nd and 23rd vs. Oakland

Fay Bakodimou
Following 442 long days of inactivity, Bakodimou’s Towson started the year on a great note with a home sweep (3-0) against Stony Brook. The Greek outside hitter contributed to her team with 11.5 points (9 kills, 4 blocks, and 10 digs).

Next obligations:
February 27th vs. Temple

Elena Baka
February 14th and 15th were two very challenging days for Baka’s St. Mary’s College at Gonzaga University. In the first match, despite the Greek outside hitter’s amazing appearance, Baka’s team was defeated (1-3) with Baka scoring 16 points (13 kills, 3 blocks, and 13 digs). However, in their next game the Gaels were determined to win and so they did. Once again, led by Baka who scored 12 points (8 kills, 4 aces, and 14 digs), after 5 long sets they managed to prevail with the final score being 15-13 in favor of St Mary’s College.

Next obligations:
February 23rd and 24th vs. Portland

Christos Gitersos
Another home victory was secured by Giterso’s Limestone University (4-4) against Erskine University. The match ended in 3 sets (25-21, 25-18, 25-16) with the Greek setter playing as a starter once again this week. Gitersos managed to score 4 kills, 31 assists, 2 aces, 5 blocks, and 2 digs. The Limestone Saints had a scheduled match on 02/17 against King University which got postponed.

Next obligations:
February 22nd vs. University of Rhode Island

Elisavet Papageorgiou
On February 14th, Eastern Illinois faced Tennessee Tech in a double match ending in two defeats (1-3 and 0-3) for Papageorgiou’s team. The freshman right-side played in both games scoring 3 kills, 5 digs, and 3 aces in total.

Next obligations:
February 21st and 22nd vs. UT Martin

Markella Lanara
Another tough week for Lanara’s George Washington after suffering 2 defeats against La Salle. The first game on Friday night ended in 5 sets, with the Greek middle-blocker scoring 3 kills, 1 ace, 0.5 blocks, and 11 digs. The former Olympiakos middle was able to tie the thrilling tie break at 14-14; with consistency both offensively and defensively she almost delivered a W for GW. The two teams met again in less than 24 hours for their second match, with La Salle prevailing once again with 0-3 despite Markella’s contribution of 4 kills, 2 assists, 2 blocks, and 1 dig.

Aristea Tontai
Tontai’s North Carolina University at Chapel Hill restarted their season on a very positive note. On February 18th they welcomed Appalachian State University whom they defeated in 3 clean sets (25-15, 25-14, 25-13). The senior played in 2 sets and had 2 kills, 1 ace, and 1 block.

Stavroula Papazoglou
Papazoglou’s Odessa continues to secure one victory after the other after 2 easy wins against Frank Phillips College (25-13, 25-12, 25-16) and Western Texas College (25-8, 25-20, 25-8). The Greek outside hitter played in one set against Frank Phillips and contributed to her team with 3 digs. It is noteworthy that the Odessa Wranglers have only suffered 2 defeats this season and are ranked 5th overall in NJCAA D1, with an excellent 13:2 (wins to defeats) ratio.

Next obligations:
February 21st and 22nd vs. University of Evansville

Eva Athanasiadou
Three more wins secured for Athanasiadou’s Saint Louis University against Davidson (3-0, 3-1, 3-0). The Greek setter did not play in any of these games.

Stella Antypa
Antypa’s Rutgers fought bravely in an “away” match against Iowa. Even though in their first game on Friday they lost 3-1, they came back determined 24 hours later and managed to upset Iowa after 5 close sets. The Greek freshman only played in Friday’s game contributing to defense.

Next obligations:
February 26th and 27th vs. Ohio State

Efrosini Alexakou- Ariadni Kathariou
All 3 of St John’s matches against Villanova, scheduled on February 15th, 18th, and 19th, were canceled due to COVID.

Next obligations:
February 25th and 26th vs. University of Connecticut

Anastasia Galanou
Villanova’s games against St. John’s, Delaware, and Providence were postponed due to COVID.

Next obligations:
March 2nd vs. Delaware

Ioanna Charitonidi
The Texas Showdown between UTRGV and Texas A&M-Corpus Christi did not take place due to bad weather conditions.

Next obligations:
February 22nd and 23rd vs. Grand Canyon

Marialena Mpampiri
Thursday’s game against Bethel University was postponed due to bad weather conditions. The match will take place on the 16th of March.