Balkan Wars in ACC - Ioanna leading the US in 3s 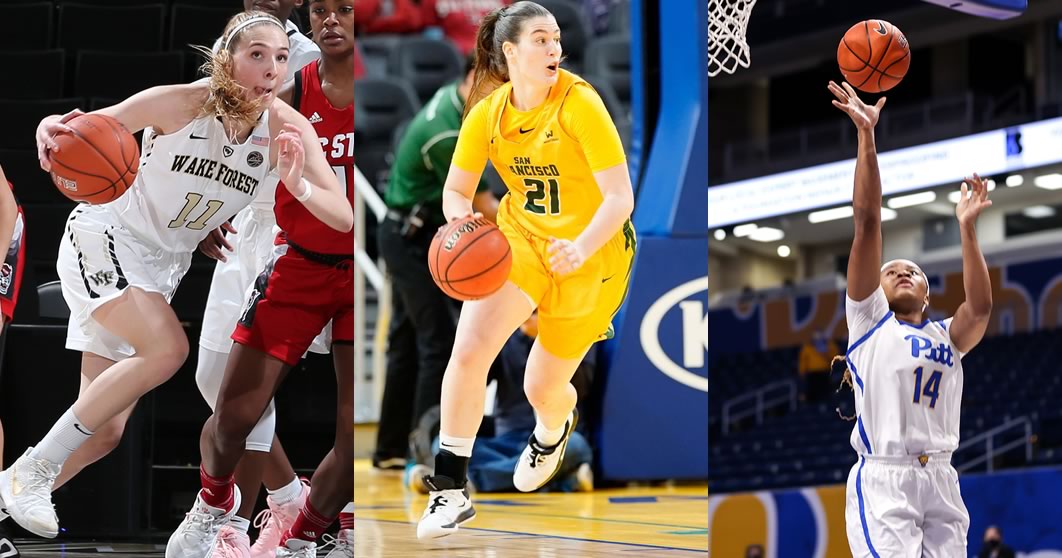 Ioanna Krimili continues her great performances in the month of February. She received her 9th Freshman of the Week award in 12 weeks for the West Coast Conference, where she's leading her Dons to new heights, having won 7 out of their last 8 games. She contributed to her team’s important victory on Valentine’s Day vs Portland by having 16 points, 3 rebounds, 1 steal, shooting 6-12 from the field, and making 4/8 3pt shots in 38 minutes of action. She is currently averaging 18.2 points per game going along with 3.4 rebounds while shooting 44.2 % from the 3pt line. Ioanna's battle for the top spot in the country in 3pters made is one for the ages. She's still #1 in the nation, while hot on her heels is the senior from Virginia Tech, Aisha Sheppard, who's taken 28 more 3pt shots than Ioanna.

Ivana Raca of Wake Forest University, who recently became the 28th member of the 1000-point club in school history, while ranking 26th in program history with 1,065 career points, contributed significantly with a huge double-double performance with 14 points, 11 rebounds and 2 blocks in 40’ minutes of action on February 11th in a 64-61 OT win vs Pittsburgh of Greeks Cynthia Ezeja and Ismini Prapa. Cynthia Ezeja was on the court for 22 minutes and had 5 rebounds, 4 points and 2 blocks while shooting 2/3 from the field. On February 14th, when Wake Forest faced Clemson University, Ivana Raca had 20 points, 5 rebounds and 1 block while shooting 9/16 from the field and 2/4 from the 3 point line and helped her team lead to a 72-65 victory.

Elena Pilakouta continued where she left off last week and had two double digit scoring games vs the University of Missouri in Kansas City. More specifically, she scored 13 points going 5/7 from the field and had 3 rebounds and 1 assist in 21 minutes of action in a 59-69 team loss on February 12th. The next day when the two teams faced each other again, she saw 20 minutes of action and was 2 rebounds shy of a double-double by having 10 points and 8 rebounds while shooting 6/7 FTs on a team 66-76 loss.

Greek teammates of Northeastern Community College Filippa Goula and Lia Gkompetzisvili are having important roles at their school and both are having some great performances. More specifically, Filippa Goula on February 12th vs Western Wyoming College had 17 points, 5 rebounds, 4 steals and 2 assists while shooting 2/4 from the 3 pt line and 7/8 from the FT line and helped her team to a 67-60 win. On the other side, Lia had 12 points, 6 rebounds, 2 assists and 1 steal on February 9 vs Laramie County CC on a 62-75 loss. Lia has competed in 2 games and is currently averaging 8.3 points and 4 rebounds per game in 15.3 minutes per game while Filippa Goula is averaging 11.3 points, 3.5 rebounds and 3 assists per game while being a starting point guard all 6 games this season.