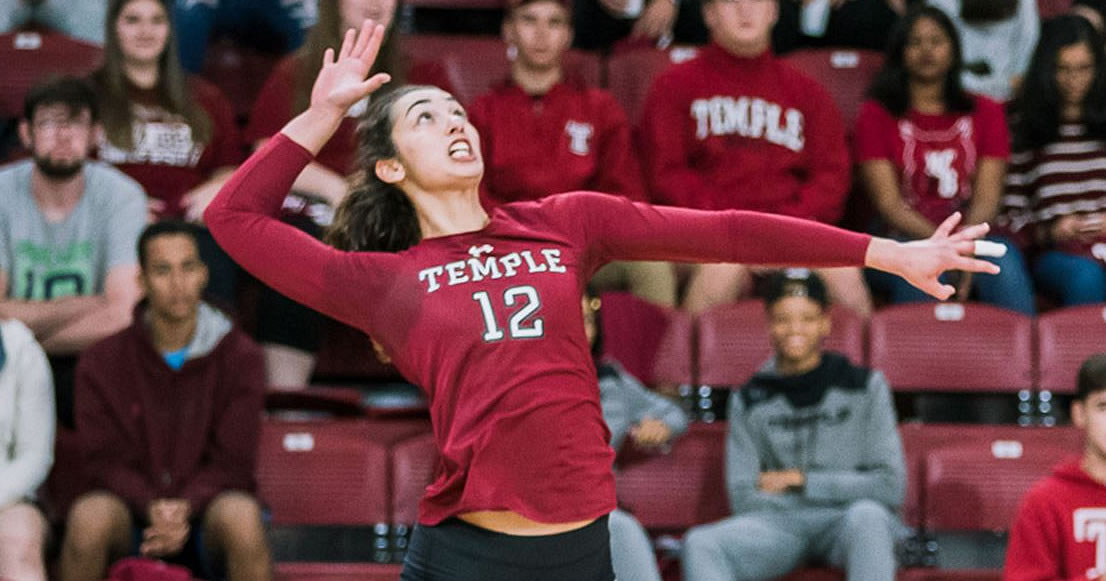 Katerina Papazoglou and Temple University premiered with the Greek senior being “on fire” on the service line with 5 aces. The dynamic duo, Alexakou-Kathariou had a great weekend at St. John’s after Saturday’s sweep over Sacred Heart University (3-0). Alexakou led her team with 17 points, 16 kills, 2 blocks, and 6 digs, while Kathariou hosted a “block-party” attaining 7 blocks and 4 kills. Valentine’s Day, however, challenged St. John’s after it took them 5 sets to break Stony Brook University’s resistance and wrap up their two-match home-stand. With Kathariou building walls for St. John’s block and Alexakou’s mighty swings, they managed to capture the 5th set with 15-11 bringing the Red Storm to raging celebrations. Alexakou ended the game with 14 kills, 1 block, and 13 digs while Kathariou was named the best blocker for both teams with 8 blocks, 7 kills, and 1 ace.

Katerina Papazoglou
Katerina Papazoglou’s Temple University suffered its first defeat for this season. The Temple Owls faced the University of South Florida twice on February 12th and 13th. In their first match, they suffered a defeat after 5 dramatic sets (22-25, 25-21, 25-6, 24-26, 15-17). The Greek senior made an amazing first appearance for 2021. She participated in 4 sets and contributed to her team with 16.5 points, 11 kills with 35% efficiency, 1 block, 11 digs, and 5 aces. More specifically, in the 3rd set which was won with great ease, Papazoglou made a great start with 3 aces in the first 5 points of the set. Impressively, she began the set in the serving position and finished the set from the service position too. Despite their first defeat, they came back on the next day determined to win and so they did, securing their 5th win (3-1). Papazoglou was a starter in this game too and participated in all 4 sets, scoring 9 kills, 1 assist, and 5 digs.

Next obligations:
February 18th and 19th vs. University of Central Florida

Efrosini Alexakou and Ariadni Kathariou
Alexakou’s and Kathariou’s St John’s showed absolute dominance in their game against Sacred Heart University. For the third game in a row, Alexakou managed to score more than 13 kills while Kathariou turned into a human wall blocking every ball in sight. St John’s managed to crush Sacred Heart University in 3 sets (25-17, 25-13, 25-18) with Alexakou contributing 17 points to her team, 16 kills, 2 blocks, 6 digs, and 1 assist, and Kathariou scoring 8.5 points, 7 blocks and 4 kills.

Next obligations:
February 14th and 15th vs. Gonzaga

Markella Lanara
A tough start to the week after Lanara’s George Washington fell to George Mason in 5 sets, followed by a hard-fought victory against Howard in 5 sets, found Lanara participating in both games. More specifically, the freshman middle-blocker scored 4 kills, 2 aces, 3 digs, and 5 blocks overall. It is noteworthy that in her first match she almost scored the last point giving George Washington the victory they were desiring. However, a last-minute dig saved George Mason who prevailed 16-14 in the tie-break, securing their win over Lanara’s George Washington. In her next match though, Markella put up a huge block in the most pivotal play of the tie break, to lead her George Washington teammates to victory 15-11. The game on February 14th against Virginia Commonwealth University was postponed.

Next obligations:
February 19th and 20th vs. La Salle

Ioanna Charitonidi
Ioanna Charitonidi’s UTRGV continued their losing streak as they did not manage to pull off the upset and beat the number 1 ranked team in the WAC, New Mexico State. As a result, UTRGV suffered two home sweeps (0-3). Charitonidi had 63% in serve-receive, 3 digs, and 1 ace on their first game, while in the second game she had 80% in serve-receive and 3 digs. Their game against Texas A&M Corpus Christi on February 16th got postponed.

Next obligations:
February 22nd and 23rd vs. GCU

Iro Chounta and Zoe Seroli
Chounta’s and Seroli’s Green Bay suffered two defeats this week against Milwaukee (0-3, 2-3). Chounta took part in 4 sets and had 1 kill, 1 ace, 3 blocks, and 4 digs, whereas Seroli did not play in these games.

Next obligations:
February 15th and 16th vs. Northern Kentucky

Stella Antypa
Fourth-ranked overall in NCAA D1, the legendary Nebraska team, hosted Antypa’s Rutgers University on February 12th and 13th. Rutgers failed to do the unexpected and fell to Nebraska (3-0, 3-1). It is noteworthy that this was the first set that Rutgers ever won against the mighty Nebraska of the Big 10 Conference. Antypa participated in 4 sets and had 3 digs and 1 assist.

Next obligations:
February 19th and 20th vs. Iowa

Chrysanthi Stamatiou
Stamatiou’s university was dealt 2 defeats this week against Kennesaw State University (0-3, 1-3). The Greek outside-hitter played in both games scoring a total of 16 kills, 2 aces, 10 digs, and 1.5 blocks.

Next obligations:
February 20th vs. Davidson

Stella Giourda
Another easy victory for Stella Giourda’s University of Central Florida (6-0) over Jacksonville University on February 9th. The Knights prevailed with 3-0 (25-23, 25-9, 25-17) and thus added another victory to their streak. Giourda participated in 1 set and scored 2 kills.

Next obligations:
February 18th and 19th vs. Temple University

Dimitra Tziarli
A great week for Cincinnati University (4-2) and for Tziarli comes to an end after two victories over East Carolina University. On February 11th, Cincinnati managed to secure their win after 4 very close sets (25-21, 24-26, 27-25, 25-23), and sweep their opponent on February 12th after 3 strong sets (25-23, 25-23, 30-28). Tziarli participated in one set in the first match without making any points and did not take part in the second game. It is worth mentioning that Cincinnati University is ranked No. 1 in the Eastern Division  of the American Athletic Conference.

Anastasia Galanou- Zoe Faki
This season for Galanou’s Villanova began with a difficult victory of 5 sets over Coppin State University. Galanou did not participate in this game.

In their second game, Villanova could not protect their home against Faki’s Pittsburgh and therefore suffered a 0-3 defeat. Faki played for one set without scoring any points while Galanou did not take part in this game.

Next obligations for Galanou:
February 19th and 20th vs. St. John’s University

Next obligations for Faki:
March 6th vs. Villanova

Next obligations:
February 14th and 15th vs. Indiana State University

Alexandra Drosopoulou
Two more wins in the books for Drosopoulous’s UIC against Youngstown State. The senior outside-hitter did not take part in either of the two matches.

Next obligations:
February 22nd and 23rd vs. Milwaukee

Marialena Mpampiri
Mpampiri’s Lyon College dropped their season opener (0-3) against Cumberland University but came back with a sweep against Philander Smith College (3-1). The junior middle-blocker made a great debut, starting in both games and scoring 10 kills, 2 aces, 4 blocks, and 1 dig. The match against Bethel University has been postponed.