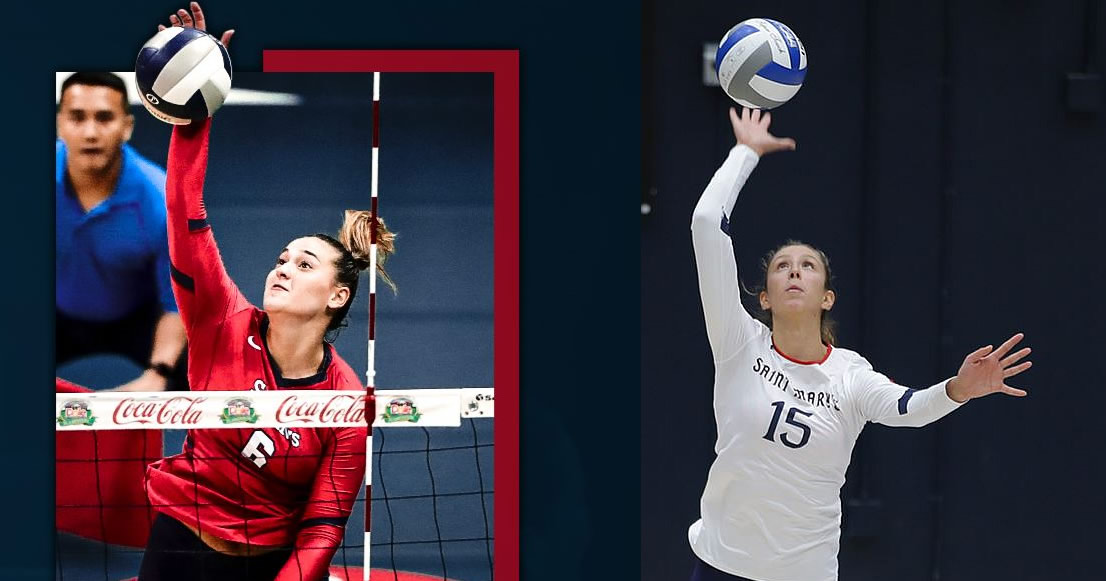 Each team undergoes weekly COVID tests and the games are conducted with a limited number of spectators, implementing health protocols regarding the practice of social distancing and the use of face masks in all indoor areas. The U.S. collegiate championship has adapted to the strict health protocol that needs to be adopted. As a result, all teams have limited their travel to what is absolutely necessary, meaning that they will have to play two to three games each week.

The results are as follows, starting with those who competed in the Fall (Adam, Anagnostou, Karakasi, Tontai, Faki).

Lydia Adam
Lydia Adam of North Carolina State University (4-4), ranking one spot above Faki’s Pitt, demonstrated excellent performances. The nineteen-year-old middle blocker scored 55.5 points, participated in 26 sets, and offered 4 victories to her team. More specifically, Adam had 52 kills, 16 digs, and 7 blocks, with her best appearance being the one against the University of Virginia where she scored 11 points.

Stefania Anagnostou
The University of Arkansas Little Rock (6-14) reached the semifinals of the Sun Belt tournament with Anagnostou scoring 9 points, 5 digs, and 3.5 blocks in 12 games.

Elena Karakasi
Elena Karakasi’s school, Syracuse University, finished 10th in the Atlantic Coast Conference with the Greek setter taking part in 26 of the team’s 27 sets. More specifically, the twenty-year-old attained 269 assists, 22 kills, 4 aces, 49 digs, and 8 blocks, wrapping up the SU season with 4 wins and 4 losses. Elena Karakasi had outstanding performances during her season with her best appearance being that against Faki’s Pittsburgh University where she delivered 51 assists.

Aristea Tontai
Aristea Tontai’s school, University of North Carolina at Chapel Hill, after a very good season with 6 wins and 2 losses, finished 4th in the Atlantic Coast Conference. The twenty-one-year-old middle blocker played in 6 sets throughout her season and scored a total of 9 points, out of which 6 were kills, and 3 were blocks.

Zoe Faki
Another Atlantic Coast Conference team, Zoe Faki’s University of Pittsburgh (4-4) ranked 4th in the nation last year and is still in the Top-20 according to the AVCA coaches’ vote. The Greek outside hitter/right-side started strong after her first match against Karakasi’s school, Syracuse, where she scored 10 kills and 13 defenses, a season high record for her. Faki ended the season having played 25 of the 31 sets, achieving 19 kills, 6 assists, 2 aces, 25 digs, and 4 blocks.

Stella Antypa
On January 22nd and 23rd, Antypa’s Rutgers closed out their series at Northwestern with a double loss of 3-0. The Greek freshman made her maiden appearance on the American court and ended up playing 2 sets.

Christos Gitersos
Opening its 2021 season, Limestone University, overpowered its first opponent (3-1) on January 15th against Saint Francis but fell (1-3) on January 23rd against Belmont Abbey. The twenty-year-old setter participated in all 8 sets of both matches. More specifically, in their victory against Saint Francis, Gitersos scored 7 kills, 32 assists, 1 ace, 5 digs, and 2 blocks, while in their defeat against Belmont Abbey, he obtained 33 assists, 4 digs, and 3 blocks.

Ioanna Charitonidi
Ioanna Charitonidi’s University of Texas Rio Grande Valley is not off to a good start. Nonetheless, the twenty-year-old sophomore will compete this year as a libero and made two very good appearances on January 22nd against UTSA and TAMUCC. In the game against UTSA, Charitonidi had 85% in serve-receive, 4 assists, one ace, and 13 digs, but in the end the Vaqueros dropped their season opener (3-2). Against the home team, TAMUCC, Charitonidi maintained her high percentages, 82% serve-receive, 3 assists, 9 digs, but UTRGV dropped their second match (3-0).

Katerina Papazoglou
Papazoglou’s Temple University opened the season with a 3-2 win over Morgan State University. The senior outside hitter did not play in this game.

Stavroula Papazoglou
Stavroula Papazoglou’s Odessa College started the year on a great note with 3 wins and one defeat. The Odessa Wranglers prevailed 3-0 against Missouri State University, College of Southern Idaho and lost 1-3 to Snow College. It is worth mentioning that Odessa College is ranked at number 5 in the NJCAA Division I rankings for two-year colleges and beat (3-0) last year’s undefeated champions Navarro and number 1 in this year’s voting poll, while their other two victories were over top-20 teams. Their defeat against the current number 2 nationally, Snow College, came after a very intense match with two of the four sets reaching 28 and 26 points.

Chrysanthi Stamatiou
Bellarmine University (1-1) started its brand new NCAA Division I journey on a high note, with a victory (3-0) against Mercer University and a defeat (0-3) against Western Kentucky University in their first two games. Stamatiou made great appearances in her debut, offering a total of 10 points, 8 digs, and 1 block in both games. The Cincinnati undergrad student began her postgraduate degree at Bellarmine University, where she was given a volleyball scholarship and an opportunity to get her master’s degree and represent her new school.