Epic upset for Alexakou-Kathariou and St. John’s against Top-10 Creighton! 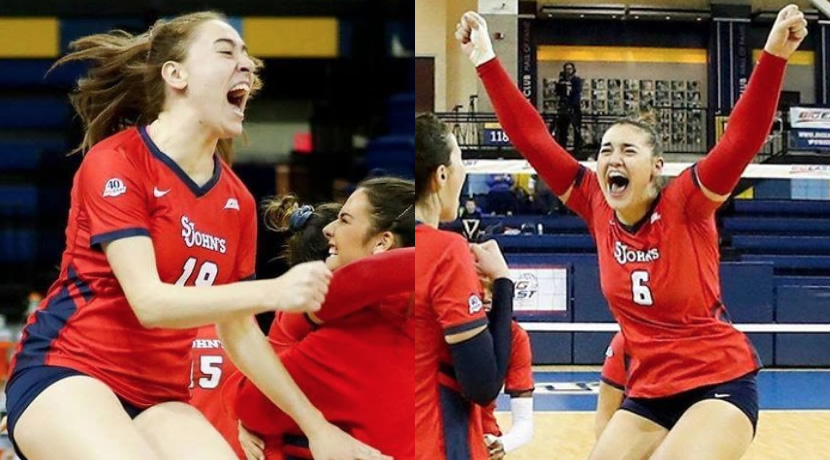 The greatest upset of the 2019 college volleyball post-season took place in the second semi-final of the Big-East Conference Tournament. Giannis Antetokounmpo’s new hometown, Milwaukee, Wisconsin, proved to be good luck for the Greek student-athletes of St. John’s, who went above and beyond and won in straight sets 3-0 (25-17, 25-23, 26-24) against AVCA’s #10-ranked Creighton University. This win is underscored by the following points about Creighton’s value as a volleyball program:

- It has consecutive appearances in the Top-25 over the past several years.

- It was the only team in the US that had won its conference tournament over the past 5 years consecutively.

- It was 13-0 while top-ranked entering the Big East Tourney.

A day after Thanksgiving, November 29/11/2019, on what proved to be an unfortunate Black Friday for Creighton’s storied volleyball program, the Greek volleyball players were instrumental, with Efrosini Alexakou getting 10 kills and 12 digs, while Ariadni Kathariou had 6 points with 5 blocks in critical points of the match, at pivotal moments of games 2 and 3, when Creighton was staging a comeback. Critical were the contributions from the Italian teammates, All-Big East opposite Rachelle Rastelli (13/27 attacks) and All-Big East senior setter Erica Di Maulo (34 assists, 3 points, 4 digs, 2 blocks), with Czech OH Klara Mikelova pitching in 9 kills and 11 digs.

Seasoned veteran head coach Jo Persico had high praise for all her players, and specifically on the Greeks she noted: “The Greeks came ready to play tonight in a big match. They significantly helped and elevated their teammates. We knew our middles had to perform, and Ari delivered at crucial moments, just like Efro always, they led. We thank all Greeks for the continued support. We love them!”

St. John’s is going for its first title in the Big East conference since 2007, against hosts Marquette, another Top-10 and highly respected program nationally. The final match will be underway at 4:30 Eastern, 3:30 Central US on the Big East Conference YouTube Channel.