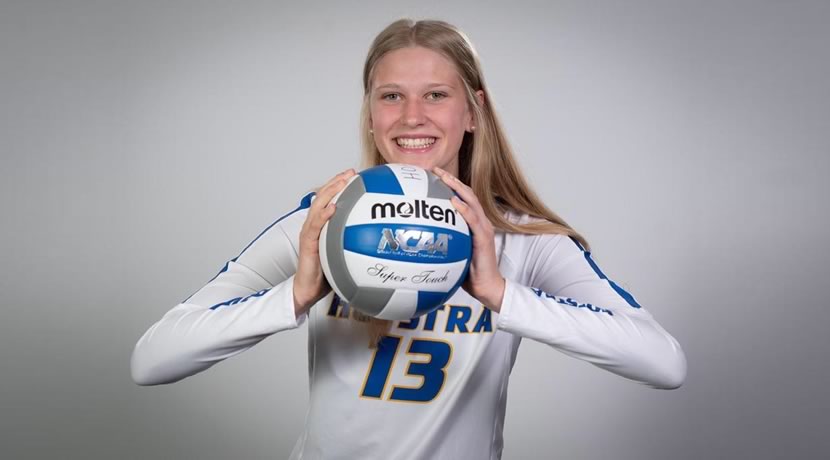 In Ancient Greek Mythology Athina was the Goddess of Wisdom... and War. And in true Greek fashion, Athina Dimitriadis embodies the best of both intellect and athletic competition!

Athina Dimitriadis is a truly cosmopolitan girl, a citizen of the world, with a fascinating life story. Born to a German mom and Greek dad, she grew up in Thessaloniki, Greece, and attended the German School in the second largest city of Greece, broadly known as a melting pot of cultures and rich history.

Academically talented and intellectually gifted as a native bilingual (currently speaking English, French, German, and Greek fluently) she always had diverse interests and a love for athletic competition. Given her 6’5” frame and remarkable athleticism, Athina would grow to attract interest from the highest level of volleyball coaches, eventually becoming the apple of discord between the Greek and German Federations and clubs vying for her attention. Answering the call of the German National Team, she moved to Berlin, Germany, and joined the best athletes in Germany at the internationally acclaimed and well-respected Olympic sports preparation program, enjoying a well-rounded education and high-level volleyball competition. After two intense years of training, further developing her athletic talent, while exceling in her high school courses, she would have outstanding higher education options in Germany, as well as ample professional volleyball opportunities. However, being the true adventurous mind and pursuing continuous self- and world exploration, Athina decided to move to the U.S. and attend Hofstra University, located on Long Island in New York, right outside of New York City, the City of Cities, the Big Apple, the destination of choice for so many hard-working and opportunity-pursuing citizens of the world. 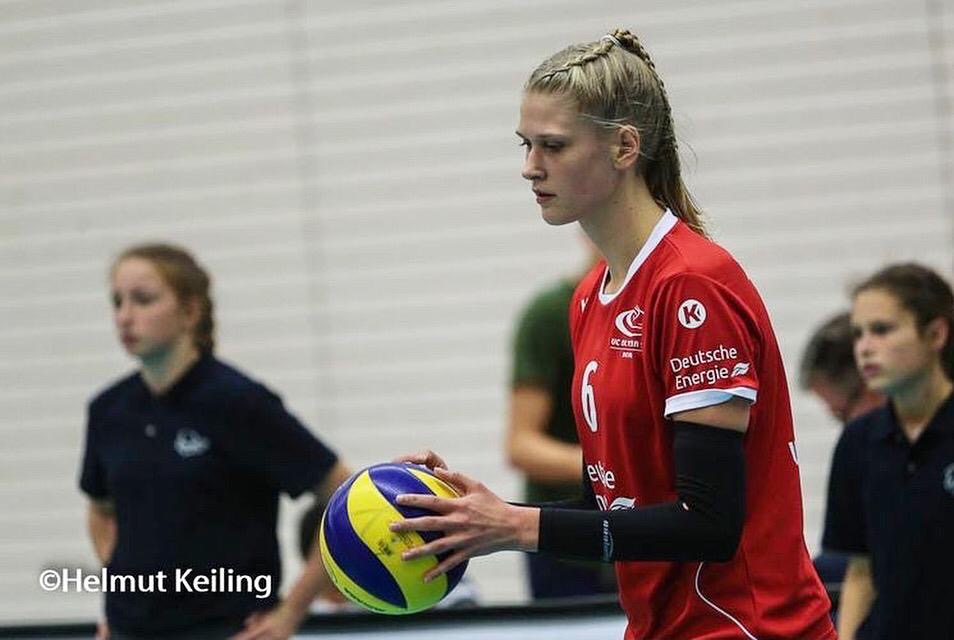 Athina commented about life in the U.S. “Everything is always so well organized! The bus transportation, the food delivery, the practice times. … I had played a tournament with my German team and that was my first impression of the U.S. It is the only way one can go to college and continue playing on a high volleyball level at the same time, because both options are so time consuming. Also, Hofstra University has an amazing reputation and it is an honor to play volleyball and study at this university…”

Hofstra had everything Athina wanted in a school, with a “strong and competitive” volleyball program, a high-ranking and well-respected education, and a great campus location. She found her perfect fit and has molded into the team very well already early in her career. And she had some pleasant surprises…

Athina was not prepared for the amount of attacks she was going to get being a middle on a collegiate team in the United States, yet this makes every day that much more exciting for her. Unlike at home in either Greece or Germany, middles in the U.S. system of volleyball are very involved in the attack and offense of their team.

Athina said, “For me position-wise, it is a completely different game. Back home, middles don’t get set a lot of balls, we get roughly six or seven per game. My maximum on sets in a game in the U.S. [was] 28, unbelievable. It’s a lot of fun hitting that much!” 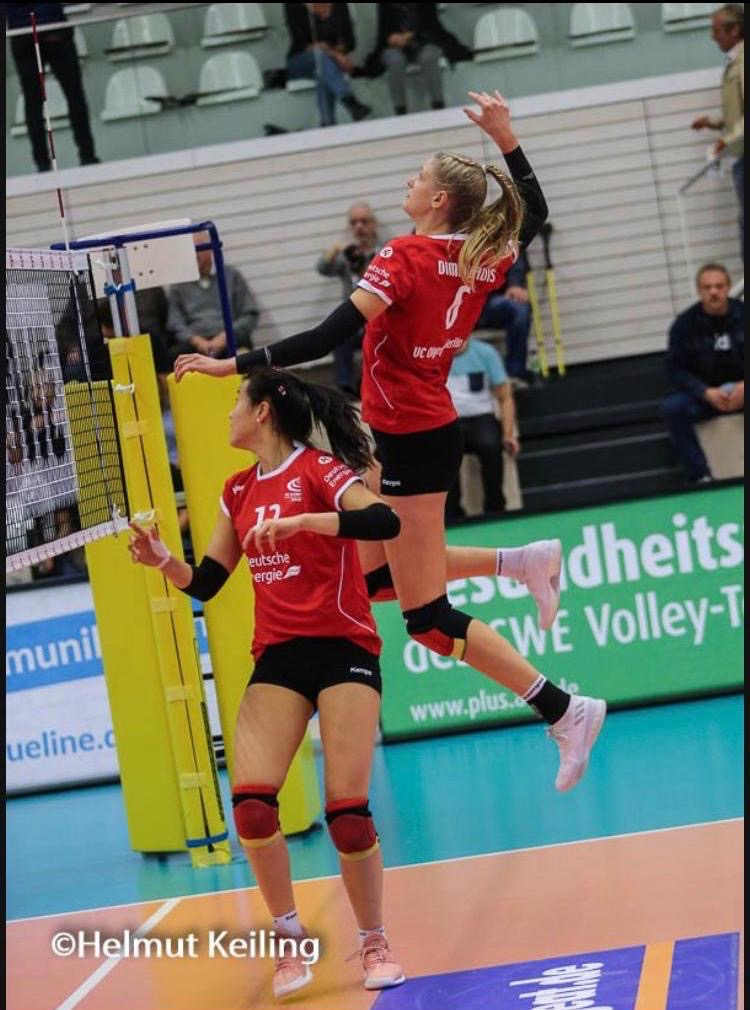 Another difference that she has really liked about American volleyball is that it is more strategic and complicated than back home in Europe. The teams in her league at home all play the same game so there are no surprises when playing a new team, but in the U.S. each team has its own system of play that makes each match “exciting and a new challenge every time.”

Athina said, “My favorite thing so far is my new team and coaching staff. They have all been extremely supportive and helpful in finding my way in this new lifestyle.”

When she got to Hofstra, Athina was “ready to work hard and practice a lot.” It was very important for her to be ready to go from the very start because the collegiate season is a lot shorter than the season for her club team back home in Germany or Greece. Playing so many matches in a shorter amount of time means that she has to be more in shape than before. “Pre-season was tougher than I expected, but you get used to the [level of] practice,” said Athina. 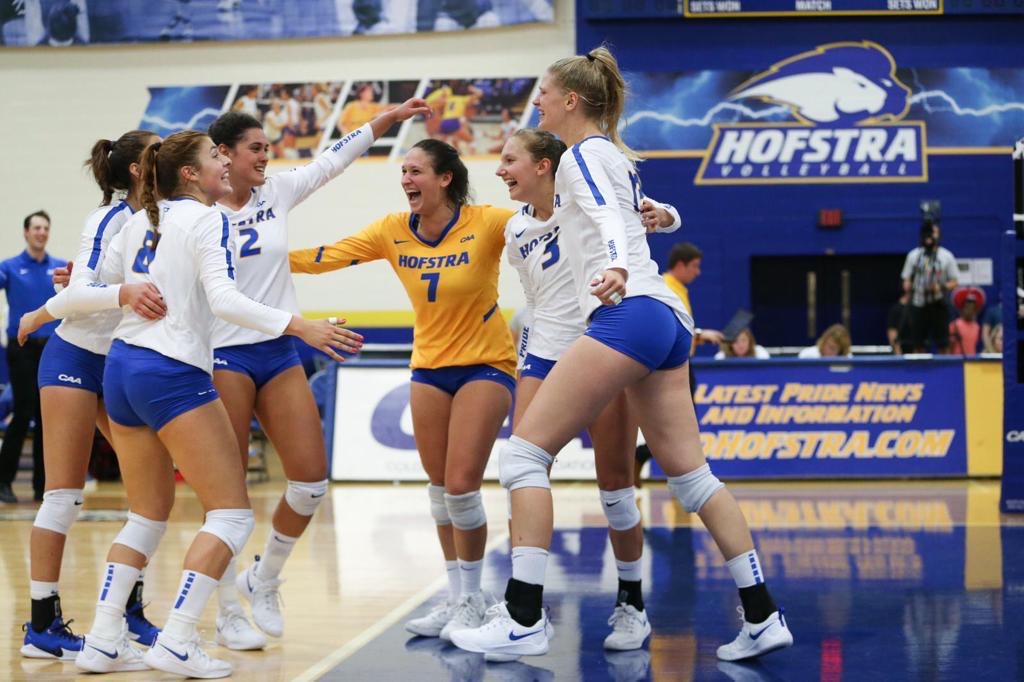 Athina’s advice for anyone considering going to play volleyball in the U.S. is, “love volleyball and be dedicated. Be ready to work hard, take nothing for granted and appreciate [any] help or advice from coaches or teammates. Take risks [at school] because you can always go back if it isn’t the right program for you. [Playing volleyball is] a great opportunity that prepares you for life after college.”

Early on in her career, Athina is making waves for the Pride. In their conference matchup with UNCW on October 13, she had the final two kills in the fifth set to secure the CAA win for her team. In the match, she was third on her team in attacks with 10 of them resulting in kills. As a freshman, she is third on the team with both attacks and kills and is second on the team in blocks.

Playing in the U.S. has already been a wonderful experience for Athina and she said, “Either on or off the court, I know my team has my back. They love and care for me.”