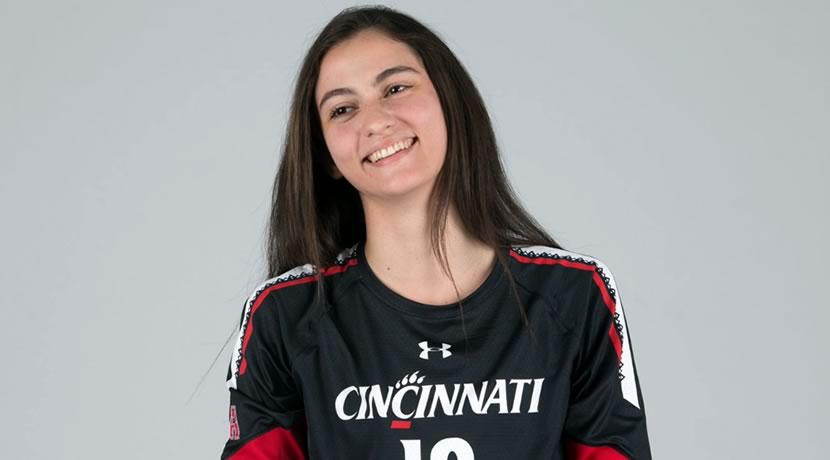 Furthermore, the 1,750 assists are the 2nd best of all time, and it is worth mentioning that it was just the fifth time that the women's volleyball team of the University of Cincinnati played in the 2nd round of the 2018 NCAA Volleyball Tournament. Georgia Tselepi was one of the athletes who realized their dream last summer.

She had great experiences with Hercules Kifissias (2016-2017), Artemis Korydallos (2017-2018) and of course the Greek Youth National Teams of U15, U17, U19, winning the Balkan Championship in 2015, having participated in other Balkan tournaments as well as European leagues in Serbia, Croatia and Hungary. All this prompted the interest of US colleges and Tselepi selected the University of Cincinnati in the summer of 2018. The 19-year-old did well in her freshman season by playing in 16 games (27 sets) and scoring 8.5 points.

She spoke at NOMOS's press office about this experience: “This year we certainly learned how to be more patient when dealing with tough teams and maintaining our temper. Our team did a lot of work inside and out of the stadium, making sure we are prepared for each game. Every goal is difficult to achieve and it is self-evident that we sacrificed a lot as a group but also personally to get here. For example, having a workout at 8 in the morning, it's not easy to be 100% concentrated in the classes that follow soon after. The toughest struggle I would say during the first year was to get used to the new environment.
What I missed most is my friends and family, but I always had in my mind that the months I will go by, and until I see them again it is not that long. The success at the end of my career in Cincinnati would be to spend great academic years and to give my team the best I can”.